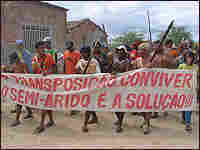 Members of Brazil's Truka tribe protest plans to divert a portion of the waters of the Sao Francisco to the drought-prone impoverished Northeast. Julie McCarthy, NPR hide caption 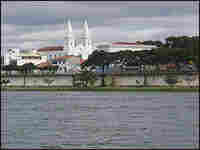 The Sao Francisco River flows 1,600 miles before spilling into the sea. The government says its plans to divert about 1.4 percent of the river in an effort to help millions of people in the drought-stricken northeast. Critics say the government ought to complete the many abandoned public works project began in the past before pressing ahead with another one. Julie McCarthy, NPR hide caption 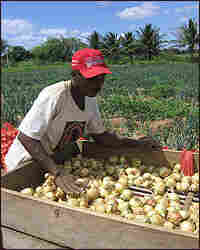 Onion farmers work on the Truka tribe's island in the middle of the Sao Francisco River. The chief of the tribe says the 500-year-old way of life of his people is in jeopardy. Julie McCarthy, NPR hide caption 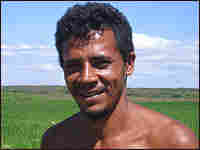 The proposal to divert part of Brazil's mighty Sao Francisco River to the vast drought-prone Northeast epitomizes the debate.

No other river, the Amazon included, has such a hold on the imagination of Brazilians. "Old Chico," as the Sao Francisco River is affectionately, called has been immortalized in folklore and celebrated at Carnival.

Now, this legendary river is at the center of one of Brazil's most ambitious infrastructure schemes to divert some of its waters to the impoverished northeast. The rural areas there are Brazil's poorest, according to the World Bank. But critics variously assail the $2.3 billion venture as a boondoggle, an environmental nightmare, and a vanity project.

Some 2,000 opponents recently gathered along the river in the distressed Northeast state of Pernambuco, where the army has already begun work on the diversion project. Their ranks included fishermen, rural workers, environmentalists, land activists, and laity from the Catholic Church.

They say only 4 percent of the diverted water will go to benefit the rural population in the receiving states.

"We are slowing exposing the plan for what it really is: a benefit for big business—agro-industries, cement and construction companies and, sooner or later, sugar cane for ethanol," says life-long river resident Marina da Rocha Braga, who represents church-backed human rights group Pastoral Land Commission. "All we want is basic sanitation for the general population. It's a fight between David and Goliath."

The federal coordinator of the water project, Romolo Macedo, could not say how much of the water agro-business would get by diverting the Sao Francisco, but he does pose this question to the critics: "What's the problem with agricultural industries benefiting, especially since it's going to provide jobs and wealth? It's the people who are going to benefit."

But Brazil's watchdog on federal spending, known by its Portuguese initials "TCU," concluded that the government's plan to divert part of the Sao Francisco River overestimates the benefits and underestimates the costs.

Attorney Juliana Barros Neves says the planned construction — including two canals hundreds of miles long, pumping stations, and dams — will be especially burdensome for the indigenous groups throughout the region.

"The Constitution states that Brazil's environment and cultural patrimony must be protected, but many indigenous territories are going to be adversely affected by this diversion," Neves says. "International conventions protecting indigenous rights, which Brazil has signed, also say projects that affect tribal regions must have the prior consent of that population. And that did not happen here."

Chief Neguinho Truka says the 500-year-old way of life for his Truka tribe is in jeopardy. The chief says diverting the river would harm the cultivation of meadows and growth of natural forests along the river on which his people depend.

"We fish, we hunt, and it's passed down to generations," he says. "It's our culture. It's our religion. The white man – he looks for God in images, images of saints, of Jesus. Not us. We believe that God is in everything you see here – water, earth, sky, sun, and moon. And if one of these elements disappears for us God is also gone."

Some 4,000 tribe members live on an island that lies in the middle of the strikingly blue Sao Francisco River. It took the tribe decades to win the right to have this 14,000-acre isle designated Truka territory. Now inhabitants fear that any deviation of the river will damage their island home.

Across the flowing water lies the town of Cobrobo, the site of one of two planned canals that would channel some of the river northward. The government says the island is a half a mile away, and any impact would be miniscule.

Macedo points out that the government's plan would divert only 1.4 percent of the Sao Francisco River.

But farmer and father Eraldo Truka, 26, is skeptical. He lives off of his 20 acres of mangos, melons, and rice, and says he's already seen the once plentiful river change.

"We used to have a large variety of fish that today you no longer find here. There is hardly enough fish to eat," Truka says, blaming pollution and large dams upstream that interrupt spawning cycles.

Still he speaks of the sweet simplicity of life on the island and of his desire to hold fast to what's left.

"I earn very little but I'm living. Others earn a lot, but they are dying. So for me, for us, it is good," Eraldo Truka says.

Environmentalists say that municipalities like the one across from the Truka's island routinely dump raw sewage into the river. The government says it does have projects underway to clean up the Sao Francisco, though specific funding levels are hard to come by.

Consultant and environmental planner Andrea Zellhuber says Brazil should provide basic sanitation for millions of residents along the River Basin before even thinking about diverting part of the river.

"You can ask yourself 'What good will this highly polluted water do to the northeastern states?' So there is a kind of inversion of priorities here," says Zellhuber.

Of the president, river resident Ede-Melson Luiz Santos says, "Lula is from the Northeast just like we are. But unfortunately he tore up the flag of the Northeast."

Brazil's National Council of Bishops is expected to petition President Lula to resume a dialogue on the costly public works project plan that, according to the government's plan, would not be completed until 2025.