Accessibility links
Lessons from Wall Street's 'Panic of 1907' On Oct. 17, 1907, panic began to spread on Wall Street after two men tried to corner the copper market. In the months preceding the panic, the stock market was shaky at best; banks and securities firms were contending with major liquidity problems. By mid-October, Wall Street was paralyzed; for days, there were runs on several large banks.

On Oct. 17, 1907, panic began to spread on Wall Street after two men tried to corner the copper market. In the months preceding the panic, the stock market was shaky at best; banks and securities firms were contending with major liquidity problems.

By mid-October, Wall Street was paralyzed; for days, there were runs on several large banks. Millions of dollars were withdrawn, and banks closed their doors. New York City was on the brink of bankruptcy. By 1908, there was a severe but short-lived recession. The man who saved the day was J.P. Morgan, who brought together leading financiers and banks to bail out the ailing market.

That was all in the days before a centralized banking system — and the Federal Reserve — were created to prevent widespread financial catastrophes.

Sean Carr, director of Corporate Innovation Programs at the Darden Graduate School of Business Administration at the University of Virginia, co-authored The Panic of 1907: Lessons Learned from the Market's Perfect Storm, with Darden Dean Robert Bruner. Carr talks with Robert Siegel. 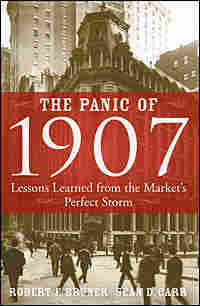 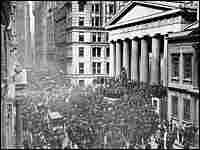 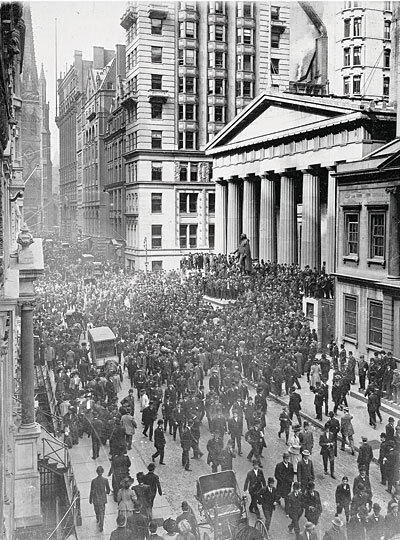 Panic erupts outside the U.S. Subtreasury Building in New York in October 1907. 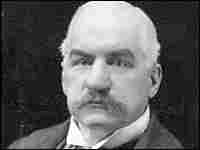 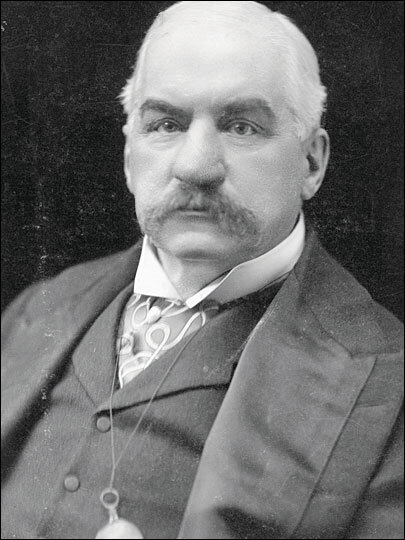 Banker J. Pierpont Morgan played a major role in staving off the panic of 1907.

As Oakleigh Thorne was opening the doors to the Trust Company of America on Thursday morning, October 24, J. Pierpont Morgan was boarding a Union Club brougham drawn by a white horse, which would take him to his offices at 23 Wall Street. By this time people throughout the city had already seen Morgan's picture on the front pages of many newspapers, which had proclaimed him the city's savior. Herbert Satterlee, Morgan's son-in-law, was traveling in the brougham with Pierpont, and he provided a vivid description of the atmosphere surrounding the titan that morning:

All the way downtown people who got a glimpse of him in the cab called the attention of passersby. Policemen and cabbies who knew him well by sight shouted, "There goes the Old Man!" or "There goes the Big Chief!" and the people who heard them understood to whom they referred and ran beside the cab to get a peep at him. Near Trinity Church a way through the crowd opened as soon as it was realized who was in the cab. The crowd moved with us. He might have been a general at the head of a column going to the relief of a beleaguered city such was the enthusiasm he created. All this time he looked straight ahead and gave no sign of noticing the excitement, but it was evident that he was pleased.

People literally filled the streets at the corner of Wall Street and Broad in lower Manhattan. As Morgan descended from the carriage and hurried up the steps of J. P. Morgan & Company, the mob first became quiet, and then they fought their way forward to peer at the man through the windows. When he arrived inside, his office was thronged with men desperate to borrow money. Morgan went directly to his private office where he began a conference with George Baker, James Stillman, and several other bank and trust company officials.

While Morgan conferred with his lieutenants, dozens of vehicles were parking outside the Federal Subtreasury building not far away on Wall Street. After a late-night meeting with Morgan's partner, George Perkins, Treasury Secretary George B. Cortelyou announced his formal support for Morgan, offering to provide $25 million dollars in additional liquidity during the crisis. "Not only has the stability of the business institutions impressed me deeply," Cortelyou said, "but also the highest courage and the splendid devotion to the public interest of many men prominent in the business life of this city."

Throughout the morning on Thursday men carried bags and boxes of gold and satchels of greenbacks from the federal vaults at the Subtreasury to the various banks approved by Cortelyou. Meanwhile, John D. Rockefeller Sr. also called on Morgan to assure him of his willingness to help. Rockefeller deposited $10 million with the Union Trust Company, and promised additional deposits of $40 million, if needed.

The panic, however, had already spread further. An acute shortage of money had occurred on the New York Stock Exchange, and brokers were intensely anxious. At 10 a.m. the interest rate on call money at the Exchange was fairly normal — around 6 percent. Yet sometime later in the morning a bid was made for 60 percent and still no money was offered. By 1 p.m., call money was being loaned at the extreme rate of 100 percent. "It was evident that difficulty was being caused by the calling of loans by a good many trust companies which, alarmed by the run that already had taken place on three companies [Knickerbocker Trust Company, Trust Company of America, and Lincoln Trust Company] were hurrying to strengthen their own cash position," George Perkins observed. An already tight money market was now further strained by the trust companies pulling their cash out of the market. With money so scarce, prices on the Exchange were headed into a tailspin.

Around 1:30 p.m., Ransom H. Thomas, the president of New York's Stock Exchange, and one of his assistants came over to the Corner in a state of great excitement. When he arrived, the offices of J. P. Morgan & Company were full of other agitated men, but Thomas rushed up to the financier and said, "Mr. Morgan, we will have to close the Stock Exchange." Morgan turned to him and asked sharply, "What?" Thomas repeated, "We will have to close the Stock Exchange." Morgan asked, "At what time do you usually close it?" Thomas answered, "Why, at three o'clock." Morgan thundered, "It must not close one minute before that hour today!" emphasizing each word by keeping time with his right hand, middle finger pointing directly at the president of the Exchange.

Thomas then explained that unless a significant amount of money was offered on the stock exchange in a very short time, a large number of failures would result. Morgan said he would take immediate steps to arrange a loan, and he sent Thomas back to the Exchange. The situation only seemed to get more desperate with each passing moment. "One broker after another came into our office, begging us to do something — many with tears in their eyes and others almost weak with the shock of being suddenly faced with failure," George Perkins recalled. "They had the securities on which to raise money but there was no money to be had." Finally, at about 1:45, Morgan asked that all of the presidents of the banks (not the trust companies, this time) be called to his office immediately. The city's bankers started to arrive around 2 p.m.; the moment that the brokers on the Exchange feared most would be in 20 minutes when the Exchange customarily compared all the day's sales and adjusted brokers' accounts. This would be literally a moment of reckoning.

When the bank presidents had finally gathered at the Corner, Morgan explained the situation to them. He said simply that unless they raised $25 million within the next 10 to 12 minutes, at least 50 Stock Exchange houses would fail. James Stillman, president of the National City Bank, promptly offered $5 million; the other bankers quickly fell in line. By 2:16 p.m., Morgan had secured $23.6 million from 14 banks. Within minutes, word of the new "money pool" buoyed the Street, as Perkins later observed:

Our outer office at this moment was filled with brokers awaiting the result of the conference. The bank presidents hurried out of our private offices into these outer offices and someone must have exclaimed that a $25 million fund had been raised because, as I hurried from the office to start the machinery of loaning in motion, I saw some man's hat sail towards the ceiling as he shouted, "We are saved, we are saved!"

When the money hit the market at 2:30 p.m., men clambered over one another to get to the Exchange's "money post" seeking a loan; in the mayhem, even one of Morgan's associates had his coat and waistcoat torn off. The New York Times reported that money brokers scrambled wildly for the funds as fast as borrowers names could be written down, adding that for the first time in 10 days the mood on the trading floor was cheerful. At 3 p.m., when the Stock Exchange closed, there was "a mighty roar of voices" that could be heard from the floor of the Exchange. The members had joined in yelling, "What's the matter with Morgan? He's all right!" followed by three cheers. Of the total raised for the money pool by Morgan on Thursday afternoon, nearly $19 million was loaned out in 30 minutes at interest rates ranging from 10 percent to 60 percent. After the market close, scores of men crowded in front of J. P. Morgan & Company carrying boxes of collateral to secure their share of the pool.

Around 7 p.m. Morgan and Perkins finally left their offices to head uptown. As they started to leave the building, the normally reticent Morgan approached a throng of reporters. Straightening up and squaring his shoulders, he said slowly and earnestly, "If people will keep their money in the banks, everything will be all right." Then he quickly turned, went out the door, and drove uptown.

J. P. Morgan's efforts had kept the Stock Exchange open on Thursday, October 24, but his victory there had not been decisive.

Excerpted with permission of the publisher John Wiley & Sons, Inc. from The Panic of 1907. Copyright (c) 2007 by Robert F. Bruner and Sean D. Carr.