Accessibility links
Knee Replacements, Designed for Women Aging baby boomers are getting their knees surgically replaced. This year, about 300,000 women will undergo the surgery. Subtle differences in female anatomy have led to the development of gender-specific implants. 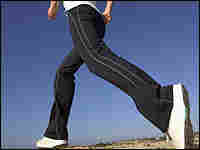 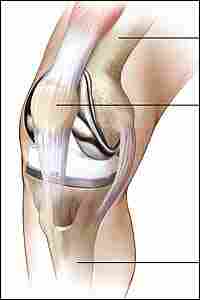 This image shows how the metal-and-plastic knee replacement (shown in gray and white) fits between the thighbone and the shinbone. The kneecap covers the implant in the same way it covered the original knee. Zimmer, Inc. hide caption 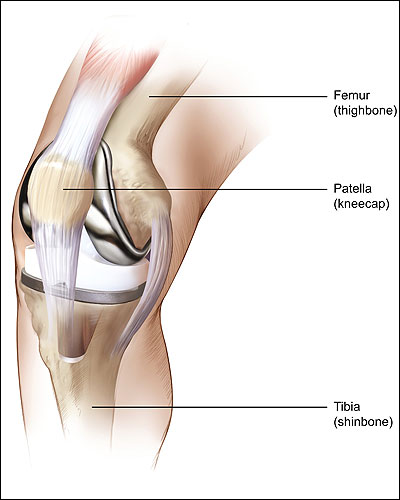 This image shows how the metal-and-plastic knee replacement (shown in gray and white) fits between the thighbone and the shinbone. The kneecap covers the implant in the same way it covered the original knee.

When is the Best Time for Knee Replacement Surgery?

The American Academy of Orthopedic Surgeons does not have specific guidelines on the timing of knee replacement surgery.

Doctors use pain scales to help determine a patient's level of discomfort. They also use MRI and X-ray images, which show evidence of spurs or loss of cartilage resulting from arthritis. Both of these can help inform the decision about surgery.

Younger patients are advised to weigh the advantages and disadvantages of having surgery.

"It's a matter of balancing the loss of function and pain," Robb says, "against the opportunity to feel better, but knowing that at some point in time, further surgery might be needed."

Boomers are beginning to get their knees replaced, and this year, about 300,000 women will undergo the surgery. Subtle differences in female anatomy have led to the development of gender-specific implants.

Kathleen Sheekey, 64, a retired nonprofit executive who lives is Washington, D.C., has always been active.

She plays tennis and loves to travel. But last year during a trip to New York, she realized her knee pain was really slowing her down.

"I would be walking through the Metropolitan Museum of Art," Sheekey says, "and calculating how far away the next bench was... I didn't like that."

Increasingly, Sheekey was relying on taxis instead of walking. As the pain got worse, she relied on a knee brace and pain relievers such as ibuprofen. But she knew her knee was not getting better.

"I think three decades of playing tennis had just worn it down," Sheekey says.

The first orthopedic surgeon that Sheekey saw recommended she wait a few more years before having a knee replacement.

"To which I thought, 'Why?'" Sheekey says she was eager to get on with her life as soon as possible.

He explained to Sheekey that the new gender knee hasn't changed the basic way he performs the surgery. During the operation, he resurfaces or caps the two bones (the thigh and shin bones) that meet at the knee with metal and plastic implants. The gender knees are simply a subtle redesign of older implants.

Unger has performed about 200 surgeries using the gender-specific implants and he thinks they're an improvement.

Sheekey says she's satisfied with the results, and five months out, she's now back to playing tennis — albeit a little more cautiously.

"I don't try to make Hail Mary shots anymore!" Sheekey says. "But when you're in your early 60s, you're not making them anyway. So I'm fine with it. I play for the joy of it." More importantly, Sheekey says she's walking around comfortably, pain-free.

Experts say that Sheekey's strong recovery likely has much more to do with the effort she put into physical therapy after the surgery, and the fact that she was still fairly strong and fit before the operation. The specific implant is less important, they say.

Choosing a Surgeon, and a New Knee

Covington says that many patients call her practice inquiring about the gender-specific knees. One manufacturer, Zimmer, markets its Gender Knee directly to consumers via the Internet.

Covington tells patients that it's just one option. There are more than a dozen manufacturers all making different-sized implants.

"I tell them that they need to have a knee that fits their knee best ... based their anatomy," Covington says. "The gender knee may not be the best fit."

Some surgeons don't use gender-specific knee replacements. Each company that manufactures knee prosthesis products has claims about their designs that make their product appealing to surgeons and patients, says Dr. Robb.

"But in general, among the current prosthesis that are widely used, there's no apparent difference in actual results," he says.

Covington says that choosing a surgeon is the most important decision consumers make.

"You want a surgeon who is fellowship trained in total joint-replacement surgery," Covington says. This means the doctor has completed a post-doctoral fellowship focused exclusively on replacing joints and that they're likely performing at least 150 surgeries per year.

"And you want to ask them what their track record is and complication rate is," Covington adds.

Outcome studies show that, regardless of which implant is used, about 90 percent of knee-replacement surgeries are successful. This means that patients report significantly reduced pain compared with before their surgery. It also means that patients are able to walk up and down stairs with almost the same amount of mobility they had before their knee was injured.

Sometimes surgeries fail because of infection or a failure of the implant.

Eighty percent of the surgeries hold up for 20 years. After that, a repeat surgery will likely be necessary.

It is unclear whether the gender knees will play any role in improving the outcomes. Unger says the competing implants will likely never be compared head to head.