Accessibility links
A Campus Challenge: Handling Underage Drinking New students heading to college this year have worked hard to get to their new schools, but many often have one critical gap in their education: how to handle alcohol. While schools usually try to punish students for illegal drinking, alternative approaches are being suggested. 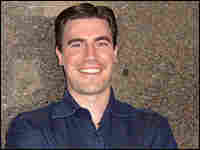 Duke grad Brandon Busteed came up with the idea for AlcoholEdu while he was in school. He consulted with educators, physicians and researchers to develop AlcoholEdu For College. Outside the Classroom hide caption

toggle caption
Outside the Classroom

How Informed Are You?

Check out these excerpts from AlcoholEdu for College programs.

Blood Alcohol Curve Exercise
Blacking Out vs. Passing Out

New students heading to college this year have worked hard to get to their new schools, but many often have one critical gap in their education: how to handle alcohol. Although the legal minimum age for buying alcohol is 21, many colleges turn a blind eye to the drinking that goes on at their campuses.

McCardell says the way laws are currently written, college administrators and parents have two choices when it comes to underage drinking. One is simply to look the other way, which he believes is irresponsible. The other is to punish students for drinking, which drives students to hide the practice and limits possibilities for monitoring their safety.

McCardell's critics say lowering the drinking age will result in more highway deaths. But McCardell says there's a downward trend in highway deaths, thanks to factors such as air bags and tougher drunken-driving laws. Campus binge drinking, on the other hand, has increased.

Many schools are going with a third option: alcohol education programs. One of the most prevalent programs, AlcoholEdu, was founded by a former undergrad event manager at Duke University, Brandon Busteed.

Busteed noticed that it was difficult to draw students to activities where alcohol would not be served. A few years after he graduated from Duke, Busteed developed an online self-assessment that demonstrates the effects of drinking.

School such as the University of Southern California make the AlcoholEdu program mandatory for incoming students. Paula Swinford, director of USC's Health Promotion and Prevention Services, says AlcoholEdu does a good job of correcting misinformation and adding critical information about how consuming large quantities of alcohol could affect the academically ambitious.

"Students will tell me that they are surprised by some of the information, particularly what is 'a drink,' " Swinford says, "because they've been told you can have one drink an hour."

About a million students at more than 450 campuses nationwide have used AlcoholEdu so far.

Swinford says the data so far have shown that the program curbs binge drinking.

"It's a very modest but measurable result around risk reduction," Swinford says, "and [it's] short-term — we really only know about those first few months [of school]. But right now, that's enough for me!"

Choose Responsibility
Outside the Classroom: AlcoholEdu