Accessibility links
CBGB's Hilly Kristal Championed Punk-Rock Spirit Hilly Kristal, the founder of the legendary New York club CBGB, died Tuesday after a battle with lung cancer. He was 75. CBGB was an incubator for punk rock — and became a model for music venues around the world. 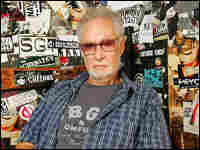 Hilly Kristal, founder of CBGB, sits inside his legendary club in August 2005. The man whose club showcased bands such as the Ramones, Blondie, Talking Heads and Television died Tuesday at age 75. Scott Gries/Getty Images hide caption 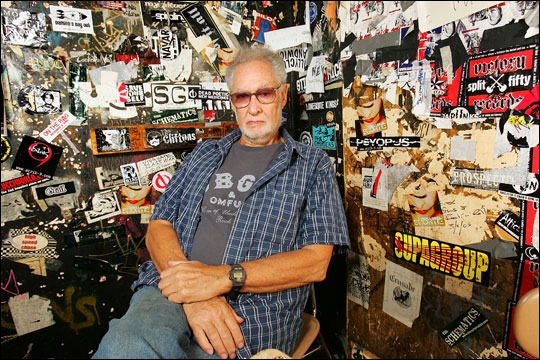 Hilly Kristal, founder of CBGB, sits inside his legendary club in August 2005. The man whose club showcased bands such as the Ramones, Blondie, Talking Heads and Television died Tuesday at age 75. 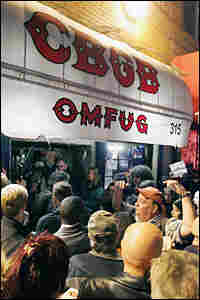 Patti Smith performed at CBGB's last concert on Oct. 15, 2006. The club shut down after a bitter dispute between Kristal and the building's landlord. Bryan Bedder/Getty Images hide caption

Patti Smith performed at CBGB's last concert on Oct. 15, 2006. The club shut down after a bitter dispute between Kristal and the building's landlord.

But that isn't the music that made the nightspot famous: CBGB was an incubator for punk rock — and became a model for music venues around the world.

Kristal, the man behind CBGB, died Tuesday of complications from lung cancer. He was 75.

CBGB got its start in 1973. That's when Kristal moved a club that he ran in the West Village, Hilly's, to the Bowery — and changed the name.

The people who lived in the area — a neighborhood littered with empty wine bottles and flophouse hotel — included poets, artists and punks. And soon as the club opened in late 1973, Kristal says bands started nagging him for a chance to play there.

At first, Kristal says he wasn't very impressed by the band that's perhaps most identified with CBGB, the Ramones.

"They were yelling at each other on stage, and fighting, and their amps would go on and off," Kristal recalled. "It was a fiasco. But they all wanted to play and convinced me again. And of course, they did get better, didn't they?"

The experience with the Ramones helped persuade Kristal to change the club's policy: Only bands that played original music would be allowed to play at CBGB.

It was a time when punk and art-rock bands had few places to perform in New York, and CBGB helped launch dozens of careers, including Blondie, Sonic Youth, the B-52s and Talking Heads.

The first band Kristal booked was Television. At the time, Richard Hell was the bass player. He played many times at the club and says it had a first-rate sound system.

But otherwise, it was definitely a dive: charred, scotch-permeated wood with beer signs and neon leading down to the stage.

"I'm really glad that I was always very drunk by the time they turned the lights on at 4 a.m., because you would not want to see that place with the lights on sober," he says.

Nevertheless, CBGB became an unlikely icon. Kristal bragged that the club was even part of New York City's pitch to attract the 2012 Olympics.

CBGB made it around the world on millions of T-shirts Kristal sold in a shrewd business move that helped finance the club.

But in the end, fame wasn't enough to keep CBGB open. Kristal was forced to close in October 2006 after a bitter dispute with his landlord. Patti Smith performed the last song ever at the club.

Right up until he closed the club, Kristal continued booking bands no one had heard of. He said his advice for those bands never changed: "Don't copy somebody. Do your own thing. You'll like it better if you're a success."