Accessibility links
Breaking Down the, Uh, Blunders of Speech In his new work of "applied blunderology" Um...: Slips, Stumbles, and Verbal Blunders, and What They Mean journalist and linguistics specialist Michael Erard categorizes blunders, investigates why we make them and serves up a generous amount of slips, malapropisms and even Bushisms.

Listen
Breaking Down the, Uh, Blunders of Speech 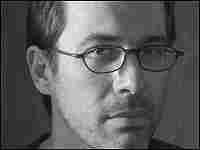 It's an unfortunate reality: the verbal slips, blips, bloopers and blunders that litter our, uh, everyday speech.

Though all those ums and ers and slips of the tongue can seem like meaningless distractions, journalist and linguistics specialist Michael Erard says that ultimately, they follow a regular pattern, like grammar.

His work of "applied blunderology" is called Um...: Slips, Stumbles, and Verbal Blunders, and What They Mean. It categorizes blunders, investigates why we make them and serves up a generous amount of slips, malapropisms and even Bushisms.

George W. Bush's speaking gaffes and his portrayal in the media during his first campaign for president inspired Erard to delve into the history of verbal blunders. He found that there are two main categories of blunders: slips of the tongue and "speech disfluencies." A slip happens when a person loses control over their speaking, and disfluencies – which happen in every language – are interruption and pause fillers like "uh" and "um" that we think should constitute smoothly flowing talk.

From the blundering Rev. William Archibald Spooner — the famously soapy-tongued warden of New College in Oxford — to Sigmund Freud and Allen Funt of Candid Camera, Erard studies famous verbal slips through history. But he also shows that verbal gaffes are an indelible mark of humanity.

Excerpt: 'Um: Slips, Stumbles, and Verbal Blunders, and What They Mean' 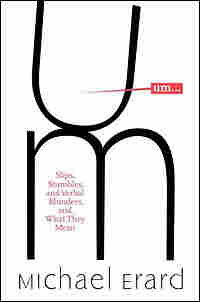 Chapter 1: The Secrets of Reverend Spooner

If the world of verbal blunders were the night sky, the Reverend William Archibald Spooner of Oxford University could play the role of the North Star. Spooner, who was born in 1844, was famous for verbal blundering so incorrigible that his exploits have been immortalized in poems and songs and, most enduringly, by lending his name to a type of slip of the tongue he was unusually prone to make. In the spoonerism, sounds from two words are exchanged or reversed, resulting in a phrase that is inappropriate for the setting. For Spooner, these embarrassments ranged from wild to mild. Toasting Queen Victoria at dinner, Spooner said, "Give three cheers for our queer old dean," and he greeted a group of farmers as "noble tons of soil." There was the time he cautioned young missionaries against having "a half-warmed fish in their hearts." He described Cambridge in the winter as "a bloody meek place." Once Spooner berated a student for "fighting a liar in the quadrangle." "You have hissed all my mystery lectures," he reportedly said. "In fact, you have tasted two whole worms and you must leave Oxford this afternoon by the next town drain." A spoonerism can also involve the reversal of two words, as in "Courage to blow the bears of life," or, when saying good-bye to someone, "Must you stay, can't you go?"

Undergraduates at Oxford University were playfully fond of Spooner, whom they nicknamed "the Spoo." They also coined the term "spoonerism" around 1885, after Spooner had been a fellow at New College for almost twenty years. By 1892, his reputation for absentmindedness was well known; students came to New College expecting to hear a spoonerism. "Well, I've been up here for four years, and never heard the Spoo make a spoonerism before, and now he makes a damned rotten one at the last minute," wrote one student. (Spooner had assured students that experience would teach them that "the weight of rages will press harder and harder upon the employer.") Spooner himself knew of his public image. Privately he referred to his "transpositions of thought." At the end of a speech he once gave to a group of alumni, he said, "And now I suppose I'd better sit down, or I might be saying—er—one of those things." The scientist Julian Huxley (a New College fellow under Spooner for six years), who was present at the scene, said that the audience reacted with "perhaps the greatest applause he ever got."

The British humor magazine Punch called Spooner "Oxford's great metaphasiarch." Spooner's reputation was also carried beyond Oxford and even out of England by newspapers' joke columns, funny pages, and "quips and quirks" sections. One example of screwy language from around this time is an 1871 collection by the American writer C. C. Bombaugh, titled The Book of Blunders. Though it didn't mention Spooner, Bombaugh's book promised a grab bag anthology of "Hibernicisms, bulls that are not Irish and typographic errors." In addition to slips of the printing press, Bombaugh included slips of the telegraph. A French cleric was once greeted at the train station by a funeral bier—intended for him—because the telegraph operator had mistaken Père Ligier et moi (Father Ligier and I) for Père Ligier est mort (Father Ligier is dead). One New Yorker ordered flowers from a florist in Philadelphia, telegraphing a need for "two hand bouquets," which the telegraph clerk printed as "two hund. bouquets." When the New Yorker refused to pay for 198 unwanted bouquets, the florist sued him and lost. Then the florist sued the telegraph company and (according to Bombaugh) won. Such were the legal liabilities of a verbal blunder. On the face of it, slurs against the Irish and accidents of typography seem to have little in common. Yet the opportunity to mock and laugh about either one neutralized the perceived threats of immigrants and technological change.

The public's taste for outrageous jabberwocky may have predated Spooner, but his sayings appeared so frequently and widely that the spoonerism was known around the English-speaking world early in the twentieth century. On a visit to South Africa in 1912, Spooner said in a letter to his wife that "the Johannesburg paper had an article on my visit to Johannesburg, but of course they thought me most famous for my Spoonerisms, so I was not greatly puffed up." In the 1920s, Spooner encountered an American woman at a concert who asked if he was Dr. Spooner. As Spooner wrote in his diary, "She replied I was the best known name in America except Mr. Hudson Shaw [sic] . . . to have known a celebrity, even the author of 'Spoonerisms' means a good deal, tho' I explained to her that I was better known for my defects than for any merits."

In all, Spooner spent almost sixty years as a member of New College, starting as a student in 1862, then as a fellow in 1867. To get the position, he had to take an oral exam, which he not only passed but excelled at. He ascended the ranks until he became warden, a sort of chaplain, from 1903 to 1924. He was married, had seven children, and lived in a sixteen-bedroom mansion staffed with eleven servants. When he was fifty-two years old, he tried to learn to ride a bicycle. (Or "a well-boiled icicle," as he put it.) He was also a revered classics scholar and a respected school leader. He had a rare gift, said Huxley, "of making people feel that he was deeply interested in their own particular affairs." As an albino ("not a full albino with pink eyes," Huxley remembered, "but one with very pale blue eyes and white hair just tinged with straw color"), Spooner had horrifically poor eyesight and could read only with his eyes several inches from the page. He also spoke with a squeaky, high-pitched voice and said "uh" a lot—perhaps because he was trying to avoid making the slips he'd become famous for.

"He looked like a rabbit, but he was brave as a lion," said the historian Arnold Toynbee. Spooner himself was more modest. "I am, I hope, to some extent a useful kind of drudge," he wrote in a letter, "but not a ruler of men."

Spoonerisms are the comfortable shoes of slips of the tongue: when it comes time to illustrate the universality speech errors, they're so familiar and broken in, they always get a laugh. Far from the funny pages, though, they exhibit properties that have been observed in Latin, Croatian, German, English, Greek, and French (among other languages). Spoonerisms all work the same way: the reversed sounds come from the beginnings of the words, rarely at the ends, and very often from the syllable that carries the stress. Spooner wouldn't likely have accused a student of "righting a file in the quadrangle" or announced the hymn in chapel as "conkingering kwers their titles take."

The scientific name for a spoonerism is an exchange, or in the Greek, metaphasis. Just as the word "Kleenex" now refers to all paper tissues, "spoonerism" serves as the blanket term for all exchanges of sounds. In general, consonants are more often transposed than vowels. As the psychologist Donald MacKay has observed, the sounds reverse across a distance no greater than a phrase, evidence that a person planning what to say next does so at about a phrase's span in advance. Cognitively it would be nearly impossible for Spooner (or anyone else) to say something like, "For womework tonight you will read and translate the first page of Caesar's Gallic Whores."

We might want to distinguish the spoonerism from the more generic exchange—certainly there's a difference between one that results in two actual words (as in, "May I sew you into a sheet?") and one that results in nonsense (as in praying that the congregation would be filled with "fresh veal and new zigor"). The distinction is necessary because it raises a legitimate linguistic question: do slips of the tongue like these produce real words more frequently than they result in nonwords? The implication is that if real words ("sew you into a sheet") are more frequent, then how our minds produce words becomes a bit clearer. Specifically, it suggests that in the rapid processes involved in thinking and speaking, a speaker inspects a word as a whole, not as a sequence of specific sounds. Thus, a word that "looks right" to the speaker—or, more precisely, to a sort of internal editor or blunder checker—will be cleared for pronouncing, like planes are cleared for takeoff. In fact, studies have shown that people tend to make more speech errors that involve individual sounds and produce legitimate words.

Excerpted from Um. . . by Michael Erard Copyright © 2007 by Michael Erard. Excerpted by permission of Pantheon, a division of Random House, Inc. All rights reserved. No part of this excerpt may be reproduced or reprinted without permission in writing from the publisher. 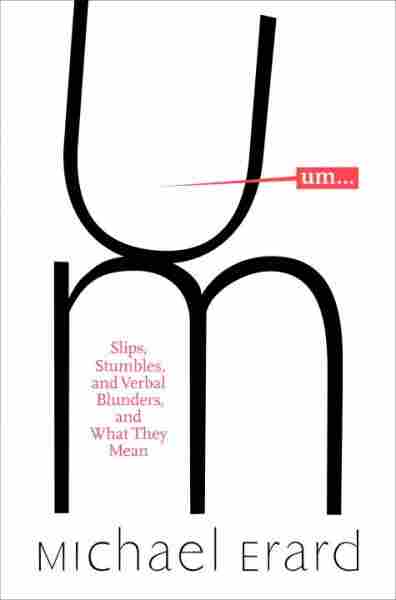 Slips, Stumbles, and Verbal Blunders, and What They Mean