Accessibility links
Bangkok: A Family Affair Delivers Sublime Thai Food Some of the most delicious dining in Bangkok is to be found at Chote Chitr, a 90-year-old family-owned hole-in-the-wall eatery, says Southeast Asia correspondent Michael Sullivan. Its modest surroundings belie the accomplished dishes. 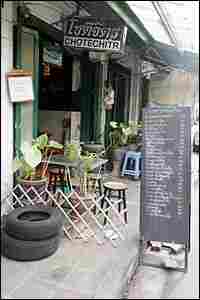 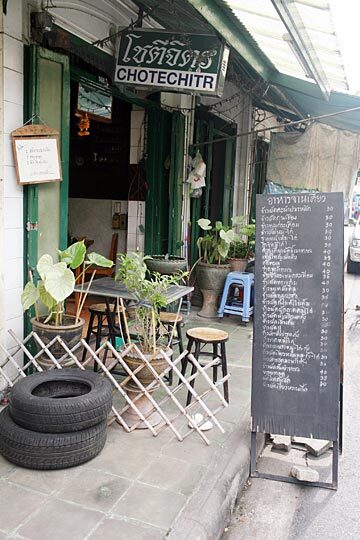 Chote Chitr is a 90-year-old family-owned restaurant in a quiet Bangkok neighborhood. 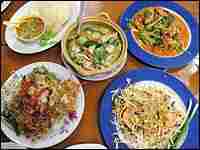 Curries, noodles and salads are among the 400 or so items on the menu at Chote Chitr. hide caption 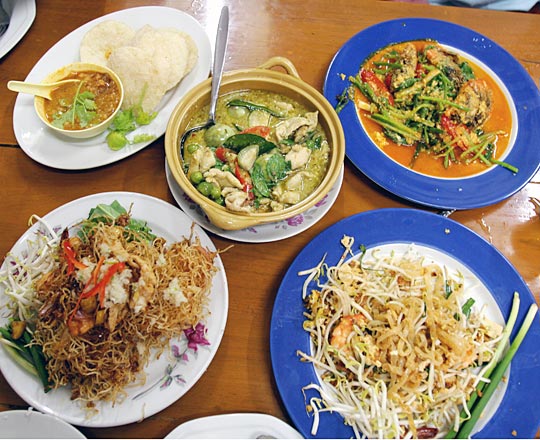 Curries, noodles and salads are among the 400 or so items on the menu at Chote Chitr. 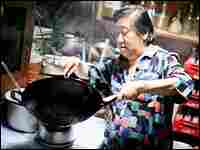 Tim Krachoichuli, owner of Chote Chitr, doubles as the restaurant's cook and prepares all the dishes — except the salads, which her sister makes. Chris Brown for NPR hide caption 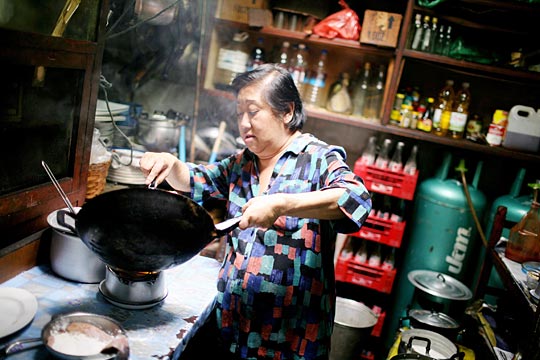 Tim Krachoichuli, owner of Chote Chitr, doubles as the restaurant's cook and prepares all the dishes — except the salads, which her sister makes. 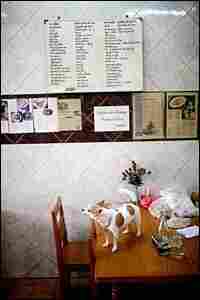 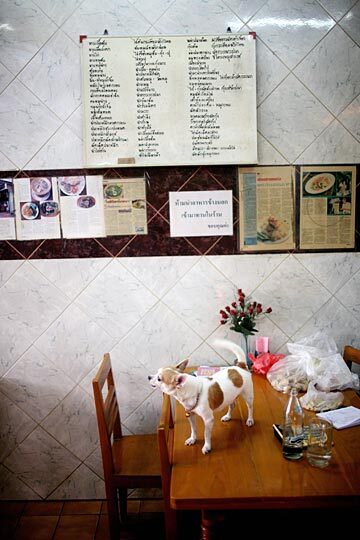 The well-heeled visitor can eat very well in Bangkok — in fancy surroundings, at tastefully appointed fusion restaurants, with the attentive, sometimes fawning service many have come to expect on a visit to the Far East.

But where's the fun in that?

Instead, make a pilgrimage to a more modest eatery, Chote Chitr, for what is likely to be some of the best Thai food you've ever eaten.

The family-owned hole-in-the-wall has just five tables. There's a fan overhead and two Shih Tzus and a small Chihuahua underfoot, who belong to Tim Krachoichuli, the restaurant's owner.

The menu is written on the wall in Thai — most of it, anyway. Krachoichuli says there are about 400 items on the menu, and she'll take requests, too.

Her grandfather opened the place more than 90 years ago, and it's been at the same location — near the Democracy Monument — ever since. It's one of the few parts of Bangkok where zoning restrictions have put limits on development.

The result is a delightfully pleasant neighborhood of two-story houses and shops that retains much of the flavor of turn-of-the-century Bangkok, far from the traffic and pollution-choked sois, or side streets, of central Sukhumvit Road.

Though a little tricky to find, Chote Chitr is enormously popular with middle-class Thais and foreigners, too. And the framed reviews on the walls from the latter — including the late gourmet R.W. Apple of The New York Times — speak volumes about the food, which is easy to consume in great volume.

In my case, I did it with a little help from my friend and colleague, photographer Chris "Will Work for Food" Brown. We went at about 2 in the afternoon — a good time to beat the crowds that otherwise pack the place at lunchtime or dinner, when a wait for a table is pretty much guaranteed.

We started with the kaotang nahtang, a simple rice cake with what looked like Thai salsa on the side, until you dip and discover the "salsa" is really a rich, red mix of coconut milk, shrimp, pork, onions, salt and sugar.

Krachoichuli explained that her banana flower salad is better because other restaurants boil their banana flowers beforehand. Ours, she says, are made fresh every morning.

I have no idea what that means, but I know it was delicious — as were the mee krob noodles, which are at once crunchy, sticky, spicy and sweet and are seasoned with lemongrass, lemon juice and other tangy Thai citrus.

The prik king — dried pork with green beans in a red curry sauce with salt fish, sugar, water and oil — was an unexpected pleasure. The duck with red curry was also outstanding, with tiny Thai eggplant and Thai basil. The sleeper of the bunch was the dried yellow curry with Thai celery, shrimp, coconut milk, eggs and a little prik pao, or chili, paste.

None of the dishes was overwhelmingly spicy. Instead, they struck a near-perfect balance between sweet and sour, spicy and bland. And none — not even the dried pork or duck curries — seemed heavy. Krachoichuli says that's because she uses less oil in her dishes than most.

The only thing I didn't like was the fried rice with dry shrimp. The secret ingredient, preserved eggs, is popular with Thais and ethnic Chinese throughout Southeast Asia, but it wasn't for me — too pungent, too overpowering, but easily rectified with a healthy pull on an ice-cold Singha beer.

All the cooking is done on a couple of small burners in the back of the eatery. Krachoichuli takes your order and prepares it, too — except for the salads, such as the signature banana flower salad.

"My sister does those," Krachoichuli says. "She's just better at it."

Fifty-four-year-old Krachoichuli and her two sisters do everything: the shopping, cooking and cleaning. There are no plans to expand; she fears the quality of the food would suffer.

And when they grow tired of doing this, she says, that'll be it for the restaurant, too. There are no husbands, no children, no heirs — and no plans to sell the business to anyone else.

Get here fast and enjoy it while you can. It won't cost much, either. We ate until we couldn't. A staggering 10 entrees, including an enormous wok-fried fish, two large Singhas and a simple dessert set us back less than $25 — for two.