Accessibility links
New Orleans School Signals Reborn Community The New Orleans neighborhood of Broadmoor has made a remarkable recovery from Hurricane Katrina, thanks to the efforts of determined local activists. So when the city failed to rebuild their public school, the community opened their own charter school. 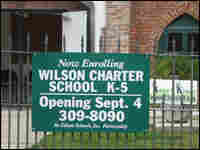 A sign outside the old McDonough 7 School in New Orleans announces the opening of the Wilson Charter School. Activists in the Broadmoor neighborhood started the school when they couldn't get the city to rebuild their local public school. Larry Abramson, NPR hide caption

Last spring, Latoya Cantrell, a resident of New Orleans' Broadmoor neighborhood, stood in front of what would be the coliseum of the neighborhood — the derelict building that used to house Andrew Wilson Elementary.

Back then, Cantrell was mad that the building had sat moldering since it was flooded by Hurricane Katrina. But she was confident that with her take-no-prisoners style, she could single-handedly persuade the state to renovate the school. She had already helped bring two-thirds of Broadmoor residents back to a neighborhood the city was ready to bulldoze.

But recently, Cantrell admitted that she has failed get the school rehabilitated, and that she may have to turn to the private sector.

"This community cannot lose our public school," she says. "Once it's gone, it's gone. So if we're not selected, then we move forward with raising those dollars to renovate."

Cantrell and other members of the community are convinced they cannot revive the Broadmoor neighborhood without a school. So, in the meantime, they've started a charter school in another building just two miles away.

That has been a success.

The temporary home for the Wilson Charter School is the old McDonough 7 Elementary School, a grand, 130-year-old building. It looks more like a church than a school, comfortably surrounded by the homes of this quiet neighborhood off Napoleon Avenue. A few weeks ago, workmen were busy putting together desks, and painters were putting the finishing touches on the resurrected building.

"This feels wonderful. It's like a dream come true," said Connie Yeaton, President of the Broadmoor Charter School Board. She is there to make sure the school is cleaned and painted in time for opening day.

"I hope the whole school board's here with us," Yeaton adds. "And I know we're going to have a lot of excited mamas and daddies."

A Symbol of Resilience

Sheila Thomas, a former New Orleans principal and local resident has come out of retirement to lead Wilson Charter School. And while it will be run as a charter, under the direction of for-profit Edison Schools, Thomas says she feels like just another school principal.

"Whether we're an Orleans Parish public school, a recovery school or a charter school, if all of us don't succeed, then really, none of us succeed," Thomas says.

Thomas shows off a fish tank in the cafeteria, a treat to welcome the kids on the first day of school. It's perhaps symbolic of the school's — and Broadmoor's — resilience.

"The aquarium was brought in by a neighborhood woman who put it together and, whether you would believe this or not, those fish survived Katrina," she says.

This school is beginning to feel like home. But for Broadmoorians, it's still a temporary home, a place-holder, until they can bring back the real Andrew Wilson Elementary.

For One New Orleans School, an Uncertain Future May 17, 2007