Accessibility links
Documenting the Duke Rush to Judgment When three Duke lacrosse players were wrongfully indicted for raping a black stripper in 2006, there was a stampede by the media, members of Duke faculty and one overzealous prosecutor to prove them guilty, say authors Stuart Taylor and KC Johnson. They investigate the case in their new book, Until Proven Innocent.

In the aftermath of the Duke lacrosse rape case, lawyers in North Carolina are learning lessons from the faulty rush to judgment against three college athletes.

From the start, when players Reade Seligmann, David Evans and Collin Finnerty were wrongfully indicted for raping a stripper in 2006, there was a stampede by the media, some members of Duke faculty and one overzealous prosecutor to prove them guilty, say authors Stuart Taylor and KC Johnson.

In their new book, Until Proven Innocent: Political Correctness and the Shameful Injustices of the Duke Lacrosse Rape Case, Taylor, a columnist for National Journal, and Johnson, a history professor at Brooklyn College and CUNY, document the facts of the case and how they were misconstrued to assume guilt.

The players were accused of kidnapping, raping and assaulting a black exotic dancer who performed at a team party. North Carolina's attorney general dropped all charges against all three. The case's lead prosecutor, former Durham County District Attorney Mike Nifong, was disbarred after an investigation found that he broke several rules of professional conduct, including lying to both the court and bar investigators and withholding critical DNA test results from the players' defense attorneys.

In the book, authors Taylor and Johnson interview the three defendants, their families and their legal teams, but they also focus attention on Duke's administrators and faculty, who they say hung the lacrosse team members out to dry.

The book singles out several Duke faculty members who were particularly scathing in their attacks against the players. Local and national media also come under scrutiny for their slowness in accounting for the publicly available evidence.

Scott Simon spoke with Stuart Taylor about the questions the Duke case raised about the culpability of the press and the climate on many American campuses. 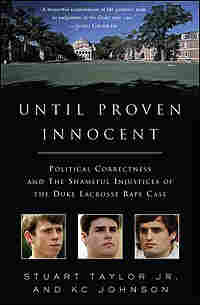 Like the media, many professors—and not only the radical fringe—were initially swayed by Nifong's public comments and the initial silence from the lacrosse players. All but ignored were the captains' March 16 cooperation with police, their confident March 28 prediction that the DNA would soon clear them, the similar predictions by defense lawyers, and the unlikelihood that they would go out on such a limb without strong reasons for confidence that no rape or sex of any kind had occurred.

But while many of the journalists misled by Nifong eventually adjusted their views as evidence of innocence and of Nifong's conduct came to light, the activist professors did not. Resolutely refusing to reconsider their initial presumptions as new facts emerged, they served as enthusiastic cheerleaders for Nifong, with whom they had little in common besides their opportunism. For many months not one of the more than five hundred members of the Duke arts and sciences faculty—the professors who teach Duke undergraduates — publicly criticized the district attorney or defended the lacrosse players' rights to fair treatment. Not even after enough evidence had become publicly available to establish clearly both the falsity of the rape charge and the outrageousness of Nifong's actions—widely seen as the worst case of prosecutorial misconduct ever to unfold in plain view.

The majority of Duke's arts and sciences faculty kept quiet as the activists created the impression that Duke professors en masse condemned the lacrosse players. Several months later, John Burness explained their silence: "I think people just go about their business doing what they do and were not paying attention." But, as some admitted privately to friends, they were also afraid to cross the activists—black and female activists especially—lest they be smeared with charges of racism, sexism, classism, homophobia, or right-wingism.

That's what would happen to a chemistry professor who—months after the team's innocence had become clear—became the first member of the arts and sciences faculty to break ranks with the academic herd. It took less than twenty-four hours for the head of Duke's women's studies program to accuse him of racism in a letter to The Chronicle.

Leading the rush-to-judgement crowd at Duke was Houston A. Baker Jr., a professor of English and of African and African-American Studies. He showed his mettle in a March 29 public letter to Duke administrators that boiled with malice against "this white male athletic team" —a team whose whiteness Baker's fifteen-paragraph letter stressed no fewer than ten times. He demanded the "immediate dismissals" of all lacrosse players and coaches, without acknowledgingtheir protestations of innocence or the evidence. He assailed "a 'culture of silence' that seeks to protect white, male athletic violence." He denounced the lacrosse players as "white, violent, drunken men . . . veritably given license to rape, maraud, deploy hate speech." He bemoaned their alleged feeling that "they can claim innocence and sport their disgraced jerseys on campus, safe under the cover of silent whiteness." Treating as gospel Kim Roberts's transparently bogus 911 report of being pelted with multiple racial epithets as she drove (or walked) past the lacrosse house, he asserted that the lacrosse players' "violence and raucous witness injured [a black woman] for life." He stereotyped them as embodiments of "abhorrent sexual assault, verbal racial violence, and drunken white, male privilege loosed amongst us."

For such insights, Baker was in demand among TV hosts such as MSNBC's Rita Cosby and CNN's Nancy Grace. He was also quoted in newspapers local and national, including The New York Times and USA Today.

Baker provided a window both into his soul and into the indifference of many academics to fact after a critic e-mailed him, "You will owe a big apology when the truth comes out, but I doubt you will be man enough to issue it."

Retorted the professor: "Who is really concerned about whether a woman was actually raped or not? Are you a perfect idiot?" Baker tossed out a litany of false charges of misbehavior by lacrosse players, such as that they had "beat up people who were gay," before closing:

"ALL of 'official' American history is a lie, Pal!! Where did YOu [sic] go to school??? . . . Good lorad [sic], all you people think you an [sic] go 'ah hah,' and the polar caps will not melt, or the levees will hold. You live in a white supremacist fantasy land. . . . Whew! Have you read recently? Anything? . . . And, get over yourself, buddy. Get smart before you write to a professor, OK. Read SOMETHING."

In a subsequent (June 10) e-mail, Baker wrote, with no basis in fact, that "46 white guys on the Lacrosse Team at Duke . . . may well have raped more than one woman." And in still another e-mail, sent to the mother of a lacrosse player, Baker called her son and his teammates "farm animals."

Despite such displays of viciousness, Baker was a big deal in the academic world. A past president of the Modern Languages Association (the major academic organization of English professors), Baker was such a big name in academia that Vanderbilt would hire him away from Duke at the end of the academic year. The chair of Vanderbilt's English Department, Jay Clayton, hailed his new hire as "one of the most wide-ranging intellectuals in America today in any field of the humanities. He is prolific and writes to an audience far broader than academic specialties."

Excerpted from Until Proven Innocent by Stuart Taylor Jr. and KC Johnson. Copyright © 2007. All rights reserved. No part of this excerpt may be reproduced or reprinted without permission in writing from the publisher. 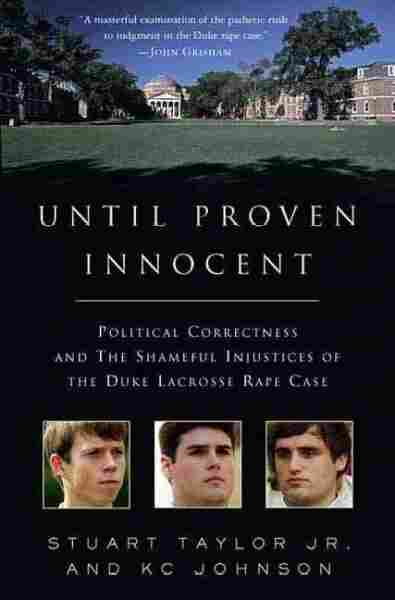