Accessibility links
Mexico's Peyote Endangered by 'Drug Tourists' Peyote has long been used in sacred rites by Mexican Indians. Now, the Mexican government and Indian leaders warn that the hallucinogenic cactus is under threat from tourists who consume it recreationally. 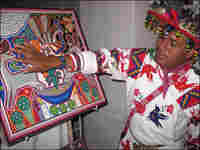 Andres Carillo, a Huichol Indian shaman, uses the peyote plant to create these artworks depicting the visions he has after consuming the cactus. The Huichol have asked the Mexican government to protect their sacred sites and the peyote plant from overharvesting. Adam Thomson for NPR hide caption 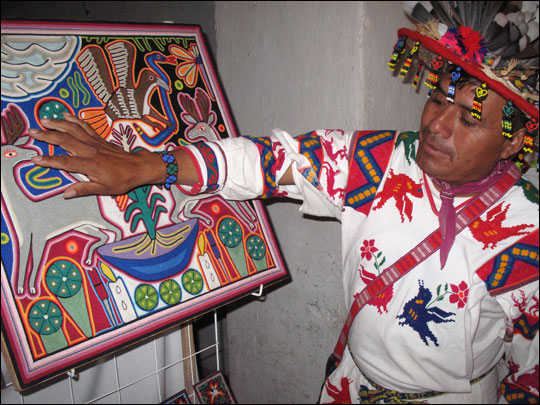 Andres Carillo, a Huichol Indian shaman, uses the peyote plant to create these artworks depicting the visions he has after consuming the cactus. The Huichol have asked the Mexican government to protect their sacred sites and the peyote plant from overharvesting. 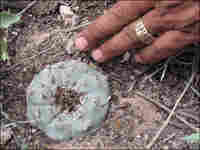 A guide points to a peyote cactus near the town of Real de Catorce. The peyote is in danger of extinction in this part of the country because so many foreigners harvest it illegally for drug trips. Adam Thomson for NPR hide caption 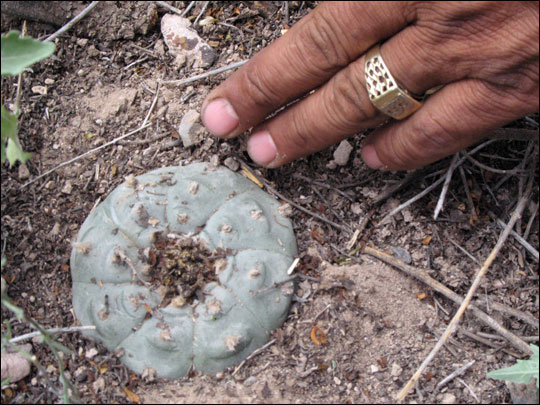 A guide points to a peyote cactus near the town of Real de Catorce. The peyote is in danger of extinction in this part of the country because so many foreigners harvest it illegally for drug trips.

Though peyote — a hallucinogenic cactus — has been used for hundreds of years by Mexican Indians, it only became popular outside of indigenous communities after Carlos Castaneda, then a student at the University of California, Los Angeles, wrote The Teachings of Don Juan in the 1970s. All of a sudden, Americans, Europeans and other foreigners began making pilgrimages to Mexico to hunt for peyote and consume it recreationally.

Now, the Mexican government and the Indian community that uses peyote in sacred ceremonies are warning that peyote is under threat.

Peyote is the attraction for many of the foreigners who flock to Real de Catorce, a former silver-mining town high in the mountains in the state of San Luis Potosi in northern Mexico. In the central square, rings, necklaces, broaches and bracelets for sale at a jewelry market seem to feature one central design: the peyote cactus.

At Armando Garza's stand, woven bands made of hemp surround ceramic peyotes. Garza says he came to Real de Catorce several years ago to take peyote and decided to stay.

"People like to come here to take peyote because it has a very long history, it's a natural plant with properties ... and it allows you to understand the Indian culture and that way of life — a different perspective on things," Garza says.

Even though peyote can be found from the southern United States to central Mexico, the desert area near Real de Catorce is the most important for the sacred rites of the Huichol, also called the Wixarika Indians, who are animists.

Several times a year, the Huichol make a pilgrimage on foot from their communities in neighboring states to the area. In specific places on the journey, their shamans consume peyote, which they believe allows them to communicate with their gods.

It has been harder and harder for them to find their peyote along the way, so this year, the Huichol asked the Mexican government to designate their route a protected area.

"If peyote disappears, then their whole culture disappears," says Pedro Medellin, who heads a government study on the peyote population in the Huichol sacred areas.

Medellin says the Huichol community of 40,000 is one of the most important indigenous groups in Mexico.

"I do believe there will be several problems with conserving peyote if we don't act," Medellin says.

For now though, tomato farmers, drug harvesters and drug tourists are encroaching on the area.

To get to the desert where the peyote is found, you need to find a guide with a truck who can take you down into the scrub land below Real de Catorce. A guide, Jorge, who asked that his last name not be used because it is illegal to harvest peyote, shows a patch of the cactus under a small bush.

He points out the small, round, puffy-looking disc that is divided into segments. The peyote is partially buried under the ground.

Even though Jorge lives off the peyote trade, he says he has noticed that it is becoming harder and harder to find.

"Peyote is running out," he says. "People come here and don't know how to harvest it. And there are people who traffic it, too. There used to be so much peyote ... but the plant is dying out here now."

Jorge says he tries to make sure that when people dig up peyote to consume, they leave the root so it can regrow. But it takes 10 years to 15 years for peyote to regenerate.

"If the peyote dies out here, so does our livelihood," he says.

At the local beer and gas station in the dusty, nearby town of Estacion 14, owner Serio Delgadillo pours fuel into a jug for a waiting client.

He doesn't like the "peyoteros," as the drug tourists are called.

"People come here for the peyote; that's the only reason. They come and they eat it. They come from all over the world. Russians, Chinese, Japanese, everything," Delgadillo says.

He, too, is worried about what is happening to the supply, as he uses it in small quantities for its medicinal qualities.

"Before, there was peyote everywhere. There was a lot. Now there is so little," Delgadillo says. "At the pace we are going, they are going to finish it off."

Peyote's hallucinogenic properties come from the compound mescalin. To start seeing visions, you have to eat at least three of the incredibly bitter cacti. Trips last for hours, depending on how much you consume. Typically, drug tourists come down to camp in the desert for days on end.

Unlike the peyote, they are not hard to find.

Sitting on the train tracks are three young Mexican high school students from the city of Monterrey. They have been taking peyote for the past three days, chewing it, making tea out of it, roasting it.

None want their last names used.

Fernando talks about how he has become obsessed with a painting on the wall of the room he is staying in.

Though they say it was worth it, it took them days to find the cactus.

One of them, Manolo, has a badly sunburned face. He says he was almost bitten by a rattlesnake and that the blisters on his feet swelled after his days-long search.

"To find it is really hard. The peyote is supposed to talk to you. We went to one part of the desert and we walked for six hours, and we found nothing, nothing. It wasn't agreeable at all, all that walking," he says.

Laurent is from Geneva, and he went hunting for peyote with the Mexicans. He says this was always something he wanted to do.

"I like to use this plant to, like, open my mind to the nature. ... The best way to use it is to go alone and to walk and to see the nature," Laurent says. "We eat it, and I went to the desert, and I walked hours and hours and hours, and I lost myself, and it was really incredible. You can feel the place in another way."

He says he will tell his friends that it is something worth doing.

Back in Real de Catorce, Andres Carrillo, a shaman or "maracame" artist, uses string and beads to depict the visions given to him by the peyote. He says it taught him everything he knows.

Carillo doesn't read or write. He only recently learned Spanish. It is the peyote, he says, that bestows the most important knowledge.

"How will our young people learn if the peyote ends?" he says. "This is how we learn and how we are taught."