Former Pakistani Prime Minister Benazir Bhutto is staking her future on a power-sharing deal with a military ruler she hopes can help restore her family's name to center stage in the nation's political arena.

Bhutto — whose father, Zulfiqar Ali Bhutto, was hanged after being deposed as prime minister by a previous military regime — is urging President Gen. Pervez Musharraf to step down as head of the army and drop corruption charges against her so she can return from exile and contest parliamentary elections.

In return, the U.S.-allied Musharraf gets to stay on for another five years as a powerful civilian president.

But joining hands with the unpopular general could cost the liberal opposition leader support and turn her audacious bid to win a third term as prime minister into a political suicide.

"For the first time in the history of Pakistan, from one end to the other end of Pakistan, there's complete unanimity: No more dictatorship," Ghulam Mustafa Khar, a senior politician who has broken with Bhutto's Pakistan People's Party over her talks with Musharraf, told The Associated Press.

"Now, Benazir stands up and says, 'Stay, Musharraf, stay!' ... That is something which is a nightmare for the people of Pakistan," he said.

She and Musharraf also argue that joining forces will strengthen Pakistan's efforts to combat extremism and prevent the kind of political chaos that could prompt another burst of martial law.

"I am trying to convince (party colleagues) that the international community and the armed forces have confidence in Musharraf, and therefore we need to work out a solution" with him, she told The Washington Post recently.

But friends and foes warn that eight years of living abroad has left Bhutto out of touch with public sentiment.

Khar accused her of betraying her party's values by reaching out to a man who toppled Pakistan's last civilian government and has lost public support at home and abroad for recently trying to fire the country's top judge.

Khar was a close colleague of her father, who was hanged on murder charges in 1979 after his ouster in an earlier military coup.

By entering talks with Musharraf, Bhutto has offended the party's "long history of struggle against dictatorship," Khar said.

"This is one thing that I have not even visualized or dreamt," he said.

Bhutto was prime minister from 1988 to 1990 and from 1993 to '96. She was dismissed both times over allegations of corruption and mismanagement. In exile since 1999, she has led the Pakistan People's Party from London and Dubai.

Wary that Musharraf could revive the corruption cases she fled, Bhutto also wants him to drop charges against her and scores of other politicians, including Nawaz Sharif, another former premier and fierce rival plotting a comeback.

Sharif said Thursday he will return to Pakistan on Sept. 10 after seven years away. 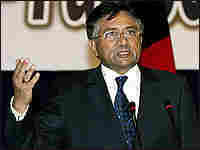 Who Will Replace Pervez Musharraf?

Pakistan's constitution requires the country's parliament and provincial assemblies to elect a replacement for President Pervez Musharraf within 30 days. In the meantime, the chairman of the upper house of parliament, Mohammedmian Soomro, has taken over as acting president.

There is speculation that the leaders of the two main parties in the ruling coalition, Asif Ali Zardari and Nawaz Sharif, may both be considering a bid for the presidency. Neither man has announced his intentions.

Both have said recently that they favored stripping away some of the powers that Musharraf garnered for the office during his nine-year rule, but a less-powerful presidency may also be less desirable to the political leaders.

Hours after Pervez Musharraf announced his resignation as Pakistan's president, Secretary of State Condoleezza Rice praised him as "one of the world's most committed partners in the war against terrorism." But the former general leaves office in disgrace with most of his own people, narrowly avoiding impeachment after nine years of often heavy-handed rule.

Musharraf now faces an uncertain future. Even when he had the protection of the presidency, the 65-year-old leader was the target of multiple assassination attempts by Islamic extremists. Now that he's out of power, he may be forced into exile for his own safety.

The resignation avoids a politically volatile impeachment on charges that Musharraf illegally suspended Pakistan's constitution and imposed emergency rule last November, firing dozens of judges who disagreed with him.

Some Pakistani officials feared an impeachment trial would produce embarrassing revelations about corruption in the government — and about connections between Pakistan's intelligence agencies and Islamist fighters in the country's tribal areas bordering Afghanistan.

Most of Musharraf's power derived from his control of Pakistan's army. As army chief of staff, he seized power in a 1999 coup, and he held on to his position as the country's top general until November 2007. He finally resigned his military post in the face of domestic and international pressure that painted him as a military strongman with no legitimacy as a civilian ruler.

Musharraf ultimately proved unable to control the resurgence of the Taliban and al-Qaida in northwest Pakistan. But he succeeded in convincing the Bush administration that he was the "indispensable man" – the only one who could do it.

Few leaders outside the United States have seen their destinies as intimately tied to the Sept. 11, 2001, attacks as Musharraf.

Two years before the attacks, Musharraf had seized power in a bloodless coup. He was largely viewed in the West as just another ambitious general who had muscled his way to the top in Pakistan, a nation that had seen more military rulers than civilian ones in its short history.

But Sept. 11 changed all of that. Suddenly, Musharraf was on the frontlines of America's war on terrorism, with President Bush frequently invoking his name as a key ally in the fight against the Taliban and al-Qaida.

This new role, however, put one of Musharraf's leadership challenges into sharp relief: namely, how to square growing demands from the country's Muslim fundamentalists with Pakistan's tradition of nominally secular government.

This balancing act has not been an easy one for a man whose skills were honed in the military rather than political arena.

A Military Man's Rise to Power

After graduating from the Pakistan Military Academy, the country's equivalent of West Point, Musharraf was commissioned in the elite Artillery Regiment in 1964 and saw action the next year against India in the second of three full-scale wars between the rival nations.

By 1971, when India and Pakistan would come to blows again, Musharraf was a company commander in the Special Service Group "Commandos."

In the coming years, he commanded both infantry and artillery divisions and filled various staff positions. As army chief of staff, Musharraf played the lead role in orchestrating a conflict with India in the rugged mountains of Kargil, Kashmir, in 1999. The handling of the conflict, which brought the two nations to the brink of a fourth all-out war, led to disagreement between the military and the government of Prime Minister Nawaz Sharif.

The tension between the government and powerful military prompted Sharif to dismiss Musharraf as army chief of staff in October 1999, while Musharraf was out of the country. On Musharraf's return to Pakistan, Sharif refused to allow his plane to land, forcing it into a holding pattern above Karachi airport. But a coup led by generals loyal to Musharraf toppled Sharif's government and allowed the plane to land.

Sharif and his predecessor as prime minister, Benazir Bhutto, were widely viewed as corrupt, and many Pakistanis initially believed Musharraf's power grab marked an opportunity to put the country on the path to stability.

Musharraf also seemed eager to shed the outward appearances of military rule, preferring to appear in public in a western-style suit rather than his medal-clad general's uniform.

Despite Musharraf's early efforts to downplay the authoritarian nature of his rule, it took the nation's Supreme Court, in a May 2000 ruling, to force a return to parliamentary elections. Even so, President Gen. Musharraf maintained a firm hand on the reins of government.

From Pariah to Ally

During the 1980s, Pakistan had been a key U.S. partner in efforts to drive Soviet forces out of Afghanistan. Islamabad was enlisted to funnel American-funded weapons and technical support to mujahedeen fighters, some of whom went on to form the Taliban and al-Qaida, in the fighters' battle to end Moscow's decade-long occupation.

As the Cold War drew to a close, however, Pakistan was increasingly seen as an economic basket case with little promise of political stability. The Musharraf-led coup reinforced the notion. Meanwhile, the economic clout of Pakistan's bitter rival, India, was increasingly on the radar screen of Washington policymakers.

But Islamabad's fortunes were revived by the attacks of Sept. 11, 2001, and almost overnight, Musharraf went from pariah to ally. Pakistan's cooperation was imperative for any U.S. intervention in Afghanistan, and Musharraf was quick to oblige.

An attack on the Indian parliament building in December 2001, which India blamed on Pakistani militants, brought relations with New Delhi to a new low. The attack was quickly condemned by Musharraf.

The whereabouts of Osama bin Laden also presented continuing headaches for Musharraf's government. Despite intelligence reports that the al-Qaida leader is being sheltered by locals in western Pakistan — a hotbed of Muslim extremism — Pakistan's army has been unable to find him.

Musharraf's alliance with the United States angered religious fundamentalists in Pakistan, some of whom wanted a Taliban-style Islamic government in Islamabad and viewed their president as a puppet of Washington.