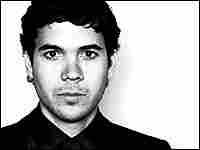 Matthew Dear is one of the most celebrated American producers of "microhouse," a minimalist and glitchy subgenre of dance-floor music. He's recorded under the aliases False, Jabberjaw and, most frequently, Audion. He also slaps his real name on records.

But even if Audion's records show his stripped-down experimental side and his own name indicates "Attention: Vocals May Be Contained Within," there isn't a huge variation in the music attached to Dear's various sobriquets. Ultimately, it's all top-notch electronica.

Those divisions could become more defined, however, with his latest album as Matthew Dear, Asa Breed. While 2004's Backstroke included vocals, it still veered into the realm of minimalist disco. But Asa Breed is Dear's most song-oriented album to date, and "Deserter" stands as its most pop-friendly tune.

"Deserter" sounds like a gem plucked from an obscure compilation of British or German synth-pop from the early '80s. Four bass notes plot the song's course as a robotic drum machine clip-clops out a rigid pattern, over which Dear deadpans lyrics such as "You sound deserted / Lost and alone / The world around you has gone perverted."