Accessibility links
'Outsider' Image Worked Before for Thompson In 1994, Fred Thompson, a longtime lobbyist, exchanged his business suits for a plaid shirt and a red pickup truck. His new, folksy "outsider" image won over Tennessee voters and gained him a U.S. Senate seat in his first political campaign. 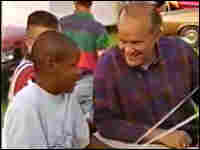 Fred Thompson projected a down-home image in this television ad from his 1994 Senate campaign. Thompson went on to win the race with 60 percent of the vote. YouTube hide caption 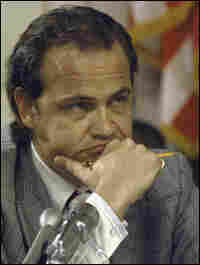 Fred Thompson was the chief Republican counsel for the Senate Watergate hearings, and later was a lobbyist. But he ran successfully as a Washington outsider in 1994. Steve Northup/Time Life Pictures/Getty Images hide caption

Read about Fred Thompson’s political career and his prospects as a presidential candidate:

On Wednesday, actor and former senator Fred Thompson plans to announce he is running for president.

While he's been testing the waters, Thompson has enjoyed a lot of attention and high poll numbers. But he wasn't so lucky at the start of his first campaign.

In 1994, Thompson decided to run for the Tennessee U.S. Senate seat vacated by Al Gore when he was elected vice president. He hit the campaign trail armed with a decade of film celebrity, a career as a Washington lobbyist and renown for his work as a Republican attorney during the Watergate scandal.

But his first steps were wobbly, according to his friend and former campaign adviser Lewis Donelson.

"His main problem in the beginning was that he was totally disorganized," Donelson says. "He found that the business of putting together a campaign organization wasn't his cup of tea."

His Democratic opponent, a well-known congressman named Jim Cooper, appeared to have the edge in fundraising, polls and organization. Although Thompson had campaign experience, having worked for Tennessee Republicans such as Howard Baker, he appeared uneasy to his opponents.

"I didn't see any charisma in Fred for the longest time," says Mike Kopp, a Democratic strategist and former spokesman for Cooper.

And Thompson's message at the time wasn't centered on the hot-button family-values issues that came to define Republican politicians at the time.

Dressing Down for a New Image

Thompson went through two campaign managers before settling on Bill Lacy. Today, Lacy is the manager of Thompson's testing-the-waters committee, Friends of Fred Thompson. Lacy says that in 1994, Thompson was uncomfortable with his stiff campaign approach and wanted to loosen things up.

"So he came to me one day and suggested that we should go out and look at getting a truck and that maybe he could campaign out of the truck dressed down a bit," Lacy says.

"I did what I think any Washington-based consultant would do," Lacy adds, "which is to say, 'I don't think I really care for that all that much.'"

But Lacy did agree to the plan that he says Thompson hatched in a Cracker Barrel restaurant with Tom Ingram, a friend and Republican strategist. The idea was for Thompson to get a red pickup and barnstorm the state. After years of suiting up to play government insiders, Thompson would be suiting down for the role of Washington outsider.

An Opponent on the Defensive

When Thompson started appearing in TV ads and at events in flannel shirts and jeans instead of suits and leather loafers, his opponents were skeptical. Mike Kopp says he thought Thompson seemed to be using a different speaking voice.

"Our sense was, 'He's just playing a role.' And people were going to look at that and see right through it," Kopp says. "In fact, we were wrong."

Kopp says Thompson's new approach put his candidate, a sitting congressman and son of a former governor, on the defensive. In public debates, Cooper was now in the unreal position of defending himself as an insider against a Washington lobbyist. And Bill Lacy says Cooper was so distracted by Thompson's image that he failed to counter the Republican's message.

Thompson's call for government reform began to resonate with voters, and his poll numbers jumped.

He won the race with 60 percent of the vote, and his victory was seen as part of the Republican Revolution of 1994. That fall, Democrats lost control of both the House and the Senate in a tidal wave of voter discontent. Thompson took his red pickup to his swearing-in on Capitol Hill.