Accessibility links
For Okkervil River, a Pop Slant on Thorny Issues Okkervil River's The Stage Names is a critically lauded album that touches on themes of a short story. But lead singer and songwriter Will Sheff says the goal is pure listening pleasure.

Listen
For Okkervil River, a Pop Slant on Thorny Issues 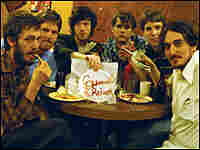 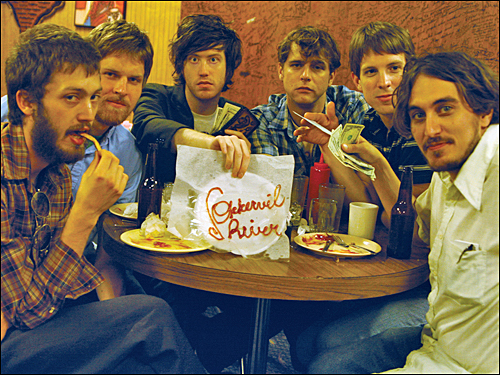 Okkervil River formed in Austin, Texas, in the late 1990s. Singer-songwriter Will Sheff is pictured third from left.

From 'The Stage Names'

Watch a video of the lead single from The Stage Names:

Any band that names itself after a short story by Leo Tolstoy's great-grand-niece is bound to transcend the conventional.

"Okkervil River," by Tatyana Tolstaya, follows the plight of a middle-aged bureaucrat and his obsession with an obscure singer. When the vocalist turns out to be a timeworn shell of her former self, the story becomes a meditation on how art stands apart from those who create it.

Okkervil River, an Austin-based band, is led by singer and songwriter Will Sheff. He writes lyrics that read like short stories, complete with dialogue and parenthetical phrases, and he says that returning to the themes of the story was a goal of the group's critically praised new record, The Stage Names. Sheff recently discussed it with All Things Considered's Debbie Elliott.

"There's a prejudice these days where people think that in order to be serious, you have to be all dark and brooding and heavy, and I was thinking, 'That's not true; you can be serious and be playful and fun,'" Sheff says. "And joy is as much of an important emotion as pain and sorrow, and far more desirable."

So Sheff, the band and producer Brian Beattie sat down to listen to some of their favorite "smart but fun, unpretentious pop music": girl groups, Motown records, David Bowie, The Rolling Stones and so forth. They found that the best of it was filled with exciting, interesting arrangements and overdubs — sounds the group tries to emulate on The Stage Names.

"The whole idea of this record, sonically, was to give the listener a kind of listening pleasure," Sheff says. "To give them little, fun, ear-candy things that they enjoyed, and little thrilling moments that were interesting to them ... The thing that Brian and I kept saying was the idea of the record being like a gift, that we wanted to be generous to the listener."

Indeed, on a song like "Plus Ones," Sheff waxes coyly, playing off songs with numbers in their titles — like "96 Tears" by ? and the Mysterians, or Paul Simon's "50 Ways to Leave Your Lover."

"I was up at night, I couldn't sleep, and I had this idea: 'No one wants to hear about your 97th tear,'" Sheff says. "And that just seemed so stupid to me that I started laughing... and then I was like, 'Can I turn this into a song?'"

But beneath the surface, ringing with echoes of pop anthems gone by, lie more searching, ruminative lyrics. The seriousness of Sheff's songwriting hasn't changed, even if its sound has.

"It's sort of like the really dark parts, we'll just pull a little curtain in front of it," Sheff says. "You don't have to see that, we know it's there, it's fine, but look! There's this nice, pretty, glittery curtain."

Take the song "Savannah Smiles," which takes as its subject the story of Shannon Wilsey, better known as adult-film star Savannah, who committed suicide after a car accident hindered her acting ability. Sheff turns the song partially into a rumination on the power of being a fan, much like the tale from which Okkervil River takes its name.

"Your fandom for some simple pop song can begin to bleed into sexuality and spirituality and become this really overpowering thing," he says.

At the same time, Sheff takes an empathetic bent, writing from the perspective of Wilsey's father reading her daughter's diary. He seeks to portray the ambiguity behind the causes of her death.

"I just really like the idea of, well, that you can't just go, 'Oh, this is why this happened, that this is my really glib explanation for why something really horrible happened, case closed,'" Sheff says. "So I wanted to write a sympathetic song that didn't say anything — it was just describing one moment, one almost split-second moment."

Sheff takes the same approach to another song on The Stage Names called "John Allyn Smith Sails." John Allyn Smith was better known as John Berryman, a poet who committed suicide by jumping off a Minneapolis bridge in 1972. Sheff visited the site, and was inspired to memorialize the author.

"I wanted to give that character, that's my imaginative re-creation of John Berryman to the best of my ability, have the chance to explain his actions," Sheff says. "And write a song about that that's not only not condemning, but that looks at death as a kind of mystical thing, something that's special. Which is not necessarily how I feel, but I just wanted to do that. It felt frightening to me, and so for that reason I was drawn to it."

Throughout the album also runs a rumination on the artist himself, again drawing on Tolstaya's story. "Title Track" explores the choice of artists to invent stage personalities, and to maintain them through frequent performing. It's an issue which resonates with Sheff himself.

"My No. 1 goal is to always be able to do something that I think is thrilling and exciting, and I know it's a teenage thing to say, but things like health and stability and security — they often do stand in the way of that," Sheff says. "So every now and then, anybody becomes aware that there's a choice you have to make: to get out and be a normal happy person, or stay in and follow the light from that window. I'd say everything is secondary to that for me, but that freaks me out. It's scary."