Accessibility links
Japan Wrestles with Kyoto Accord Promises The Japanese government says it will meet its Kyoto target, but a steady rise in commercial construction, transportation use and lifestyle changes are steering the rate of carbon emissions in the wrong direction. 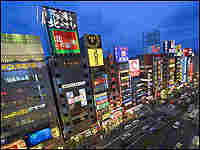 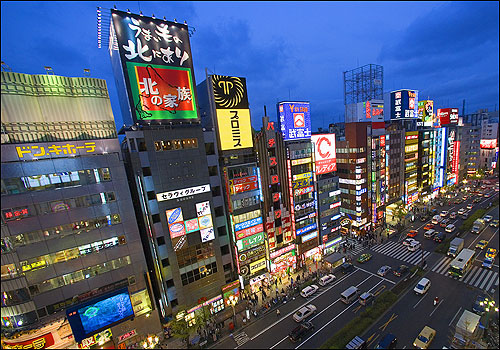 But its impact has been less than many hoped; why are countries like Japan having such a tough time adhering to their commitments?

Read about the stumbling blocks the Kyoto agreement has faced, as well as its successes. 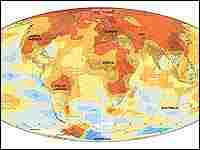 Click through this map from National Geographic to see how climate change is affecting the planet.

Japan makes you think of sushi and anime. Or if you're a policy wonk, The Kyoto Protocol — the treaty agreed to in Japan's old and beautiful capital a decade ago, where countries around the world pledged to reduce their greenhouse gas emissions.

Japan promised to take a leading role, but it's having trouble.

Ryutaro Yatsu is with Japan's Environment Ministry, and he says Japan will be able to meet its Kyoto target.

But on paper, the numbers don't look so good. And if you keep asking, you sometimes get a more qualified answer.

"Well, we are trying our best to achieve our target," says Euriko Koike, the former environment minister who is now minister of defense. "For the time being, it seems to be a bit difficult."

Japan's emissions have increased since it signed the Kyoto treaty.

"According to the latest in 2005, total greenhouse gases are a 7.8 percent increase compared to the baseline year of 1990," Yatsu says, going over the latest numbers on Japan's progress.

And according to the Kyoto commitment, the target is 6 percent below the baseline figures from 1990. So instead of cutting emissions by 6 percent, they have grown about 8 percent. That adds up to a 14 percent problem.

A History of Strong Commitment

You might think that if any country could meet its Kyoto target, it would be Japan.

The country has a strong tradition of conservation, and Japanese culture places a high value on keeping promises. So it would be politically awkward for the country not to meet the targets it agreed to on its own soil.

What has gone awry?

Yatsu takes out some charts that show some good news. Take big industry — steel, cement and auto manufacturers: As a whole, the industrial sector has actually reduced its emissions 3 percent since 1990.

But emissions from the commercial sector, things like new office buildings, are up 44 percent.

"It's very difficult for us because there are so many, many buildings now constructed throughout Japan," Yatsu explains.

Japan had pretty low emissions per capita when it signed Kyoto. People tend to live in small houses (there's not a lot of land) and drive small cars. But now emissions from cars and transportation are up by 18 percent; home emissions are up 37 percent.

A Work in Progress

There are limits to what the government can do about that, but it has launched an advertising campaign called "Team Minus 6%" The title itself assumes an understanding of the Kyoto protocol.

This advertisement features a conversation between a microwave oven and a rice cooker. The message: Unplug appliances when you're not using them.

The campaign also urges people to use their own bags at the supermarket instead of asking for plastic ones.

Lida directs the Institute for Sustainable Energy Policies in Tokyo. He says the government's campaign reminds him of one from World War II.

"During World War II, Japanese people were obliged to prepare for the U.S. Army with bamboo swords," Lida says.

He says Japan needs to get serious about tough topics like energy policy and invest in ways to generate electricity without generating carbon dioxide.

Right now, the budget for renewable energy is small, he says.

Japan gets about one-third of its power from nuclear reactors, which don't produce greenhouse gases. The government would like to build more, but it's a hard sell here; people are uneasy about it.

Lida says that if Japan really wants to meet its Kyoto target, it will have to buy credits from other countries that have cut their emissions. But he calculates that the cost to offset Japan's 8 percent growth in emissions for the five years covered by the Kyoto protocol will be around $8 billion.

There is a sense in some corners that the Kyoto accord has been unfair to Japan. You hear this from people in business suits — and a guy who wears skin-tight shorts to work.

Nobuhiko Takada is a famous martial-arts fighter. He competes in sometimes violent, extreme-fighting events. Takada is also part of the government's "Team Minus 6%" public-relations campaign to get people to be more carbon conscious.

"It's like I'm sweeping in front of my house, but someone is dropping trash from the sky," Takada says. "Developing countries are emitting huge amounts of CO2, like India, China, the United States and Canada."

Takada is built like a superhero, but there are limits to what even he can do.

He has a kind of signature battle cry he does for fights, but he also offers one for climate change: "Men of the world who are serious about climate change. Come on!"