Accessibility links
How a Duck Species Was Snatched Away to Safety Three years ago, biologists snatched 20 endangered Laysan Ducks — out of just 500 in existence — from the only spot they were found on earth. The birds became pioneers for a new population of ducks on Midway Atoll, where today, they thrive.

How a Duck Species Was Snatched Away to Safety

How a Duck Species Was Snatched Away to Safety 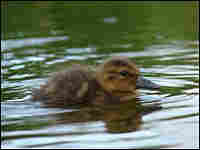 A fledgling Laysan Duck on Midway Island. Hens surprised scientists by laying multiple clutches on their new island home; back on Laysan, they only did so once a year. The number of fledglings on Midway has grown to more than 100. Courtesy of Jimmy Breeden hide caption

Three years ago, biologists dressed all in black crept around the wetlands of a small desert island in the middle of the night. Their goal: to capture 20 Laysan Ducks.

Those snatched ducks became pioneers in an effort to help preserve an extremely endangered species. The entire population consisted of about 500 birds, found only on Laysan, a remote Northwestern Hawaiian island in the Pacific Ocean. A bad storm could have wiped them out.

The birds were relocated to Midway Atoll, and today, they are thriving, says John Klavitter, chief biologist for the Midway National Wildlife Refuge.

"It's amazing," Klavitter says. "It's sort of rare to have this kind of success with an endangered species in this time period."

Surprising biologists, the ducks bred in their first year on Midway. Some hens now have multiple clutches a year. On Laysan, they lay eggs only once a year.

The number of fledglings on Midway each year has grown from 12 to 60 to more than 100. And the total population is up to almost 200, Klavitter says.

"If something were to happen to that main population on Laysan, here we have a safety-net population to keep that species going," he says.

Laysan measures less than two square miles. Before scientists brought the ducks to Midway, they had less range than any other duck on earth.

Scientists believe the ducks used to live on most Hawaiian Islands, but rats probably killed most of them. Laysan was rat-free, so the species did better there.

In the early 1900s, people brought rabbits to Laysan, and the rabbits ate the vegetation that the ducks needed for foraging and nesting. At one point, the ducks numbered less than a dozen.

Klavitter says saving endangered species is important because biodiversity is essential to the health of the planet.

"You could think about all the species on the planet like rivets on an airplane. If you lose a few rivets, the plane will probably still fly. But if you lose too many rivets, or too many species, that plane, or that world, might change significantly."