Accessibility links
Teams Focus on Poppy Eradication in Afghanistan The cultivation of opium poppies in Afghanistan is at an all-time high. The United Nations says the country is expected to produce nearly 9,000 tons of opium this year — nearly all of the world's supply. But some anti-drug teams have been successful in reducing the amount planted. 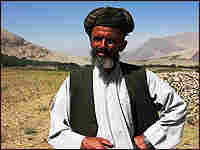 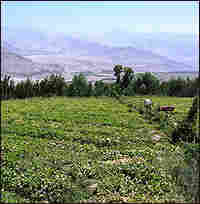 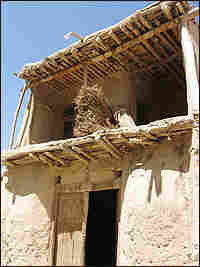 The cultivation of opium poppies in Afghanistan is at an all-time high. The United Nations says the country is expected to produce nearly 9,000 tons of opium this year — nearly all of the world's supply.

Officials say the multibillion-dollar trade is spurred by the Taliban and by corrupt members of the Afghan government. But U.S. officials insist they can win this war — especially with the help of provincial governors like the one in Badakhshan, a province where opium cultivation has plummeted.

Planting season starts next month. And as Friday prayers wind down on a recent afternoon in one town, a U.S.-funded poppy-elimination team pressures farmers not to plant opium poppies.

Farmers in Jurm pour out of the mosque and walk to the police compound to meet with the anti-drug team.

"Don't grow poppy and you'll get development projects like roads," says Mohammed Akbar, a member of the task force. "Besides, when you grow poppy, you don't have room for other crops like wheat and grain. That drives up the cost of feeding your families and livestock. Then, when we destroy your poppies, how will you pay your landlords?"

It's a tough sell. Especially when the farmers say they've seen little in the way of development projects year after year. They complain that even the small hydroelectric plant being built nearby will light only one light bulb per household here.

One of the farmers is Qari Hafizullah. The poppy elimination teams cleared his fields this spring. But he says neither that nor the anti-drug team's pitch will keep him from planting poppies again in a few weeks.

"I can't do much with wheat, except make bread," he says. "I wouldn't make enough money to do anything else."

The farmers' resistance to abandoning opium poppies is common across the province of Badakhshan. Opium has been a staple of trade here for centuries. In fact, Jurm's neighboring district of Khash — located on the ancient Silk Road to China — is the source of the Afghan word for opium poppy. Just 50 years ago, cultivation was legal here.

Another obstacle to the opium war in Badakhshan is the fact the West has given authorities only 10 tractors with which to eradicate nearly 5,000 acres of poppies. Many of the fields are in highlands that the tractors can't reach.

Still, Badakhshan is emerging as one of the few success stories. Cultivation here is down by 75 percent. U.S. officials say most of the credit goes to Governor Abdul Majid.

A respected elder with a gray beard, the governor is an agricultural expert who has made poppy elimination a top priority.

Majid says the drop is because he, like the U.S.-funded team that works with him, travels from district to district to convey the anti-opium message in person. He remains the only Afghan governor to eradicate poppies at the "cabbage" stage, when they appear as little more than green fuzz in the fields.

He says that gives the farmers time to plant something else.

"The reason I'm successful is because I've gained people's trust," Majid says. "It certainly isn't because of an effective police force or the central government's efforts."

Thomas Schweich, the acting U.S. assistant secretary for the Bureau of International Narcotics and Law Enforcement Affairs, says that under a recently revised strategy against opium, the United States plans to bolster local Afghan officials like Abdul Majid with millions of dollars.

"You have a governor who really did a very good job in eliminating poppy — over 75 percent reduction, I think, over the past 12 months," Schweich says. "So, it's our job in the international community to reward a province like that with that kind of assistance — so that there can be sustained reductions. And that's what we are going to be encouraging the international community to do."

But Majid and others here in Badakhshan fear the new U.S. strategy could backfire. For one, the new policy demands that provinces be 100 percent poppy free. Afghan officials say even a popular governor like Abdul Majid cannot control every part of Badakhshan. There may not be any Taliban here, but most villages are isolated by high mountains and the lack of roads or phone service.