Accessibility links
Michelle Rhee: 'You Can Change People's Hope' The new chancellor of the Washington, D.C., public school system was hand-picked by the mayor to turn the city's struggling school system around. Rhee talks about her work with disadvantaged youths and how she balances her career with motherhood. 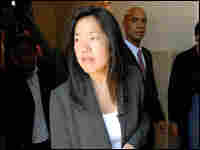 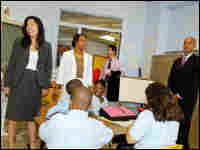 Around the country, most children are heading back to school. And along with the new shoes and new lunchboxes come old debates. Nationwide, struggling school systems have officials and parents wondering why failing schools seem so hard to fix, and why an often vast achievement gap persists between white and Asian children and other minorities.

Michelle Rhee, Washington, D.C.'s new chancellor of the public school system, is tackling these questions and taking action. Rhee is the city's first school chief to operate within Mayor Adrian Fenty's overhaul of education in the District. Fenty was recently successful at his plan to take over Washington's embattled schools.

A double-Ivy League graduate, Rhee has no prior experience running a school system. Also, as a Korean-American, her appointment is criticized by some who question her ability to lead a majority-black public school system. Supporters point to Rhee's past work with Teach for America, a program that places young teachers in under-resourced urban and rural public schools.

Cognizant of the naysayers, the mother of two knows one thing for sure.

"For far too long, we have failed to deliver the quality of education that our students deserve," Rhee says.