Accessibility links
A Re-Fab for Prefab Sprout's 'Steve McQueen' In 1985, the British rock quartet Prefab Sprout released its second album Steve McQueen. Influenced as much by Tin Pan Alley as new wave, the record was both hailed and panned by British and American critics alike. Twenty-two years later, age — and a deluxe re-release — has served it well. 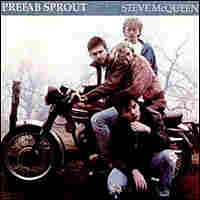 'Steve McQueen,' Then and Now

Songs from the original release of Steve McQueen:

From NPR Archives: In 1988, Prefab Sprout released its third full-length, the follow-up to Steve McQueen. Andy Lyman reported on the band's record From Langley Park to Memphis and talked to lead singer Paddy McAloon:

Back in the summer of 1985, I was a DJ at an alternative rock station in the Baltimore-Washington, D.C. metropolitan area. I remember rummaging through the new-release bin one night until I spotted this cool-looking album cover. It was a guy sitting on a Triumph motorcycle with a willowy blonde draped across his back, two more blokes posed around them, and scraggly bare tree branches poking through a foggy background.

That song, "Goodbye Lucille #1," was my song. I was going through a painful breakup of a long relationship, and when Paddy McAloon sang, "Why don't you join the Foreign Legion / You're still in love with Hayley Mills," it was all the tough love I needed. The rest of Prefab Sprout's sophomore album Steve McQueen was just as heartbreakingly bittersweet and close to home.

Lead singer Paddy McAloon wrote each of the album's songs. He's just as good as Elvis Costello, but with some Gershwin, Cole Porter and Hoagy Carmichael thrown into the mix. There's an old-school literacy and urbanity, a dreaminess, to his songs of love, guilt, Eros and heartbreak; it rings of the '40s more than the '80s. And he did it all in Newcastle, in the north of England, far from the center of New Wave in London.

The reissued edition of Prefab Sprout's Steve McQueen includes unplugged versions of eight of the originally released tunes, recorded in 2006. They're nothing less than a revelation. With just a harmonica, three acoustic guitars, bits of atmospheric percussion, Wendy Smith's angelically ethereal harmonies and McAloon's bruised-soul boyish croon, the lyrics gained a level of emotional and intellectual sophistication that transcended all that came before. When I heard Paddy and Wendy harmonize the plaintive refrain of "Appetite" ("So if you take, then put back good / If you steal, then be Robin Hood"), it was the first time I fully comprehended how deep the song really is.

Twenty-two years after its initial release, this deluxe reissue of Prefab Sprout's Steve McQueen — the original Thomas Dolby productions and the new acoustic reinterpretations — never fails to surprise me, soothe me, intoxicate me and lift me.