Accessibility links
Why Women Read More Than Men Recent studies confirm what publishing executives have long suspected: Women read more than men. It's not clear why but theories abound, ranging from early childhood development to the differences between the male and female brain. 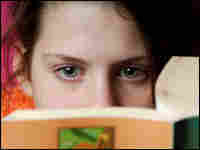 You Must Read This: NPR talks with authors about their favorite "buttonhole" books — the ones they urge passionately on friends, colleagues and passersby.

A couple of years ago, British author Ian McEwan conducted an admittedly unscientific experiment. He and his son waded into the lunch-time crowds at a London park and began handing out free books. Within a few minutes, they had given away 30 novels.

Nearly all of the takers were women, who were "eager and grateful" for the freebies while the men "frowned in suspicion, or distaste." The inevitable conclusion, wrote McEwan in The Guardian newspaper: "When women stop reading, the novel will be dead."

McEwan's prognosis is surely hyperbole, but only slightly. Surveys consistently find that women read more books than men, especially fiction. Explanations abound, from the biological differences between the male and female brains, to the way that boys and girls are introduced to reading at a young age.

One thing is certain: Americans—of either gender—are reading fewer books today than in the past. A poll released last month by The Associated Press and Ipsos, a market-research firm, found that the typical American read only four books last year, and one in four adults read no books at all.

A National Endowment for the Arts report found that only 57 percent of Americans had read a book in 2002 a four percentage-point drop in a decade. Book sales have been flat in recent years and are expected to stay that way for the foreseeable future.

Among avid readers surveyed by the AP, the typical woman read nine books in a year, compared with only five for men. Women read more than men in all categories except for history and biography.

When it comes to fiction, the gender gap is at its widest. Men account for only 20 percent of the fiction market, according to surveys conducted in the U.S., Canada and Britain.

By this measure, "chick-lit" would have to include Hemingway and nearly every other novel, observes Lakshmi Chaudhry in the magazine In These Times. "Unlike the gods of the literary establishment who remain predominately male—both as writers and critics—their humble readers are overwhelmingly female."

Book groups consist almost entirely of women, and the spate of new literary blogs are also populated mainly by women. The Associated Press study stirred a small buzz among some of those bloggers.

"I've read at least 100 books in the past year. Seriously. Probably more like 150 to 200," a user named Phyllis wrote on the literary blog Trashionista. "My husband? I'm guessing zero, unless you count picture books and comic books he has read to the kids."

"We see it every time in our store," says Carla Cohen, owner of the Politics & Prose bookstore in Washington, D.C. "Women head straight for the fiction section and men head for nonfiction."

"I know that we certainly have more women than men customers," concurs Mitchell Kaplan, owner of Books & Books, an independent bookstore in the Miami area. "But I don't have any wisdom about why that is."

Kaplan speculates that women may be buying books for men, but he concedes that could be simply wishful thinking.

It's All in Your Head

Theories attempting to explain the "fiction gap" abound. Cognitive psychologists have found that women are more empathetic than men, and possess a greater emotional range—traits that make fiction more appealing to them.

Some experts see the genesis of the "fiction gap" in early childhood. At a young age, girls can sit still for much longer periods of time than boys, says Louann Brizendine, author of The Female Brain.

"Girls have an easier time with reading or written work, and it's not a stretch to extrapolate [that] to adult life," Brizendine says. Indeed, adult women talk more in social settings and use more words than men, she says.

Another theory focuses on "mirror neurons." Located behind the eyebrows, these neurons are activated both when we initiate actions and when we watch those same actions in others. Mirror neurons explain why we recoil when seeing others in pain, or salivate when we see other people eating a gourmet meal. Neuroscientists believe that mirror neurons hold the biological key to empathy.

The research is still in its early stages, but some studies have found that women have more sensitive mirror neurons than men. That might explain why women are drawn to works of fiction, which by definition require the reader to empathize with characters.

"Reading requires incredible patience, and the ability to 'feel into' the characters. That is something women are both more interested in and also better at than men," says Brizendine.

There are exceptions to the fiction gap. More boys than girls have read The Harry Potter series, according to its U.S. publisher, Scholastic. What's more, Harry Potter made more of an impact on boys' reading habits. Sixty-one percent agreed with the statement "I didn't read books for fun before reading Harry Potter," compared with 41 percent of girls.

For publishers and booksellers, that offers a ray of hope—not only that the fiction gap might not be so insurmountable after all, but also that another, more worrisome gap might also be closing: the age gap. Young people, in general, read less than older people, and that does not bode well for books and the people who love them.

"What all of us are wondering is what will happen with this new generation that doesn't read much," says bookstore owner Carla Cohen. "What happens when they grow up?"