Accessibility links
Adventurer Steve Fossett No Stranger to Tall Odds Steve Fossett, whose plane went missing in Nevada, has called himself an adventure sportsman. His many feats in the air and on land include climbing mountains, racing dog sleds, and trying for world records in sailing. But his most notable adventures were in the air. 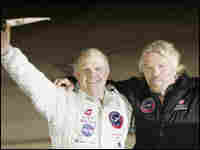 Steve Fossett, left, and Sir Richard Branson wave to reporters after Fossett made an unscheduled landing due to electrical problems with the Virgin Atlantic GlobalFlyer on February 11, 2006. David Dyson-Pool/Getty Images hide caption 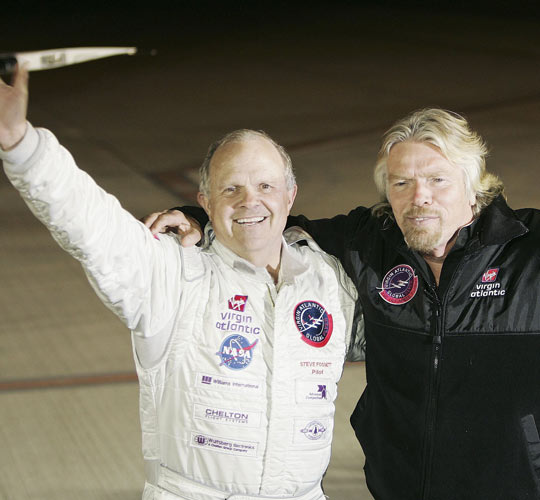 Steve Fossett, left, and Sir Richard Branson wave to reporters after Fossett made an unscheduled landing due to electrical problems with the Virgin Atlantic GlobalFlyer on February 11, 2006.

Steve Fossett once claimed that he wasn't really all that special.

"I'm not super anything. Maybe that's why people are personally interested in me, because I'm really pretty close to normal," he said.

Maybe, if your definition of normal means being willing to throw yourself to the mercy of the winds. In 2002, Fossett went whizzing around the world in a tiny bright yellow capsule tethered to a balloon. He spent two weeks riding the winds - sometimes just a few hundred feet above the ocean, sometimes at 200 miles per hour - for around 20,000 miles.

As he neared the finish line, just south of Australia. Fossett spoke to his supporters by satellite phone.

"It's a clear night down below," he announced over the static. "It's enormous relief, [having put] … everything into this."

Fossett had failed five times before. Once, in a nasty thunderstorm, he plummeted more than 5 miles down, into the Coral Sea north of Australia. But long before that incident, Fossett said he was used to things going wrong.

"I enjoy what I'm doing and am willing to take both the good and bad that comes with it," he said.

In 2005, Fossett flew a small airplane called the Virgin GlobalFlyer around the world. He did it alone, without refueling or stopping.

Landing in Kansas to a cheering crowd, he said he was a "lucky guy" to be able to follow his dream.

Fossett's exploits put him in the grand tradition of historic adventurers, said Bob van der Linden, s a curator at the Smithsonian National Air and Space Museum, which houses Fossett's balloon capsule and the Global Flyer.

What's different about Fossett, van der Linden said, is that he is always trying something new.

"You name it, he's attempted to set a record in it, he's even driven dog sleds," he said. "If he had been doing this in the 1930's, schoolchildren would know his name."

Fossett also swam the English Channel and climbed some of the world's highest mountains, but his first career was in financial trading. He reportedly earned millions. That seems to have set him free to do what he loved - to become, as he once put it, an "adventure sportsman."

Just a week ago, van der Linden said, he got a call from Fossett: the sportsman wanted to get back some of the equipment he had given to the museum. He said wasn't done with it yet.