Accessibility links
Concealed Weapon: Eels' Second Set of Teeth California researchers have discovered that moray eels have a second set of jaws in the back of their throats with razor-sharp teeth that help them catch their prey. The findings are published in the latest issue of the science journal, Nature. 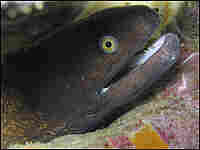 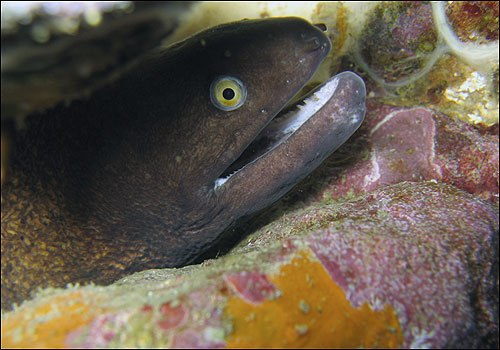 Researchers say Moray eels have a second set of long, curved, canine-like teeth used for pulling prey down their throats.

See the Eels in Action

As the Moray eel feeds, a second set of jaws emerges from the throat to help the eel swallow its prey. This video allowed researchers to identify the eel's unique feeding style. Credit: Rita Mehta. 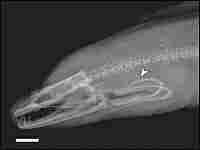 These radiographs from Nature depict the position of the pharyngeal jaws in Moray eels during prey transport. Rita Mehta/Candi Stafford hide caption 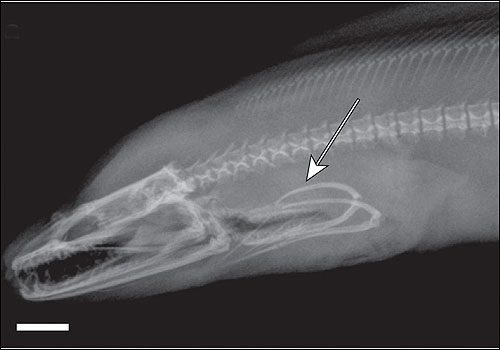 These radiographs from Nature depict the position of the pharyngeal jaws in Moray eels during prey transport.

From the Depths of the Sea, to Waterfall Rocks, see an eel-like fish coveted for its taste in some parts of the world.

Scientists in California have reported that moray eels have a set of teeth within a second set of jaws, called the pharyngeal jaws, that help them capture their prey.

Once the moray eel secures its prey with its first set of jaws, the pharyngeal jaws reach up from its throat, grabbing and pulling the prey down through its esophagus.

Rita Mehta is a post-doctoral researcher at the University of California Davis who studies the evolution of diversity in eel feeding behavior.

Mehta used a slow-motion video camera to record a moray feeding, and she saw the pharyngeal jaws peek forward.

When Mehta examined the moray's jaws, she was surprised by their range of motion.

Mark Westneat is curator of zoology at the Field Museum in Chicago. He also studies fish feeding behaviors and he says it's common for fish to have a pharyngeal jaw when they lack teeth used for grinding food.

"Having a jaw in your throat that has long, recurved, canine teeth — and can actually shoot out of your throat into your mouth, grab a fish or something, and pull it down the throat — is highly unusual," he says.

But which set of teeth should be feared the most?

"Oh, man, that's tough, the front ones are really long and sharp, too," Mehta says. "I'd be afraid of both."

Mehta reports her findings in Thursday's issue of the journal Nature.

Moray eel facts, photos, and lyrics to "That's a Moray!"