Accessibility links
A Spare Meditation on Love, Need and (Maybe) God "You Can't Fail Me Now" began life on Loudon Wainwright III's new album, but co-writer and producer Joe Henry reworks it on his own new album. Formerly a slow, hookless strings-and-guitar ballad, it's now more sparse, more morose and even lovelier.

A Spare Meditation on Love, Need and (Maybe) God

A Spare Meditation on Love, Need and (Maybe) God 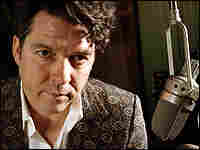 Joe Henry has resuscitated careers as a producer, but he does well on his own, too. Melanie Nissen hide caption

Joe Henry's "You Can't Fail Me Now" began life on Strange Weirdos, Loudon Wainwright's soundtrack to Knocked Up. The track was produced and co-written by Joe Henry, a pairing that seems like a natural fit: Henry is an estimable singer-songwriter with a side gig resuscitating the careers of unjustly ignored cult acts; Wainwright, as it happens, is an estimable singer-songwriter and unjustly ignored cult act.

In both theme and tone, "You Can't Fail Me Now," a spare meditation on love and need and (maybe) God, makes a lot of sense as a Joe Henry song. Consequently, it's no surprise to see it reappear, in a slightly rejiggered form, on the singer's new album, Civilians. Formerly a slow, hookless strings-and-guitar ballad, it's now more sparse, more morose (assuming that's possible) and even lovelier. It feels simultaneously dark and desperate and lit from within, with that inexpressible combination of the hopeful and the grim ("We're taught to love the worst of us / and mercy more than life / But trust me, mercy's just a warning shot across the bow / I live for yours / and you can't fail me now") that's the hallmark of Henry's best work.