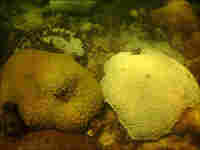 Two brain coral lie side by side. One retains its normal mustard color, while the other is bleached. Meaghan Johnson, The Nature Conservancy hide caption 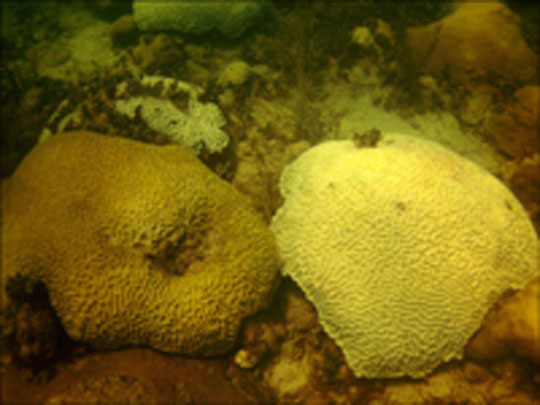 Two brain coral lie side by side. One retains its normal mustard color, while the other is bleached.

In Florida, the effects of global warming are evident several feet below the ocean's surface. Marine scientists say warming ocean temperatures are taking a toll on North America's only coral reef--an underwater ecosystem just off Florida's Atlantic Coast. At a reef that stretches from Palm Beach through the Florida Keys, rising temperatures have led to an increase in what scientists call "coral bleaching."

Rowena Garcia is a marine biologist with the Nature Conservancy, an organization based in the Florida Keys. She heads a project that for the last three years has been conducting surveys of Florida's coral reefs. The effort involves dive teams from a dozen different research groups and government agencies. On a recent day, Garcia and two Nature Conservancy staffers headed out to a small "patch" of reef about a half-mile offshore.

Coral reefs are sensitive to rising temperatures. An increase of just one or two degrees over a few weeks can lead them to expel the colorful algae that live in a symbiotic relationship inside their tissue. When that happens, Garcia said, the coral loses its color, becoming pure white.

"In essence, what you are seeing is the skeleton of the coral. The tissue of the coral becomes very translucent ... enough so that you will see the coral skeleton. That's really what we call coral bleaching," Garcia said. "In a lot of instances, it does not die. But what we have been seeing ... is once they are in this bleached state, they are weakened, and the disease comes in."

Nature Conservancy marine specialist Meaghan Johnson piloted the boat to a reef she has visited several times over the past few years.

"We've got a GPS point that we're looking for, and I'm just going directly to that," Johnson said. "We're just east of Munson Rocks which is right over there and we're in the inshore zone."

As the anchor dropped, the Conservancy staff could see the reef through the clear Florida Atlantic. Even from the surface, much of the coral's stark white color stood out. Another staff member, Jess Snook, put on her dive gear and got the tools she needed to measure and record the conditions of the reef.

"We just look for what coral is there. We identify it. We measure how big it is," Snook said. "And we look to see if it's bleaching or if it has any kind of disease or anything."

The women splashed into the ocean to get a closer look at the reef. It didn't take long to see how warmer ocean temperatures have affected this reef: As much as one-fifth of it is already bleached out. Later, they reflected on their findings.

"Normally this site wouldn't have all those boulder corals bleached. A lot of them would have color. You would see them a mustard brown color instead of being white," Garcia said. "Also, we saw some diseased corals in there."

Coral bleaching is a growing problem, not just in Florida, but also around the world. Scientists say the bleaching is clearly linked with rising ocean temperatures.

Bleaching itself isn't devastating to a reef. Given enough time and cooler water temperatures, the coral bounces back, capturing new algae and regaining its color. That happened in Florida when the hurricanes of 2005 helped lower temperatures in the Atlantic.

But because bleaching makes coral susceptible to disease, it can lead to its death. Scientists worry that persistent warm temperatures may have a lasting impact on coral reefs in Florida and around the world.