Accessibility links
Opera Legend Luciano Pavarotti Dies at Age 71 We remember Luciano Pavarotti, the most famous opera singer of the modern age. He died Thursday after a long battle with pancreatic cancer. We'll hear his performance of "Ah Mes Amis," an aria with nine high Cs.

We remember Luciano Pavarotti, the most famous opera singer of the modern age. He died Thursday after a long battle with pancreatic cancer. We'll hear his performance of "Ah Mes Amis," an aria with nine high Cs.

Luciano Pavarotti, King of the High Cs, Dies at 71 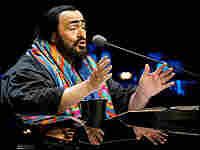 Pavarotti in concert on his farewell tour in Beijing in 2005. Getty Images hide caption 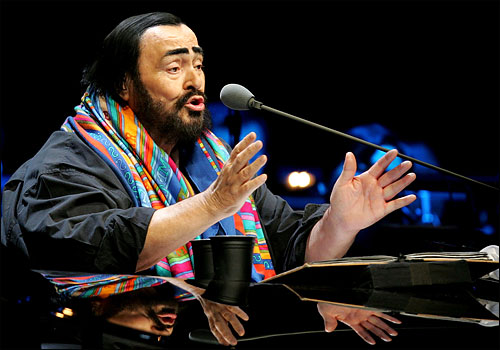 Pavarotti in concert on his farewell tour in Beijing in 2005. 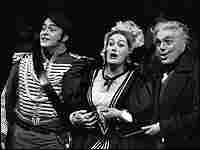 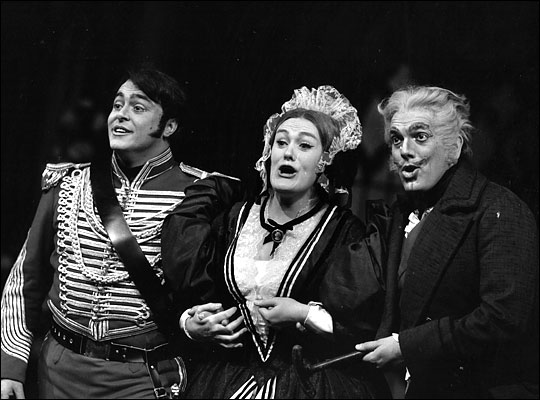 Seven recordings you must hear.

See the tenor in action. 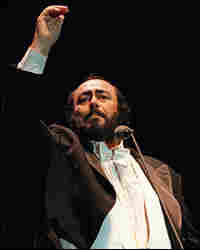 Luciano Pavarotti, unquestionably the most famous opera singer of the modern age, has died after a long battle with pancreatic cancer. Phil Walter/Getty Images hide caption

The world has lost the most famous opera singer of our time. Luciano Pavarotti died at his home in Italy after a long battle with pancreatic cancer. He was 71 years old.

Millions of people associate opera with two words: Luciano Pavarotti. That name alone sounds like a mini aria, albeit without one of the great tenor's signature high Cs (audio).

Anne Midgette, the New York Times critic who co-authored a tell-all book about Pavarotti with his former manager, says that at the tenor's peak, the brilliance of his voice was incomparable.

"There's a brightness to it," Midgette says. "There's also a very legato quality, a wonderful, lissome quality, a softness to it. There's this seductive sensuousness to the voice." (audio)

Pavarotti was born in Modena, Italy. His father was a baker and his mother worked in a cigar factory. As a young man, Pavarotti sold insurance to pay for voice lessons. He became internationally famous in the early 1960s, thanks in part to soprano Joan Sutherland. Sutherland was an imposing diva, substantially taller than many of her co-stars. She championed Pavarotti's talent, and appreciated his five-foot-nine-inch frame. The two performed together throughout their careers. (audio)

Pavarotti arrived on the scene at a moment when the opera world was experiencing a dearth of strong tenors. Opera News editor Brian Kellow says that for years, the major stars had been women, like Sutherland and Maria Callas.

"There was no one in the decade or two before Pavarotti came along who captured the public imagination to the degree he did," Kellow says. "He really was a phenomenon unto himself."

The tenor's name on a bill created what another critic called "Pavarotti Pandemonium." His popularity swelled after increasing his repertoire to include crossover tunes and Italian folk songs. (audio)

But Pavarotti was in general a shrewd self-promoter. As the Three Tenors, he, Placido Domingo and Jose Carreras sold out stadiums around the world, and their accompanying CD was one of the biggest-selling classical recordings of all time. Pavarotti also raised money for children in war-torn countries by performing with fellow celebrities such as Bono, Elton John, Suzanne Vega, and Sting. (audio)

Still, Pavarotti's propensity to cancel at the last minute irritated promoters and fans. In 1989, the Lyric Opera of Chicago banned him from the stage. In 1992, he was caught lip-syncing during a concert broadcast by the BBC.

Critics accused Pavarotti of coasting on his fame, and his performances lost their luster. He began to be booed. But Pavarotti's voice still sets the standard against which young tenors are measured. Juan Diego Florez is a rising Peruvian opera star who reveres Pavarotti.

"He's completely my idol," Florez says. "If I want to hear some tenor arias, I put on Pavarotti. There's no other way around. I wish I would have his voice, really — and if I couldn't have his voice, then his charisma."