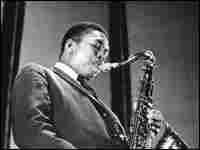 John Coltrane, who can be seen with Stan Getz and Oscar Peterson on a new DVD, performs live in the early '60s. Chuck Stewart hide caption 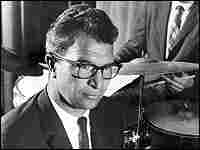 Capturing seven of America's greatest jazz icons at the height of their powers in Europe, a new DVD collection offers a fresh perspective on the likes of Duke Ellington, John Coltrane, Sarah Vaughan, Charles Mingus and Dave Brubeck.

Until this week, American audiences have never seen most of these revealing and remarkable '50s and '60s performances, which spent many years buried in European governmental archives. Through these seven DVDs, which benefit from excellent audio and video quality, viewers can glean plentiful insights on these legends' personalities and talents, their approach to music and their appearances and actions in a live setting.

This is the second Jazz Icons collection to be released on DVD. Journalist Ashley Kahn, author of The House That Trane Built: The Story of Impulse Records and a frequent Morning Edition contributor, appears in this segment to discuss what's special about the series and these performances in particular. Kahn, who wrote the liner notes for the Coltrane disc, describes the performances' circuitous journey from government-sanctioned European television to American audiences.

Among many rare treats, the set offers the opportunity to hear a German recording of Coltrane performing with Stan Getz and Oscar Peterson in 1960, as well as an assortment of illuminating between-song moments, such as the one in which Wes Montgomery teaches a song to a group of Dutch performers, in the process explaining its structure and tempo. Unlike most recordings for American TV at the time, the European shows simply rolled tape for moments that display the performers' personalities, whether it was Montgomery's graciousness, Charles Mingus' cantankerous nature, or Sarah Vaughan's nervousness as she performed in 1958.