Accessibility links
The Maestro of 'D'oh!' Makes a New Soundtrack Over the last 16-plus seasons, Alf Clausen has written the music behind the animated TV series The Simpsons. Now, on the eve of the program's 19th season, a new CD gathers some of Clausen's greatest hits, complete with cameos from famous guest musicians.

Listen
The Maestro of 'D'oh!' Makes a New Soundtrack 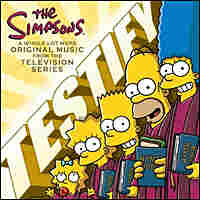 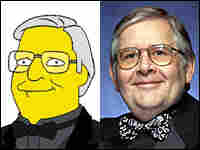 In two weeks, The Simpsons will begin its 19th season of dysfunctional family adventures and pointed social satire — and music.

The iconic animated TV series is filled with musical revues: parodies of Broadway and TV shows, fake commercials and famous artists satirizing their own work. Now, a new CD compiles 41 of the program's greatest hits from seasons 10 to 18: It's called The Simpsons: Testify.

Alf Clausen is the maestro behind the madcap music. After the new season premieres, he'll have composed the background tracks and special features for 383 episodes of The Simpsons.

Not bad for a man who wasn't originally interested in the job. Coming off stints scoring the shows Moonlighting and ALF, Clausen wanted to work with dramas and not animation. The show's producers brought him in for an interview anyway.

"One point in the conversation, [founder and executive producer] Matt Groening said to me, 'We look upon our show as not being a cartoon, but we look upon it as a drama where the characters are drawn, and that's the way we'd like to have it scored. You think you could do that?'"

So Clausen scored the first "Treehouse of Horror" Halloween special, the third episode of season two. Seventeen years later, he's still at it.

Much of Clausen's work can't be found on The Simpsons: Testify. His musical score underlying the show's action — usually involving 30 to 35 separate music cues — needs to be written, recorded and mixed every week of production. On a given Friday, Clausen will screen the episode. Then he receives timing constraints, composes the music spots, records the tracks, lays it up with the animation and views the complete episode on Sunday, just over two weeks later.

Clausen also writes original features for the show's characters, some of which do appear on the new soundtrack. Working from lyrics within the script, he writes the music behind the words. After the show's cast voices it, and the show is animated, he arranges and mixes a full orchestral score in the background.

Clausen says he has no specific training in writing parody, but that he works on it by listening carefully.

"What I end up doing is dissecting the music from the standpoint of what melodic elements, harmonic elements, rhythmic elements and orchestrational elements make it sound the way it does to the general listening public," he says. "It's one thing to be able to do that for musicians, but it's another thing to focus on what does it for the general public."

Clausen does have training in musical theatre, however. A short stay in New York allowed him to catch the original productions of shows like My Fair Lady, The Music Man and West Side Story, an experience he calls life-changing. Years later, he participated in a workshop for writing for the stage, and has since composed a handful of musicals sitting on his shelf.

"It's really fun to be able to work on a television production where I get the opportunity to practice that craft," Clausen says.

After more than 16 seasons with the program, Clausen continues to write new scores. He gave a preview of an upcoming episode in which, due to a back injury, Homer discovers he can sing opera. Clausen says he enjoyed the venture into satirizing high art.

"As Matt Groening once said, 'Sooner or later, we offend everyone,' and our music is no exception," Clausen says.