Accessibility links
Iraqi Watchdog Official Alleges High-Level Corruption In an exclusive interview with NPR, the official who headed Baghdad's anti-corruption watchdog alleges that Prime Minister Nouri al-Maliki interfered with his agency's work and tolerated bribery and cronyism in his Cabinet. 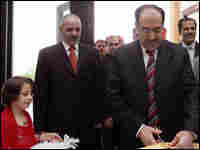 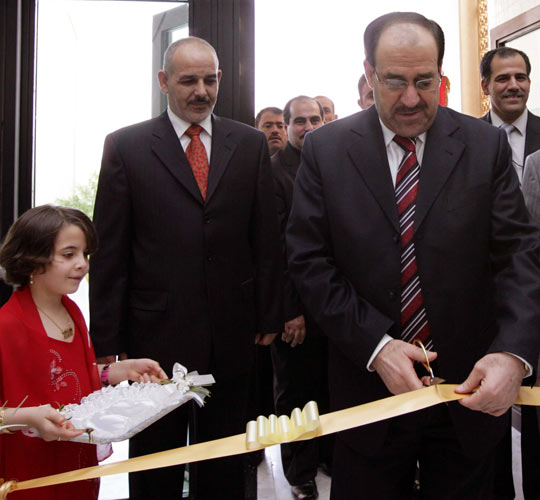 Iraqi Prime Minister Nouri al-Maliki cuts a ribbon during an opening ceremony for the National Operational Center in Baghdad, Sept. 2, 2007.

A secret order from the Iraqi prime minister's office bans the Commission on Public Integrity (CPI) from investigating top Iraqi officials unless they have the consent of Prime Minister Nouri al-Maliki. The order is signed by Maliki's chief of staff.

Memos between the CPI and Maliki's office chronicle how the prime minister's office blocked the appointment of a well-known and respected Iraqi investigator to be an inspector general in the CPI. The position was later filled by a political appointee.

The head of that agency, Radhi al-Radhi, has left Iraq for the United States and has been condemned by the Baghdad government.

Before he left, however, Radhi gave an exclusive interview to NPR, specifying that it could only be used if he was arrested, killed or had managed to get his family safely out of Iraq.

Radhi said the government corruption he has seen in three years as head of the Commission on Public Integrity has been widespread and costly.

"Most ministries are involved," he said. "Some officials, such as the minister of defense, have been dismissed, but we have about $4 billion in corruption cases there (and) $2 billion in cases involving the Interior Ministry."

In total, Radhi said his agency was investigating fraud and bribery believed to have cost the Iraqi government some $11 billion.

One draft report showed that in the six months prior to February 2007, high-level Iraqi officials managed to quash 48 corruption cases involving more than 100 defendants.

Radhi alleged that his agency was prevented from pursuing cases that directly involved Cabinet ministers and at least one member of al-Maliki's own family, former Transport Minister Salaam al-Maliki.

"We received different secret orders blocking (the) prosecution of former and current ministers," Radhi said, producing a copy of a letter that appears to be from the prime minister's office. The letter is signed not by Nouri al-Maliki, but by his chief of staff.

Radhi said the reason is so the prime minister can deny involvement.

A few days after giving the NPR interview, Radhi al-Radhi left Baghdad with some members of his staff to attend what he said was a previously scheduled training session in Washington.

About a week later, Prime Minister al-Maliki told reporters that Radhi had violated a government travel ban and accused him of fleeing Iraq to avoid charges against him in parliament.

"Parliament was supposed to vote on withdrawing confidence from him, sacking him and referring him to the courts," al-Maliki said.

Radhi said the charges were trumped up by al-Maliki's allies, and he said the reason he was able to leave Baghdad was simply that there was no travel ban against him.

The U.S. Embassy in Baghdad declined to answer specific questions about its report on corruption, but stressed that it was a draft and said there were doubts about the veracity of some of the sources used.

The draft report said that al-Maliki's government was incapable of even the most basic enforcement of its own anti-corruption laws.

It said the government had attempted to starve the Commission on Public Integrity by withholding its resources, and it accused government officials of trying to politicize the agency.

It said criminal elements in some government ministries were so violent and dangerous that commission inspectors could not safely do their work.

An employee of the Ministry of Interior, who asked not to be identified for fear of losing his job, or worse, said of the many corruption cases he's seen "the only ones that ever get to the courts are ones against low-level employees who don't have powerful friends to protect them."

He said official crime takes place at all levels of the department — from the lowest-level police officers, who have to buy their jobs, to high officials who accept bribes from suppliers to look the other way at the delivery of shoddy equipment at inflated prices.

"For example, just look at the contracts to buy armored vests for the police: The sample they showed us was high-quality, but when the shipment arrived, the actual vests were poorly made. No one ever followed through on that case," he said.

Like U.S. government departments, each Iraqi ministry has its own inspector general, but the official said many of them are political hacks.

"The inspector general of the Interior Ministry is Akeel al-Toraihee. He's from the Daawa Party. Any high position has to be filled by somebody from the big parties."

Our source said al-Toraihee, who is from the prime minister's party, has no prior experience that would qualify him to be an inspector general.

The official said corruption at the ministry has prevented the police from gaining much-needed training.

Courses offered by countries such as England and Germany are popular with senior police officials, who see them as a junket allowing them to relax abroad.

"Instead of sending the professionals to learn new fingerprinting techniques, we sent the ministry's food manager, because he was willing to pay a bribe to go on a two- or three-month rest trip," the official said.

Our source said part of the problem is turnover among U.S. military units that train and advise the Iraqi police.

When one unit goes home, a corrupt official will ask its replacement to pay again for items that were pilfered the first time around.

Radhi, the head of the Commission on Public Integrity, said the criminals in government shield their activities by threatening anyone who is willing to act against them.

"Two men from the Ministry of Trade came here to my office and accused me of working against the Shia," he said. "They said they were going to do something about it, and they threatened my life."

He does not take the threats lightly.

The draft State Department report said 12 members of the commission have been murdered in the line of duty.

Prime Minister al-Maliki suggested that the judge's decision to leave the country is proof that he was guilty of the charges leveled against him in parliament.

So far, Iraqi newspapers that have covered the story have focused on the prime minister's contention that Radhi is a fugitive who should be brought to justice for his crimes.

As long as he remains outside Iraq, it is uncertain whether the head of Iraq's anti-corruption watchdog agency can clear his own name, much less make a case against the officials he said are raiding his country's treasury.