Accessibility links
In 2000 Race, Clinton Worked to Change Image Though a veteran of her husband's campaigns, Hillary Clinton's first race as a candidate was for the Senate seat she now holds. Her biggest task was to make voters who thought they knew her — and disliked her — change their minds. 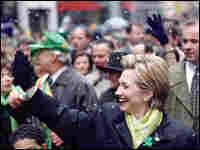 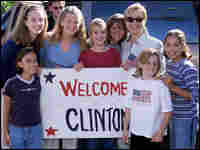 Hillary Clinton poses with local residents outside the Skaneateles, N.Y., home where the Clintons were staying in August 2000. The Clintons took their summer vacation in upstate New York that year. Tim Sloan/AFP/Getty Images hide caption 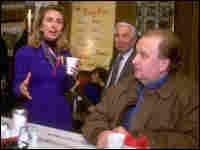 Hillary Clinton talks with voters about husband Bill Clinton's presidential run at Chicago's Busy Bee Diner in March 1992. Mrs. Clinton had many years of experience campaigning for her husband before she became a candidate. Steve Liss/TimeLife Pictures/Getty Images hide caption

Hillary Clinton's first campaign as a candidate was the 2000 Senate race in New York. But she had been on the campaign trail for years as a candidate's spouse. When she finally ran for office herself, she faced the challenge of changing the minds of many voters who thought they already knew her — and didn't like her.

For many, the seeds of that dislike were sown during Clinton's first days as first lady. When she came to the White House, she was wrapped up in the Arkansas real estate scandal known as Whitewater. Later, she was put in charge of a health care initiative that went nowhere. And when her husband, President Bill Clinton, had an affair with an intern, she found herself in the difficult position of defending both his reputation and her own.

New Yorkers also knew a lot about Clinton, when, in 2000, she dropped in on their state. She had never lived in New York, nor shown any special interest. But once she declared her candidacy for Senate, she began a process of re-making her image that sheds light on Clinton's ability to answer skeptics.

As a first-time candidate for Senate, perhaps Clinton's toughest challenge was one she set for herself — winning over people in conservative upstate New York. She caught a few breaks: She first expected to face New York City's Republican Mayor Rudy Giuliani — and no New York City mayor is popular upstate. Giuliani ended up dropping out of the race. But his replacement, Rick Lazio, was lackluster.

Candidate Clinton seized the opportunity, telling voters, "My opponent has ignored upstate New York. He made it very clear he has no intention of putting forth targeted economic help in order for upstate to have the economic prosperity it deserves to have."

Clinton won in a landslide, trouncing Lazio in the urban areas. As for upstate New York, Lazio beat her in almost every county. But she did better than expected — barely losing in places like Clinton County, where I recently visited.

In Plattsburgh, a city that sits on Lake Champlain, just below Canada, I met Bob Harrison, a Republican who is retired from heavy construction work. When asked if he voted for Clinton, he answered, "Not a chance."

But Harrison said his objections to Clinton are on policy, not personal, grounds: "It's not a personal thing — that I don't like her personally. She's made a lot of errors along the way in her husband's term, and she's made some now, by being so vehemently against the war."

That attitude toward Clinton is actually a sign of progress, according to Brian Mann, an upstate New York journalist who has written a book about rural politics.

Mann said voters all over the upstate area would have said far worse things about Clinton before 2000. Clinton has spent time studying rural issues, and that has won over at least some voters, Mann said. Now the question is whether she can translate that success elsewhere. Mann is not so sure.

"She has spent a lot of years here, and a lot of money, and done a lot of constituent outreach here," he said. "You don't have time for that in a presidential campaign."

Still, he said he's surprised she has done as well as she has in upstate New York.

That's certainly true when it comes to Nancy Saucier, a waitress at a restaurant in Plattsburgh. Saucier is a Republican. She voted twice for President Bush and did not support Hillary Clinton's Senate campaign — she found the former first lady "too showy." Nevertheless, Saucier said that as a senator, Clinton has brought money to Clinton County and made people feel as if she cares.

"This is a little town," Saucier said. "It's not what you call a city, like Albany. And she came here .... I think you got to know her more personally. That's how the city has felt, also. And she speaks very well, she smiles, she's friendly and she has good looks for a woman."

Nowadays, Saucier said she would even consider voting for Clinton for president — that is, if nobody in the Republican field excites her.

Something Left to Prove

Yet Clinton's experience in upstate New York also raises new questions about the challenges she faces in a presidential run. Concerns voiced by voters like Plattsburgh resident Jerry Levine, a Democrat who voted for Clinton to be his senator twice, are a prime example.

Levine calls Clinton "brilliant, just like Bill." Even so, now that she is running for president, Levine said he's not sure he'll stick with her.

"I'm not a female hater," he said. "I got three daughters and a great wife. It's just in this time, in this day and age, I wonder if she'd be a strong enough person to be at the head of the decision-making in our country right now."

That, Levine said, is what Hillary Clinton still has to prove.