Accessibility links
'3:10 to Yuma' Russell Crowe is the ruthless black-hat, Christian Bale the reluctant hero in this remake of the 1957 Western. Ben Foster (the angel-winged good kid in the last X-Men extravaganza) plays Crowe's murderous sidekick. 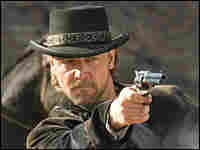 Russell Crowe plays Ben Wade, the ruthless charmer of a black-hat in 3:10 to Yuma. hide caption 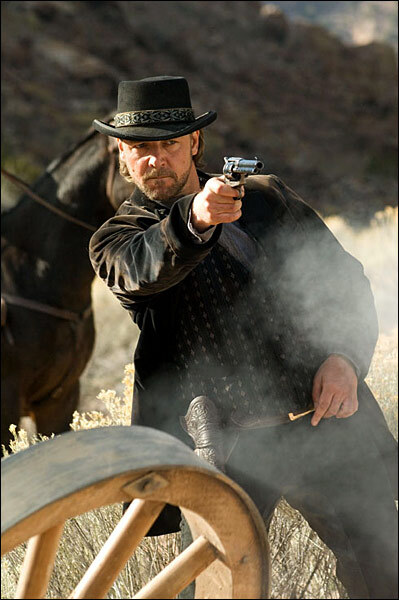 Russell Crowe plays Ben Wade, the ruthless charmer of a black-hat in 3:10 to Yuma.

The scenery's grand and wide-open, the motivations primal, and the bad guys wear black hats (well, mostly anyway) in this first of the season's big Westerns. And there's a climactic shootout, you'll be glad to know, that justifies all the sitting around the characters do while they wait for that titular train.

Russell Crowe's the bad guy, a ruthless killer who sketches birds and pretty girls when he and his gang aren't slaughtering innocents and robbing stagecoaches equipped with crankable machine guns. Christian Bale is the troubled but principled rancher who, for a variety of painstakingly established reasons, will escort Crowe to the prison cell on the first car of the Yuma-bound 3:10 train, come hell or high noon.

Nothing terribly original happens in this remake of a 1957 semi-classic that starred Glenn Ford and Van Heflin, but everything happens smoothly and with grace. Director James Mangold (Walk the Line) makes the emotions count and keeps the action fluid. And he's had the wit to allow Ben Foster (who was an arty wimp on Six Feet Under and sprouted an angel's wings in the latest X-Men extravaganza) to steal every scene he walks into — as the most implacably murderous of Crowe's henchmen.