Accessibility links
Guatemala Holds Peaceful Vote Mostly peaceful weekend polling leads to a run-off election set for November between a former general vowing to crack down on crime and a businessman promising to alleviate poverty. 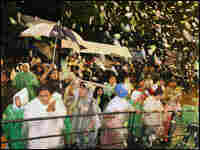 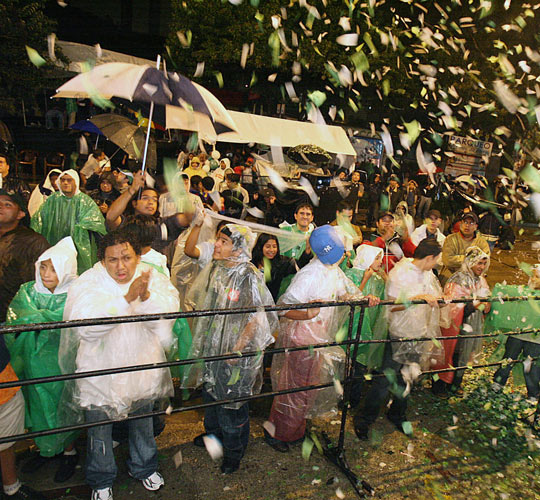 In Guatemala, mostly peaceful weekend polling has led to a run-off election set for November between a former general vowing to crack down on crime and a businessman promising to alleviate poverty.

With 68 percent of voting stations reporting, Alvaro Colom, a businessman and three-time presidential contender of the center-left National Unity of Hope Party, had 27 percent of the vote compared with 25 percent for Otto Perez, a former general from the conservative Patriot Party. Nobel Laureate and Mayan activist Rigoberta Menchu trailed with 3 percent, according to results published on Guatemala's Electoral Tribunal Web site.

Sunday's vote followed a campaign marred by the deaths of about 50 candidates, party activists and their family members. The poll took place under the watch of more than 34,000 police and soldiers.

At a polling center over the weekend in the colonial city of Antigua about an hour outside of the capital, indigenous women with babies tied papoose-style on their backs lined up next to men with crew cuts and dark glasses.

Many voters believe that Guatemala's political class is indifferent and corrupt...worse, the warlords are trying to get elected... suspected drug dealers are running for office in several parts of the country. Guatemalan law provides immunity for political candidates and elected officials.

Miguel Angel Gonzalez is a carpenter in the city of Antigua.

"I wish the candidates were disinterested in personal and material affairs and were capable enough to make this country better,but I don't see that," he said.

Whoever wins will lead a country that some analysts already describe as a failed state.

Guatemala has more than 5,000 homicides per year. The country of 12 million is also a main corridor for Colombian cocaine heading to the United States, and home to rampant corruption and a culture of violence left over from the 1960-1996 civil war.

Colom worked with civil war refugees in isolated highlands and is an ordained Mayan minister. He proposes increasing social spending to fight poverty and boost employment, and overhauling the judicial system.

"We are strong and we are going to win," Colom said after casting his vote.

Perez has responded to allegations that his human rights record from the war era is tarnished by demanding his accusers present proof of any wrongdoing. He promises a "firm hand" on crime, including hiring more police officers, using the military to fight drug gangs and instituting the death penalty.

Increased security will attract investment, he says – creating badly needed jobs in a country where 51 percent of the population lives on less than $2.

"It was the best kind of campaign and now it's a question of waiting for the results, which we are sure will be favorable," Perez said.