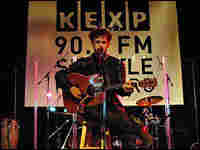 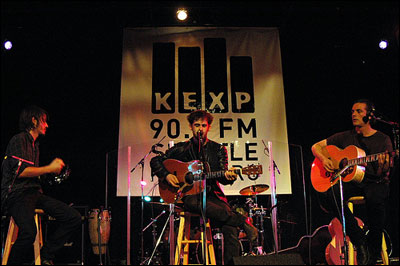 Hear the Music, Skip the Talk

Black Rebel Motorcycle Club can command a room, whether its members are playing a full-on, fuzzed-out electric performance or a stripped-down acoustic set, like the one they just played on the "secret stage" of the Bumbershoot Music Lounge.

In front of a full house, the original BRMC trio focused on songs from the country- and blues-heavy Howl. The opener, "Fault Line," was strummed and sung solo by Peter Hayes, a former guitarist of The Brian Jonestown Massacre. Though a relatively young man, he has an authentic sound, as if he were a musician at the end of his life. The audience was immediately captivated and the room stayed as quiet as a church.

As soon as Hayes slung the harmonica around his neck and drummer Nick Jago stepped out with a tambourine, it was clear that the tempo was about to change, and sure enough the pair launched into the slide-guitar blues of "Ain't No Easy Way." Toward the end of the song, Robert Been stepped out and followed with the Dylan-esque "Mercy," a song recorded during the Howl sessions but cut from the final mix. I heard Been once say that he wished they had kept it on the album, but that sometimes you don't always make the right choices. They certainly made the right choice performing it live — it's arguably their tightest and most moving song.

At this point, with their voices nicely warmed up, they swung into the grooving "Shuffle Your Feet," a song full of rousing harmonies. They then shifted effortlessly into "Love Burns," a heavy, feedback-laden single from their first album, which here reflected their bluesier late-period Americana sound.

BRMC ended the set with "Weapon of Choice," the first single from the recent Baby 81 and a much heavier song on record, performed with three acoustic guitars. Now that Nick Jago has made his six-string debut, it sounded equally lethal. At the end, the crowd — fans and DJs alike — was blown away.

Somewhat lost among the garage-rock revival of 2001 with the hit single "Whatever Happened to My Rock 'n' Roll," Black Rebel Motorcycle Club was unfairly pigeonholed in spite of a debut album that owed more to Ride and The Jesus and Mary Chain than The Stooges. Still, it continued to record, and weathered a tumultuous period that nearly led to the band's demise.

In 2005, BRMC returned fresh, suddenly stripped of the guitar noise that dominated past records. Howl featured a set of acoustic songs, bluesy and country in nature, that renewed public interest in the band. The band's latest is Baby 81.

Seattle-based KEXP presents a diverse mix of music, live performances and podcasts from indie rock and punk to jazz and old-school soul.