Accessibility links
Scientist Measures an Overlooked Greenhouse Gas Growing emissions of methane, a powerful greenhouse gas, could make projections for global warming far worse than estimated. Katey Walter, 31, is one of the first scientists to measure methane released from thawing permafrost in Alaska and Siberia. 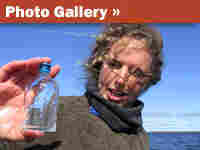 This summer, Katey Walter traveled from her base in Fairbanks, Alaska, to Barrow on the Arctic Ocean, to gather methane samples from a lake. Lindsay Mangum, NPR hide caption

This summer, Katey Walter traveled from her base in Fairbanks, Alaska, to Barrow on the Arctic Ocean, to gather methane samples from a lake. 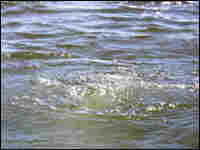 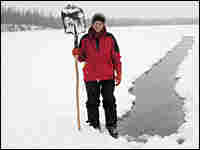 Katey Walter digs a 1-meter-by-50-meter path in a frozen lake in Siberia to count the patches of bubbling methane. Titov hide caption 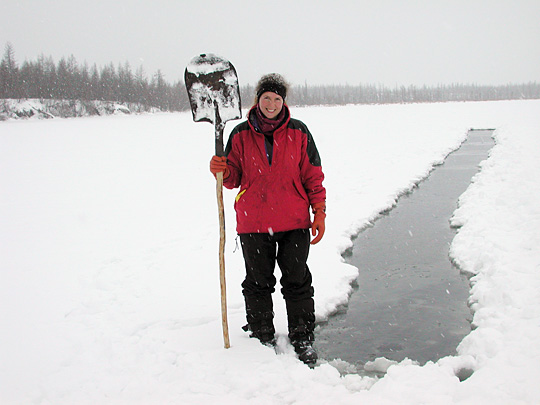 Katey Walter digs a 1-meter-by-50-meter path in a frozen lake in Siberia to count the patches of bubbling methane.

Methane is a greenhouse gas that is 23 times more powerful than carbon dioxide, which means it is much more efficient at trapping heat. As a result, methane feeds into a loop of global warming.

As global temperatures rise, permafrost thaws. Ponds and lakes form in the depressions left behind by melting chunks of ice in the ground. In the bottoms of ponds and lakes, bacteria feed on the carbon that previously had been frozen underground and burp it out as methane.

And because methane emissions from lakes haven't been carefully studied, scientists worry that projections for global warming could be far worse than currently estimated.

Walter, who teaches at the University of Alaska in Fairbanks, says that methane is being released from lakes in the far north — Alaska, Siberia, elsewhere — at a far greater rate than anyone has estimated.

One of the first people to calculate just how much methane is bubbling out of lakes, the 31-year-old Walter is passionate about her work.

Walter is what's known as a limnologist — from limne, the Greek word for lake. Her love for lakes goes back to her childhood in Oregon and Nevada and the hikes she took with her family in the Sierra Nevada mountains.

Her father and grandfather would ask her how the huge granite boulders in the area split in half so cleanly.

"It was ice that got in there ... and then when it freezes, it expands, and it has [the] strength to crack open those rocks — which is kind of ironic, because that's the same process I'm studying in the Arctic: the power of water in its frozen and unfrozen forms," Walter says. "I remember being inspired by those questions."

After majoring in biogeochemistry at the all-women's Mount Holyoke College, Walter got her Ph.D. measuring methane emissions in north Siberian lakes.

Last month, Walter took a research trip to the northernmost community in the United States: Barrow, Alaska, which is located on the Arctic Ocean, 340 miles north of the Arctic Circle. There, she gathered more methane samples, from a geyser of gas bubbling up from the bottom of a lake.

Walter's enthusiasm for her work is infectious. Recent years have provided many exciting research opportunities. But she knows there are tradeoffs. She thinks a lot about balancing her career and the family she'd like to have.

"I think a lot of women do make decisions for families rather than [for] doing science head on," she says. "And I've often heard women say you could do two of the three well — between being a scientist, being a mother and being a wife — but few that have said that it's easy to do all three."

For now, Walter will keep returning to Siberia to study lakes for months at a time.

"I think what's really exciting about it all is that the lake is going to get cold, and it's going to turn over, and gas is going to come out anyways, whether you're there or not," Walter says. "And so to be able to be there and watch it and understand what's going on, it's a great opportunity."

Recollections of Climate Research in Siberia 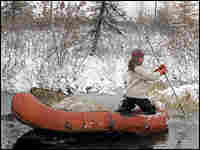 Walter paddles in one of the ponds near the Northeast Science Station in Cherskii, Russia. Nikita Zimov hide caption 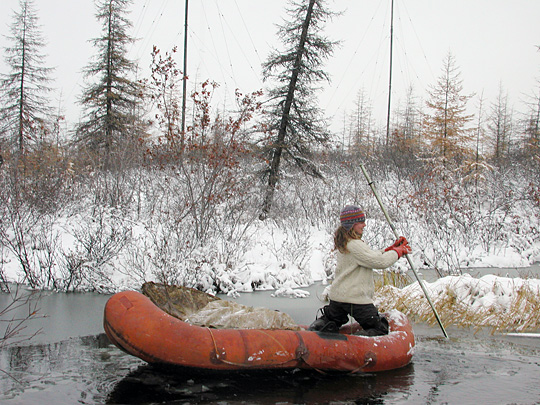 Walter paddles in one of the ponds near the Northeast Science Station in Cherskii, Russia.

In the summer of 2001, after an absence of nearly 10 years following her first introduction to the post-Soviet Russia as a high school exchange student in 1992, Walter returned to Russia as a doctoral student of limnology (the study of lakes). She spent the summer in Yakutia, in Russia's Far East, where there exists a unique set of permafrost conditions. Walter's mission in Siberia is to understand how ice melting in the ground surrounding lakes causes lakes to expand and release methane, a potent greenhouse gas that enhances global warming.

This summer field season is drawing to a close. Here in the Arctic, it is the change of season. After months of continuous light, the sun has begun to set behind the horizon in the evenings. The dwarf birch trees are turning red, and it is the time to gather blueberries, low-bush cranberries and red currants. The moon hangs high in our northern sky. For four days, the old man has shown his face, a bright reflection on the floodplain rivers, which these late summer days are turning from blue to black. We welcome the man in the moon. His nighttime cloak reminds us that we are human, exhausted from summer's long field days. Like high arctic plants that take advantage of the summer's continuous light to photosynthesize without rest, we too are subject to one intense work shift that lasts for two months. In the fall, darkness in the North brings rest to us all. The dwarf pine have already laid their heavy branches on the ground, ready for the first blanket of snow to fall, tucking them in for winter's rest.

Tonight is a beautiful night for a limnologist and her field assistant. [Field assistant] Dmitri and I anchor our little red rowboat in the middle of a large lake to measure the temperature, pH and oxygen contents of the water column all the way to the lake's dark bottom 33 feet below. Our northern lakes, lying in bowls of icy permafrost, can have bottom water temperatures near freezing. The large amount of methane that microscopic organisms can produce under these cold, dark conditions in the lake bottom sediments amazes me, especially given the slight energy they gain in these biochemical reactions. Unlike soil bacteria in the forest floor, which gain a lot of energy by using oxygen to decompose tree leaves, these methane-producing bacteria in the oxygen-free lake bottom can barely make a living. It is amusing to think that constraints of energy budgets on greenhouse gas emissions are not confined to the microbial world. These fundamental laws of thermodynamics govern also the political world of humans, and are the very reason for the United States National Science Foundation to sponsor this research expedition.

Dmitri and I work late into the evening, glad for the chilling wind that has carried swarms of summer mosquitoes and black flies far away. The evening light in the North is warm in color. Yellow streaks of sunlight break through the cloud cover, dancing on the lake surface; the backdrop is a pallet of blues- darks and lights are the hues of sky, mountains and brush. Autumn's first snow falls on us as we work, and we savor the thermos of hot tea that brings sense back into our numb fingertips.

Life is slow, simple, and sweet in Siberia. The days consist of studying lakes, hundreds of them in all sizes and shapes; the nights, of methane analysis on our old gas chromatograph which runs on a tank of hydrogen that was found abandoned in the tundra for 40 years- leftover from the Stalin days of atmospheric testing. In between I eat soup and black bread, and jog in the taiga. Only in the quiet, passing moments does this 26-year old woman remember that she is alone here in the Arctic. She wonders briefly whether or not she longs for a companion, and questions her chances of finding one among the tussocks and cranberries. Concerned, the Russians remind her that she should spend some of her time looking for a husband rather than working herself ragged on lakes. After all, "she is approaching the time in her life for bearing children." In their midst I laugh to shake these remarks, but in quiet moments their words echo back to me. Seasons change inside the heart as well. The days of filling myself on scientific query alone are drawing to an end, and like every young woman, I too wonder what the future holds. Having created bonds with people who never knew America, I know that my place in the world is a bridge not only in international polar science, but also across cultures.