Accessibility links
Opinions Vary on Rumors of U.S. Attack on Iran Recent days have seen a rise in rumors of possible U.S. military action against Iran, including plans for air strikes against nuclear and military targets. But do the rumors reflect a real possibility of an attack? Opinions are mixed.

Listen
Opinions Vary on Rumors of U.S. Attack on Iran 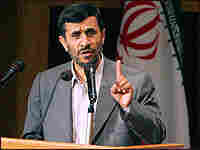 Iranian President Mahmoud Ahmadinejad speaks during a Non-Aligned Movement (NAM) meeting on human rights and cultural diversity in Tehran on Sept. 3. The head of Iran has said the United States will not attack the country. Atta Kenare/AFP/Getty Images hide caption

The past couple of weeks have seen an increase in the rumors of possible U.S. military action against Iran.

The Internet is full of speculation that the Bush administration has prepared plans for air strikes against Iranian nuclear and military targets — and that it is launching a propaganda campaign to prepare the public for such action.

But opinions vary over whether these rumors reflect the real possibility of a U.S. attack on Iran.

The rumors of war with Iran spiked after President Bush's speech to the American Legion in Reno, Nev., on August 29, in which the president said Iran has long been a source of trouble in the Middle East and that it is the world's leading state sponsor of terrorism.

"...and Iran's active pursuit of technology that could lead to nuclear weapons threatens to put a region already known for instability and violence under the shadow of a nuclear holocaust," Bush said.

For many, this sounded a lot like the speeches the president and his top advisers gave about Iraq in the fall of 2002. One especially similar statement for some was this:

"Iran's actions threaten the security of nations everywhere. And that is why the United States is rallying friends and allies around the world to isolate the regime. To impose economic sanctions. We will confront this danger before it is too late," Bush said during the speech.

These words were probably the toughest the president has spoken about Iran, and they have been noted carefully in Tehran, according to Farideh Farhi, an expert on Iran at the University of Hawaii.

"Iran is under threat, openly and surreptitiously, and the threat comes from the American desire to undermine the Iranian political system," Farhi says.

But the reaction in Tehran is complex. There are some in the Iranian government who fear the possibility of American attack and who want to see better relations between the two countries. The recent improvement in Iran's cooperation with the International Atomic Energy Agency could be evidence of this.

But this is not the attitude of the hardliners in Tehran, led by President Mahmoud Ahmadinejad. Ahmadinejad's hostile rhetoric often is designed to undermine the more moderate figures in Iran's government, says Abbas Milani, director of Iranian studies at Stanford University.

"I actually believe that the Ahmadinejad camp is enthusiastically hopeful that the confrontation with the U.S. will continue," Milani says. "This is their ticket to victory, and the best thing that can happen to them is if these ostensible plans for invading Iran come to fruition."

Similarly, the Bush administration is divided over how to deal with Iran, with advocates of diplomatic engagement in the State Department — there have been two rounds of U.S.-Iranian talks in Baghdad this year — having to fend off pressure from more hard-line figures, like Vice President Dick Cheney.

It's not clear at the moment who is winning this battle, says Karim Sadjadpour, of the Carnegie Endowment for International Peace.

"Because the State Department hasn't been able to show that these talks have borne any fruit, more hard-line elements within the Bush administration, like the vice president, can say 'Well, why are we even talking with Iran? Talking with Iran is an exercise in futility — the Iranians are simply trying to buy time before they can get a nuclear weapons capability or even use a nuclear weapon. And we should just bomb them now rather than later,'" Sadjadpour says.

"The danger is that these two camps will do for one another what needs to be done to make their desire come true," Milani says.

But the war talk in Washington could simply be pressure designed to persuade Iran to change its behavior, on the nuclear issue and inside Iraq, Farhi says.

"It's uncanny whenever there are negotiations between the IAEA and Iran, there are always press reports about possibility of military action against Iran," Farhi says. "These kind of drumbeats are essentially used as a means to intimidate Iran."

The danger of course is that such talk on both sides could lead to miscalculations, and the two countries could stumble into a military confrontation neither really wants.