Accessibility links
Battles Creates a Musical Hall of Mirrors Battles looks like a normal quartet, but it doesn't act like one. Band members play two or three instruments simultaneously and then digitally loop the sounds they've just made. So the group, in essence, becomes five, six or seven members at once. 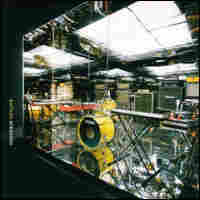 I'd been hearing about Battles for a while. Last year, the band's Brooklyn neighbors in TV on the Radio — who made what I think was the best rock record of 2006 — were talking them up in interviews. I'd even heard that David Bowie was a Battles fan. Not bad for a group that didn't even have a full-length record out yet.

I saw Battles play a sold-out gig at New York City's Bowery Ballroom this past April, and they killed it. Although as rock shows go, it was admittedly a little strange: Most of the songs had no vocals, though occasionally, from behind his keyboard rack, Tyondai Braxton would shout or chant phrases into a microphone, which was run through pitch shifters and other devices so his vocals came out sounding something on "Atlas."

Being a geek about this stuff, I could tell you about how Battles' members construct their songs by stitching together little segments they give absurd names to, like "Burkina Faso" or "Joey Buttafuoco." Or I could tell you that Braxton is the son of the great renegade jazz composer Anthony Braxton. Or I could tell you how some of the members dig old '70s prog-rockers like Yes and Rush and King Crimson, groups that — after being considered uncool for years — are now honorable indie-rock touchstones.

Judging from the crowd at the Bowery Ballroom in April, you clearly don't need to be a geek to appreciate Battles. I mean, normal-looking people were actually dancing to this music. But for all their geekiness, these guys rocked, and they do it in a way that really doesn't sound much like anyone else. The cover of their new CD is a kind of musical hall-of-mirrors, which is an apt metaphor for the sound. I think it's a cool place to hang out in.