Accessibility links
Scholar Held in Iran Returns to Work in D.C. After spending four months in Tehran's Evin Prison, a Woodrow Wilson Center scholar was back at work Monday. Haleh Esfandiari, who runs the Middle East program at the Washington-based center, met with reporters to talk about her time in captivity.

Listen
Scholar Held in Iran Returns to Work in D.C. 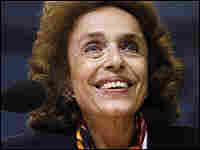 After months in an Iranian jail, Haleh Esfandiari was back at work Monday at the Woodrow Wilson Center in Washington, D.C. Esfandiari, 67, who runs the Middle East program at the center, told reporters how she kept her spirits up while in solitary confinement after being accused of trying to promote a velvet revolution in Iran.

She said it was hard to lose eight months of her life, and that as a sociable person, she had many bouts of loneliness and despair while in prison. So, she says, she exercised every day and started a routine.

"I always remember my friends who went to English boarding schools who told me that in the evening, you change and have dinner," she said. "... So I changed around 6 p.m. and then started reading."

Two other Americans are still being held at Evin Prison. Esfandiari says she only learned about California peace activist Ali Shakeri once she was out, but she knew that Kian Tajbaksh, an urban-planning specialist, was there.

"We must have shared the same interrogator," she said. "I saw the interrogator carrying five or six books and my eyes lit up and I said 'Oh, English books! Whose are these?' And he said, 'Mr. Tajbaksh.'"

She said that Tajbaksh started lending her books — passing them through the guards — though she said she never talked to the guards about his case. Tajbaksh's colleagues at the Open Society Institute say Iranian authorities have indicated he might be released soon on bail.

Esfandiari was in Iran to visit her mother. She said she never really understood why she and the others were arrested. She spent many hours trying to persuade Iranian interrogators that the Wilson Center is a transparent think tank, not part of some subversive effort to undermine Iran's regime. She thinks she was freed in part because the center's president, former congressman Lee Hamilton, exchanged letters with Iran's supreme leader.

Esfandiari says she plans to stay at the Wilson Center, though she probably won't be holding conferences on Iran anytime soon. She always has and still does advocate direct talks between Iran and the United States.

Asked how she feels about the Iranian government now, she says she was angry at times but doesn't hold a grudge.

"I feel a great sense of disappointment," she said. "It is as if all your efforts all these years were not appreciated and were misunderstood."