Accessibility links
Iraqi Refugee Helps Others in Damascus Ahlam al Goubori, a mother of three, believed in the American project in Iraq. She signed on to rebuild her country and was kidnapped and tortured in reprisal. She now teaches in Damascus. 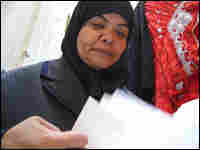 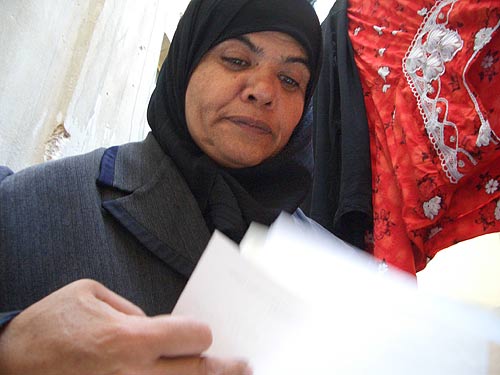 Ahlam al Goubori runs an English class in her tiny apartment in Damascus.

Ahlam al Goubori, a 42-year-old mother of three, believed in the American project in Iraq. She signed on to rebuild her country and was kidnapped and tortured in reprisal.

Her story is all too common among Iraqi refugees in exile in Damascus. Goubori is one of the few Iraqis willing to admit working for the United States in Iraq.

"I have so many friends working for the Americans," she said. "But they never say so because they are afraid."

Goubori said that members of Iraq's deadly militias have spies within the refugee community in Syria. "They have their own 'eyes' in every district, so the Iraqis are afraid that their families will be targeted back home."

She said she feels abandoned by the government she worked for. A refugee now, her application for resettlement in the United States is on hold, she said. "I'm qualified, but I am waiting for the answer. The American government will judge it," Goubori said, as she flipped through the stack of recommendations.

Goubori and her family fled to Damascus two years ago after her brothers paid a ransom to Al Qaida in Iraq to save her life. She was tortured for eight days and had a mild heart attack after her release.

A small apartment in Damascus is now home, furnished with threadbare couches, floor mats for beds and little else.

She keeps a tidy blue folder of letters, recommendations from Americans who said they were grateful for her humanitarian work.

Between 2003 and 2004, she worked on compensation for Iraqi claims for civilians injured or killed by the U.S. military. She served on the city council in Taji, arranging medical care for the poor and handicapped. She became a victim of the deadly sectarian divide and hatred the U.S. occupation unleashed.

Her life in Damascus is a mirror of her work in Baghdad; she has opened a classroom in her small apartment, offering English and French classes four times a week. A library of dictionaries is stacked on the ironing board. For some of the young refugees, this is the only school they have.

"I am concerned about the girls, especially. They need to be educating, they need to finish schools," Goubori said. She has a degree in business administration and learned English at a British Embassy program in Baghdad. Her father, a farmer, pushed his daughter to learn — and she wants to pass this on to her own daughter and the Iraqi girls in this neighborhood over flowing with refugees.

Goubori said she does not expect to go back to Iraq, even if there is no fighting.

"Something broken inside me," Goubori said. "After all that I did, and I get kidnapped and threatened and Iraqis forced me to leave Iraq. This broke my heart."