Accessibility links
Making 'History' with Familiar Ingredients The Bell's wiry guitar-rock recalls many of the bands that came up in the wake of, or were contemporaries to, Echo and the Bunnymen. The group's debut CD, Make Some Quiet, draws on these influences, while also recalling the post-punk pop of Interpol. 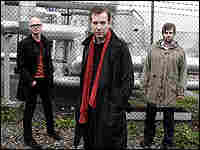 The Bell plays wiry guitar-rock in the tradition of Echo and the Bunnymen. Marcus Raberg hide caption

Legend has it that the "Echo" in the band Echo and the Bunnymen represented the drum machine the group used before it recruited percussionist Pete de Freitas. The band denies it, but the story lives on.

The Swedish pop group The Bell doesn't have a name for its drum machine, but if the Bunnymen are going to deny Echo its place in history, this new trio should snap it up. It's not just The Bell's drum machine that gives it a right to the Echo name. The group's wiry guitar-rock also recalls many of the bands that came up in the wake of, or were contemporaries to, the Bunnymen, such as House of Love, The Mighty Lemon Drops and The Church. The Bell's debut CD, Make Some Quiet, draws on these influences throughout, and modern music fans will likely hear Interpol in the group's post-punk pop.

Make Some Quiet's first single, "I Am History," finds singer Mathias Stromberg waxing philosophic in a cold-wave deadpan that sounds like a less throaty version of House of Love's Guy Chadwick. Instrumentalists Nicklas Nilsson and Jan Petterson keep the music tense and propulsive, assisted by a maraca-and-handclap-suffused drum pattern. The song seems to be about existential dread, or some tale about the loss of self: "Suddenly I realized I am the one no one can see / Suddenly, when no one knows, I will go down in history." Echo may be invisible here, but its history blares out loud and clear.