Accessibility links
Pakistan's Sharif Challenges Deportation in Court Lawyers for Nawaz Sharif are challenging the former prime minister's deportation, taking the matter to Pakistan's highest court. Sharif's lawyers are asking the Supreme Court to hold the government in contempt for deporting Sharif to Saudi Arabia. Last month, the court ruled that Sharif had an "inalienable right" to return home and that authorities should not obstruct him. 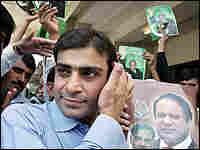 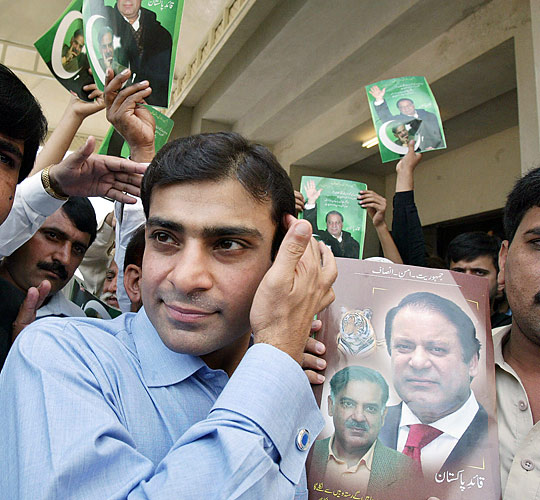 Hamza Sharif, the nephew of former Pakistani Prime Minister Nawaz Sharif, leaves the Supreme Court after filing an appeal of his uncle's deportation.

Lawyers for Nawaz Sharif mounted a legal challenge to the former prime minister's deportation on Tuesday, taking the matter to Pakistan's highest court.

Sharif's lawyers asked the Supreme Court to hold the government in contempt for deporting Sharif to Saudi Arabia. Last month, the court ruled that Sharif had an "inalienable right" to return home and that authorities should not obstruct him.

"We will fight this battle in the court of law," said Hamza Sharif, Sharif's nephew, after the petition was filed. "We are fully confident that we will win, God willing."

President Gen. Pervez Musharraf sent Sharif back into exile on Monday just four hours after the former leader returned to Pakistan. Sharif, who planned to campaign against Musharraf in upcoming presidential elections, was also charged with corruption.

Deputy Information Minister Tariq Azim told the British Broadcasting Corp. that the government obeyed the Supreme Court ruling to let Sharif enter the country, but that the former premier chose to go back into exile to avoid facing trial.

Sharif was originally exiled in 2000 following a coup led by Musharraf. Sharif was jailed but later released and sent to Saudi Arabia after allegedly pledging not to return for a decade.

"No hindrance or obstacle was placed upon his entry into Pakistan," Azim told the British Broadcasting Corp.

Interior Ministry spokesman Javed Iqbal Cheema said the government has done nothing wrong and will respond to Sharif's petition if the court accepts it.

Meanwhile, several hundred people protested against Sharif's deportation and the Musharraf government. Musharraf has allied himself closely with the United States since the Sept. 11, 2001, attacks.

About 200 members of Sharif's party and other opposition groups blocked traffic on a road in Lahore, chanting slogans including, "America has a dog in uniform," a reference to Musharraf.

The Supreme Court has been successful in checking Musharraf's power since his failed attempt to fire the country's top judge earlier this year that sparked a nationwide protest movement.

The court is already considering petitions that challenge Musharraf for holding of the post of army chief and president simultaneously and his eligibility to contest upcoming presidential elections.

Judges are also pressing the government to provide information about the fate of hundreds of people allegedly held by Pakistani intelligence agencies on accusations of terrorism and anti-government activities.

Analysts say Monday's decision to expel Sharif will deepen Musharraf's unpopularity in Pakistan and reinforce impressions that he is an authoritarian leader. It could also undermine the legitimacy of legislative elections due by January 2008.

The battle with Sharif comes at a critical time for Musharraf. The Pakistani president is struggling to stabilize the region near the Afghan border, where Islamic militants have stepped up their anti-government campaign.

On Tuesday, a suicide bomber blew himself up near a pickup truck carrying passengers, killing up to 18 people, officials said.

Ali Ahmed Kurd, a senior member of the Pakistan Bar Council, said lawyers across the country were boycotting court proceedings to protest Sharif's deportation. In Karachi, lawyers were also protesting the shooting of a colleague they said was targeted because of his opposition to the government.

"The system is based on the crutches of a uniformed president, and the day these crutches are removed the present political system will collapse," wrote Urdu-language newspaper Nawa-I-Waqt in an editorial, one of several that judged the move to exile Sharif was an act of desperation by Musharraf.

Sadiq ul-Farooq of Sharif's Pakistan Muslim League-N party insisted that Sharif had volunteered to be arrested by police at Islamabad airport after he was served a warrant.

He estimated that more than 5,000 Sharif party workers and leaders have been arrested nationwide in recent days, including the party's chairman and former Pakistani President Rafiq Tarar.

The Interior Ministry said about 1,000 people have been taken into custody.