Accessibility links
Iraqi Refugees Begin to Arrive in Atlanta More than 4 million people have fled their homes in Iraq since the war began. Washington had said it would allow about 7,000 to enter the U.S. by the end of September. Two families who recently arrived in Atlanta are among the first Iraqis who have made it. 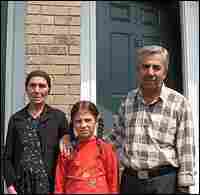 Iraqi refugees (from left) Ashy Yalda, her granddaughter Raghed Toma, and her son Gorges Yonan stand in front of their new apartment in the Atlanta suburb of Doraville. Kathy Lohr, NPR hide caption 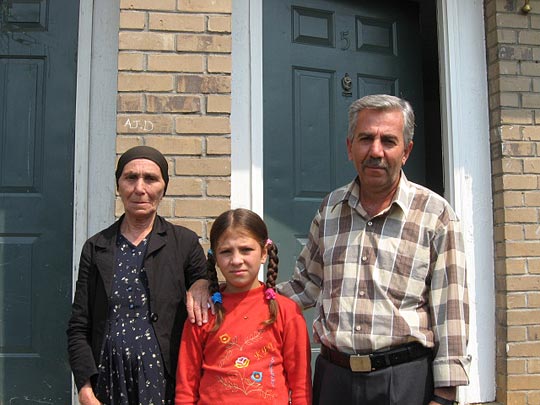 Iraqi refugees (from left) Ashy Yalda, her granddaughter Raghed Toma, and her son Gorges Yonan stand in front of their new apartment in the Atlanta suburb of Doraville.

Displaced Iraqis in the Middle East

Estimates include recognized refugees, asylum seekers and other Iraqis who may be in need of international protection.

More than 4 million people have fled their homes in Iraq since the war began. According to the United Nations, about half of those have become refugees in Syria, Jordan and other neighboring countries.

The U.S. government initially said about 7,000 Iraqi refugees would be allowed into this country by the end of September, but few have made it so far.

"It's a very slow response to this crisis," says Ellen Beattie, with the International Rescue Committee in Atlanta.

"There are literally millions of Iraqi refugees in Syria, Jordan, Lebanon, Turkey and the [Persian] Gulf states, and they are all in very precarious and dire circumstances there," Beattie says. "They're struggling economically, academically and [they're] unable to build a new life."

In February, the State Department said that as many as 7,000 Iraqi refugees who are the most vulnerable would be allowed into the United States. They include those with health problems, single moms and those targeted because they helped the U.S. government. To date, only about 850 have arrived.

Assistant Secretary of State Ellen Sauerbrey says there has been confusion over the number of refugees expected to be resettled.

"There was no infrastructure in place to do multiple interviews that are required under law for refugees coming from anywhere in the world," she says.

Because of concerns about terrorism, Iraqi refugees have to go through a "particular security protocol" before any could come to the United States.

"It's taken time to put all the pieces in place, but now the flow is beginning to move much more rapidly," Sauerbrey says.

After just a trickle over the spring and summer, 529 refugees arrived in August. Sauerbrey says the goal is for another 500 to 700 to arrive by the end of this month.

There are eight in the Yonan family, including Gorges, the father; his wife, five children and the grandmother, Ashy Yalda. Outside the family's new apartment in America, Yalda tries to communicate, but she can't speak English.

Through a translator Yalda says, "People from Iraq are not different than you." She says she's worried about her daughter, who is still in Iraq.

The entire family heads to the apartment office where the parents will sign a lease, one of the first steps in getting settled here.

Gorges Yonan worked with the U.S. Army as an electrician in Iraq. That's why he says his family had to leave the country. His brother, who also worked for the Army, was killed. Then, Yonan received anonymous phone calls threatening his family.

Yonan says he sold everything he had — his house and his car — to get enough money to get out of Iraq. In 2004, the family headed to Turkey.

Life there was difficult, according to Yonan. He had no job. A family member sent some money to help them get by. For the past two years, only two of his children were able to attend school.

The second Iraqi family to arrive in Atlanta is a single mom with three children. They sign up for school at the International Student Center in Dekalb County. Bothinaa Mohammed can only say a few words of English, but they are powerful.

Mohammed has spent hours waiting and registering. She says her three children were not allowed to go to school in Jordan where they've lived the past four years. She's thrilled they'll have the opportunity here.

"Back home we were suffering a lot," Mohammed says. "But I hope everything will change. I like the school building and I think my children are going to learn a lot."

The children from both Iraqi families began school this week. The adults began taking English classes and will spend the next few weeks figuring out their new surroundings.