Accessibility links
McKellen Takes On Another Dark Mountain: 'Lear' Before The Lord of the Rings made him an international superstar, Ian McKellen was known as the finest Shakespearean actor of his generation. Now he's touring the United States in the Everest of classical roles — Shakespeare's tormented King Lear. 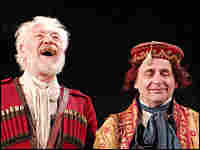 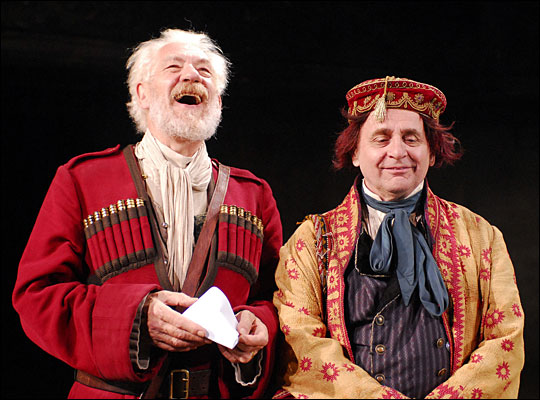 Ian McKellen as Lear and Sylvester McCoy as his Fool. 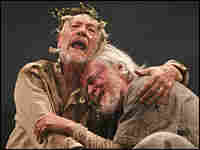 McKellen as the mad Lear, with William Gaunt, whose Duke of Gloucester has been blinded by the king's politically ruthless daughters. Manual Harlan/Royal Shakespeare Company hide caption 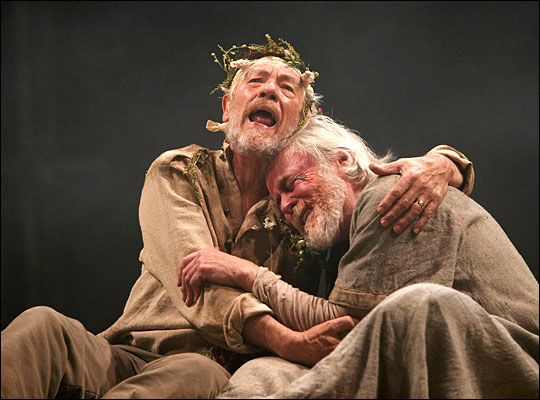 McKellen as the mad Lear, with William Gaunt, whose Duke of Gloucester has been blinded by the king's politically ruthless daughters.

The RSC on Tour

King Lear and The Seagull run in repertory at the Brooklyn Academy of Music through Sept. 30. In October, they'll play first in Minneapolis and then in Los Angeles, before moving to London.

Ian McKellen played Richard III — Shakespeare's bloodiest and most charming villain — in a Royal National Theatre production that toured the U.S. in the early 1990s and was later made into a film.

Now, in an Emmy-nominated Web interactive on the National Theatre's Stagework site, he deconstructs Richard's most famous speech line by line.

It's an illuminating look inside a process actors call "text work" — an example of just how much work goes into creating a role in the classical theater.

In the U.S., most people know Ian McKellen as the villainous Magneto in the X-Men movies — and of course as the wizard Gandalf, in the Lord of the Rings trilogy.

But long before he became an international superstar, McKellen was known as the finest Shakespearean actor of his generation. He's played Romeo, Macbeth, Iago, and Richard III (on stage and on film) and now he's touring the United States with one of the greatest Shakespeare roles of all time: King Lear.

"King Lear is, without a doubt, the Shakespearean role to which any Shakespearean actor aspires," says Matt Wolf, theater critic for the International Herald Tribune. "And there was a sense of inevitability, I think, about Ian McKellen playing this part. The question was always when would he play it? And for whom would he play it?"

The answer is now, and for England's Royal Shakespeare Company.

At this point in his life, McKellen could be sitting happily on yacht or beach or villa, spending all that Lord of the Rings loot. But the 68-year-old actor has committed himself to performing King Lear — along with Anton Chekhov's The Seagull — for an entire year, in a tour that's crisscrossing the globe.

While McKellen is unquestionably the star, he says it's a privilege to be part of an ensemble.

"This group of actors, the Royal Shakespeare Company, have come together to work for over 12 months on two plays," McKellen says. "And we don't do that lightly, but we do it with enormous joy, because it's at the heart of why we became actors in the first place — we want to communicate with audiences."

Both productions have been directed by McKellen's Cambridge classmate and frequent collaborator, Trevor Nunn, who's as well-known for his interpretations of the classics and new plays as he is for directing Broadway blockbusters like Cats and Les Miserables. He says he's not alone in thinking McKellen is giving an indelible performance as Lear, the great monarch who divides his kingdom amongst his daughters and degenerates into madness.

"I'm very delighted to report that pretty unanimously, the press in England have made their judgment that Ian has given one of the great performances of his career," Nunn says. "Some of them have said the greatest performance of his career."

For McKellen, King Lear operates on many levels — the cosmic, the political and the domestic among them.

"If I wanted to hang the whole performance, the whole play, on one line," he muses, "it would be when King Lear is crying out, as his life is collapsing around him, and he feels he's being battered by cruelty, and he calls up — to the gods, perhaps — and says, 'Is there any cause in nature that makes these hard hearts?'

"And that is a question that still puzzles psychologists and psychiatrists and doctors and anyone with feeling about life," McKellen says. "Where does our ill behavior come from? Are we born with it? Do we learn to do it? Is it madness? Is it sanity? What is it? And those are the sort of depths that the play goes into. At the same time, it's a family drama that everyone can respond to."

Over the course of the tragedy, Lear gets stripped of all he possesses — his power, after he surrenders his dominions to his daughters; his family, after they turn against him; his sense of self, after he's driven into the wilderness.

Indeed, in a famous scene, raging against a storm, McKellen's Lear even strips naked. At the play's conclusion, when he cradles his dead daughter Cordelia, Lear has lost everything.

Both King Lear and the Chekov play — a very different kind of drama indeed — opened on the same day in June at the Royal Shakespeare Company's home theater. In the Chekhov, McKellen plays the smallish role of Sorin, brother to a famous actress. He says part of The Seagull's appeal is that it's about the theater.

"There's a play within the play ... and there are two professional actresses onstage, there are two professional playwrights, there's the failed actor here, and there's the fan who never stops telling boring stories about plays he's seen," McKellen explains. "For anyone who loves the theater, The Seagull is the play that reveals all our frailties and all our longings."

Wolf, the International Herald Tribune critic, says seeing both plays in one day was a unique opportunity to observe McKellen's virtuosity up close.

"What is fascinating is to see somebody like McKellen switch gears, shift degrees of intensity ... change tone and focus," he says. Playing both roles in repertory requires "going from a majestic, titanic Shakespeare tragedy to a mournful Chekhov play, but a Chekhov play that is, essentially, much more intimate. I mean, The Seagull is not a play that has the seismic jolts that King Lear possesses."

Frances Barber plays both the fluttery actress Arkadina in The Seagull and the ungrateful daughter Goneril in King Lear. As dissimilar as the two plays are on the surface, she says, they work well together — intellectually and emotionally.

"They complement each other," Barber says, in that they have to do with "families ... and despair and unfulfilled desires, longings and, yes, spiking your heart in the end. So, I think it's a wonderful idea to watch one in the afternoon and one in the evening — bring some sandwiches!"