Accessibility links
First Race Teaches Huckabee to Trust His Instincts Mike Huckabee has ignored campaign advice that runs counter to his instincts ever since he lost a U.S. Senate bid in 1992. Consultants had advised the Baptist pastor to attack his opponent, Sen. Dale Bumpers, and the strategy backfired. 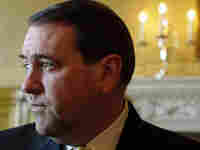 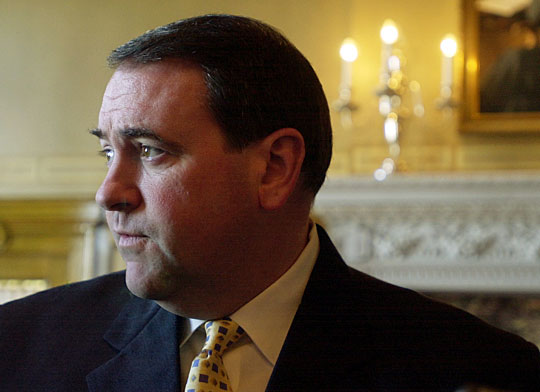 Former Arkansas Gov. Mike Huckabee, featured here at a 2002 press conference before his dramatic weight loss, felt the sting of defeat early in his political career.

Read about Mike Huckabee's political career and his prospects as a presidential candidate.

After losing a bid for U.S. Senate in 1992, Mike Huckabee vowed that he would never again heed campaign advice that went against his instincts. Huckabee, a Baptist minister at the time, challenged Sen. Dale Bumpers, a liberal Democrat, but was soundly defeated after a campaign strategy suggested by political consultants backfired.

At that time, more than one-fifth of Arkansas voters were members of the Southern Baptist church. And it was as head of the state Baptist convention that Huckabee decided to take on Bumpers, one of Arkansas' most popular politicians. Bumpers was more than just popular. The folksy three-term senator and former governor had reached political icon status.

But Bumpers was also liberal. In running for the Senate, Huckabee thought Arkansas voters were ready for a change. Looking back now, he says he was wrong.

"It was David goes against Goliath, and this time David forgot to put the rock in his sling," Huckabee said.

With little state-party organization to draw on, Huckabee hired political consultants with national expertise. But Bumpers easily defeated Huckabee after a nasty campaign that featured negative ads and character attacks.

"Huckabee ran what we would call kind of a cookie-cutter right-wing campaign against Bumpers, attacking him, among other things, for his support for the National Endowment for the Arts which he said, in effect, that Bumpers was supporting pornography," said Hoyt Purvis, a professor of political science at the University of Arkansas.

"People in Arkansas felt like they knew Dale Bumpers and that Dale Bumpers was not a pornographer or not somebody who supported pornography and in this case, Huckabee had kind of gone over the line," Purvis said.

Huckabee says the experience taught him a lesson about following the advice of outside political consultants.

"You need to go with your own gut instincts and not let people around you push you into things, particularly if they're consultants, because when the campaign's over, they disappear," Huckabee said.

'Not Mad at Anybody'

One year after that decisive defeat, Huckabee learned another lesson about the unpredictability of politics.

In '92, the same year Huckabee lost his Senate campaign, Arkansas Gov. Bill Clinton was elected to the presidency. Clinton's lieutenant governor, Jim Guy Tucker, took over as governor. Huckabee was recruited by Republicans to run for the lieutenant governor's seat in a special election and won.

And then, three years later, the unexpected happened again. Gov. Tucker was indicted and convicted in the Whitewater scandal and forced to resign. Huckabee suddenly was governor, only the fourth Republican to hold the office since Reconstruction in a state dominated by Democrats.

Rex Nelson, Huckabee's communications director when he was governor, said that Huckabee's harshest criticism came not from Democrats, but from very conservative Republicans, especially over his contentious consolidation plan that would shut down many rural schools.

"I'm a conservative, but I'm not mad at anybody about it. I've learned that you don't have to give up your own convictions," Huckabee said. "But you do need to be willing to have an open mind, spirit and heart toward people who are completely different from you."

In August, Huckabee was ranked second in the Iowa Republican straw poll. Polls in Iowa now show him at the top of the second-tier candidates — behind Mitt Romney, Rudy Giuliani and Fred Thompson. Before running for president, the conservative Huckabee was best known as one of two famous governors from Hope, Ark. — the one who lost 110 pounds.