Accessibility links
The Go! Team Is Still Having Fun Ian Parton used to be the band's sole member, but his love of horns, hip-hop samples and female singers means the group keeps getting bigger. Proof of Youth, the band's second album, is just as fun as Thunder, Lightning, Strike, but stronger and louder.

Listen
The Go! Team Is Still Having Fun

Songs from 'Proof of Youth' 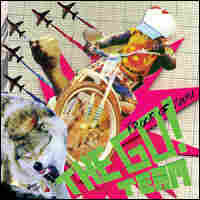 Proof of Youth is The Go! Team's follow-up to its 2005 debut. hide caption

Once a solo basement project, Britain's The Go! Team is now six members strong and getting stronger, but it's still the brainchild of Ian Parton of Brighton, England. Parton was a young documentary filmmaker with a specialty in archaeology who long ago began creating songs on a sampler in his basement. Given the way these songs recycle sonic artifacts and musical cultures, they seem like archaeological documentaries themselves, with some dirt on them.

Lisa Lee and Sharrock are the virtual guest vocalists on "Grip Like a Vice," and not just any virtual guest vocalists — they're legendary one-cameo wonders from landmark 1980 records by Afrika Bambaataa and the Funky Four Plus One. Now, miraculously, Parton has fashioned the perfect music for rhymes they freestyled in a 1984 BBC documentary. Thus, he becomes one of the few to actually revive the innocence of early hip-hop, rather than stiffly imitate it like so many underground rappers. Yet the song begins with noisy guitars morphing into atonal guitars — not exactly early hip-hop. Just two more sounds that Ian Parton loves, and folds in. Though he has Public Enemy's Chuck D rap live toward the climax, Parton goes for female voices. Elizabeth Esselink, sole proprietor of the Dutch electro band Solex, has never sounded so girl-group.

Another sound Ian Parton likes is horns. These were sampled on The Go! Team's 2004 debut album Thunder, Lightning, Strike. But when the debut became a hit, Parton needed a human group to tour, and so he hired human horn players, and on the second album they do their thing, especially on "The Wrath of Marcie," featuring three indigenous Go! Team brass guys and two indigenous Go! Team female vocalists.

The Go! Team's first album made the silly myth about lo-fi sound conveying truth and beauty come true, only now he's made a very similar album in the studio. It's hardly clean-sounding — Parton loves to jam things together. But it's got volume and presence; it's twice as strong sonically with no loss of ebullience or directness. This is the fun electro-poppers Basement Jaxx advertise for their jingles, the youthful vigor Malcolm McLaren perverted in Bow Wow Wow when Parton was attending infants' school. It's positive without corn, which is pop music's main reason for being.