Accessibility links
A Different Type of Hip-Hop Battle This past Tuesday, two rival rappers released new CDs on the same day. Kanye West and 50 Cent both rank among the most popular artists making hip-hop today. But the so-called feud between the two stands apart from others in the history of the genre.

Hear tracks from 'Graduation' and 'Curtis':

Straight to the Bank 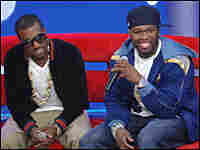 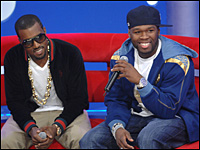 Only the most jaded music fan could ignore this week's big hip-hop news: the showdown between two of the biggest names in rap.

Each artist has bragged about his supremacy over the other. 50 Cent, whose real name is Curtis Jackson, even said that if West's record outsold his own, he would retire from making solo albums — and he's 32. Weekend Edition Saturday's Scott Simon spoke with Mazi Mutafa, executive director of an arts and educational nonprofit dedicated to hip-hop called Words, Beats & Life, to learn more about this so-called feud.

It's a strange feud, Mutafa says, because Kanye West and 50 Cent are not generally compared to each other. Though they generally share similar subject matter, the two approach it from vastly different perspectives.

"The primary difference between [West] and 50 is that Kanye has zero songs about killing anybody," Mutafa says. "Whereas the great majority of what 50 Cent has recorded has him either being shot by someone, shooting someone, trying to shoot someone."

Mutafa also said that this was an unusual sort of beef between artists.

"Most artists don't debate record sales," he says. "Usually the standard of who's a good artist isn't who's going to sell the most units — it really is who's the better MC."

Hip-hop history has seen a number of famous faceoffs through the years, some turning violent. But many have called this rivalry a marketing ploy, as both artists are signed to the same record label. Mutafa tends to agree.

"Part of the reason why you see mainstream media and NPR today taking interest in this story is because of what people think it might turn into," Mutafa says. "But the reality is that it's just about business. It's about slumping record sales for rap music labels, and a desire to make better music that consumers actually want, and to draw in the attention of people who have kind of written hip-hop off."

"What we're witnessing right now is a kind of corporate theater," he says. "This is not even remotely personal; it's completely about who's going to sell the most records."

In this case, Mutafa says this is an easy rivalry to pick: Besides his violent rhymes, "one of the other things that [50 Cent is] really popular for is drama." Mutafa notes that the Queens-born rapper recently released all the artists on his own record label for lack of sales, including one — called The Game — with whom he had more serious conflict.

"But I wanted to make a statement about the kind of music I want to see more of. And so if I have to choose between who's going to win this battle, I'd like for Kanye to win this battle, because I feel like from project to project, I've seen more artistic growth. I like the fact that he doesn't make music about killing people."