Accessibility links
Climate Changes Lives of Whalers in Alaska Traditionally, the Yupik people have survived on St. Lawrence Island by hunting whales and walrus in the surrounding ice sheets. Later freezes and earlier thaws are changing the island's landscape and the community's livelihood and culture. 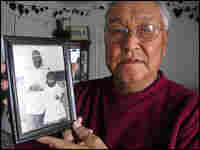 Leonard Apangalook, a 68-year-old Yupik man, views a photo of his father and grandfather. hide caption 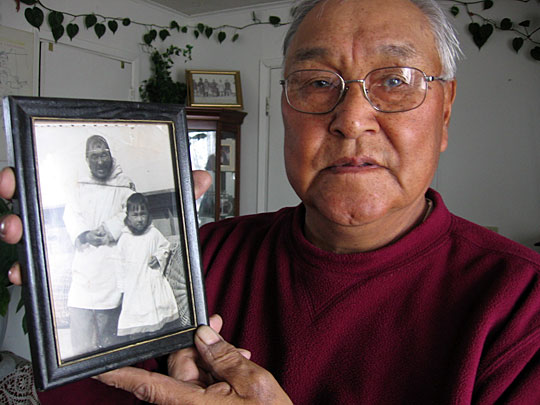 Leonard Apangalook, a 68-year-old Yupik man, views a photo of his father and grandfather. 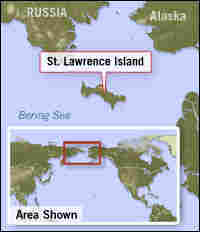 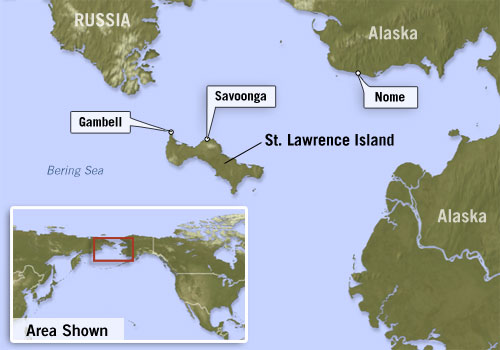 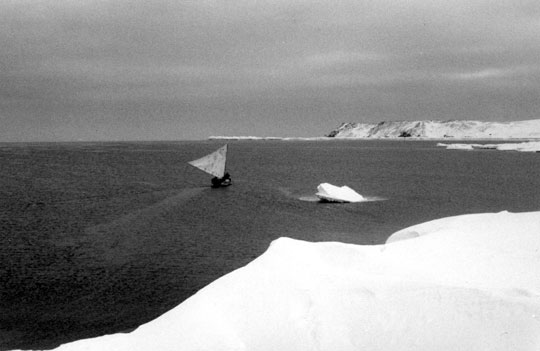 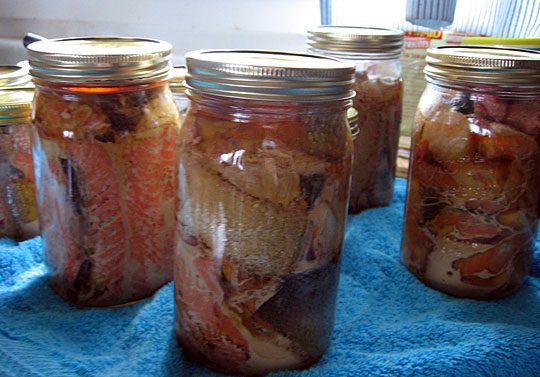 Jars of preserved salmon will provide food long after the hunt. 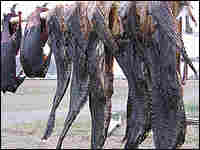 Meat from a hunt is hung out to dry. The Yupik people take great care to maximize the yield of their hunt. Melissa Block, NPR hide caption 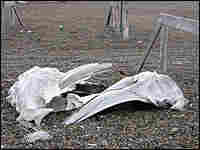 Whale skulls remain on a beach after the meat has been stripped from the bones. Melissa Block, NPR hide caption 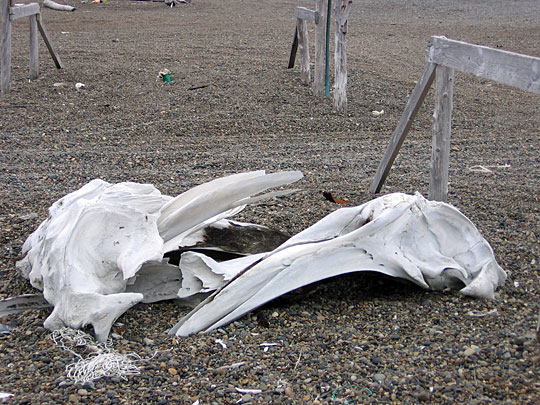 Whale skulls remain on a beach after the meat has been stripped from the bones. 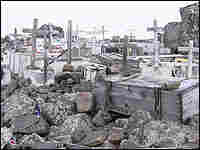 The cemetery for the town of Gambell, on top of Sivuqaq mountain overlooking the village. The coffins used to be carried up the mountain; now they're brought up the mountain on all-terrain vehicles. Melissa Block, NPR hide caption 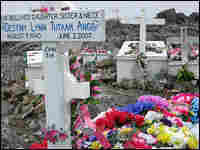 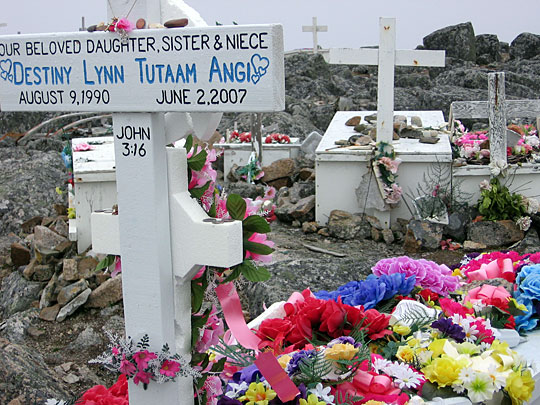 St. Lawrence Island is remote and treeless, floating in the Bering Sea 38 miles from Siberia and nearly 200 miles from the mainland of Alaska. It is inhabited by the Yupik people who migrated from Siberia and settled on the island more than 2,000 years ago.

There are two villages on St. Lawrence Island, each with a population of about 700. They first got electricity and telephone service in the 1970s. Some homes still have no running water.

The people of St. Lawrence are subsistence hunters. They hunt walrus, seals and bowhead whales. They're given an annual quota for the whale catch.

Leonard Apangalook, a 68-year-old Yupik man, lives in the town of Gambell. On his kitchen counter are 10 glass jars filled with salmon he caught, preserved and stored for the winter. Strips of walrus and seal meat hang on meat racks to dry outside.

"I was born in a little cubicle of a house with two seal oil lamps. We were a very strong subsistence community, but times have changed now," Apangalook says.

During hunting season, Apangalook and the other men of the village walk down to the beach several times a day to check on the weather and the ice to see if it's safe to go out.

The whale hunters sail out in wood-frame boats covered in walrus skin.

When a whale is caught, the atmosphere in the village becomes electric with excitement. The school empties and everyone gathers at the beach to help with butchering. The whale meat and blubber — or mungtuk — are divided among the villagers and are then frozen for food in the winter months.

As part of the hunt, Apangalook has kept a meticulous daily weather journal for 20 years. He pulls out a neat stack of bound volumes edged in gold.

The journals reflect something the people of St. Lawrence Island see year after year — the ice is coming later in the year and retreating earlier. It is thinner and more flimsy, making it dangerous for hunting. Polar pack ice, ice that builds up over many years, has not been seen for eight years.

Studying ice is second nature to the people of St. Lawrence Island. There are 99 Yupik words for different kinds of ice. In a dictionary that Christopher Koonooka translated from Yupik to English, there are words describing wavy ice, shore fast ice, small cakes of ice, and thin ice overlapped like shingles.

Branson Tungiyan is the general manager for the village of Gambell. He calls the Bering Sea his garden, but Tungiyan describes how changing weather is affecting the ice and the ocean.

"The weather has been crazy these last 10 years. Unexpected warming in the middle of wintertime, cooler temperatures in the springtime where it should be warm. The ice is getting thinner. Now we're seeing it come in what they call ice in January and one time February. So we believe what the scientists are saying that the ice is melting," Tungiyan says.

Perry Pungowiyi is the captain of a whaling crew in Savoonga, the other village on St. Lawrence Island.

Pungowiyi and other subsistence hunters rely on ice because it acts like a big conveyor belt, bringing in walrus and seals. This spring, Pungowhi and his crew caught three bowhead whales — an unusually substantial catch.

Pungowiyi's wife Adeline is a teacher's aide with Head Start. She says that last year the ice didn't come until December.

"That was so, so surprising," Adeline says. "Usually when I was growing up we'd start getting snow end of August, September, and we knew it was time to go back to school. And now it's just different. We won't get snow until December nowadays."

Climate change is not ending whaling, but it is causing shorter seasons and extreme, unpredictable weather. Less ice results in more dangerous seas because ice acts as a barrier from ocean swells. Now severe storms come in quickly and without warning.

The Loss of Life

An old cemetery overlooks the village of Gambell. The coffins are exposed above ground, wedged in between gray boulders. Some are freshly painted, like the one for Leonard Ray Nowpakahok.

The cross on his coffin says: "Young man, buckshot, bowhead whale rider." He was 11 years old when he died in 2005 in a whaling accident.

The boy was out with his uncle and four others in a walrus-skin boat. They were towing in a 40-ton bowhead when the winds shifted. A storm came up fast and the boat capsized.

The crew radioed for help, but the seas were too rough. Four members of the crew drowned — including the mayor of Gambell, his 11-year-old daughter, Yolanda and Leonard, his 11-year-old nephew.

Near Leonard's casket is another freshly painted casket covered with bright plastic flowers. Friends have left mementos — a penny, some pebbles, a necklace — on the cross.

John Apangalook reads the words painted on the cross, "This girl was Destiny Lynn Tutaam Angi. She was born 1990 August 9 and she died June 2 2007 — in the morning."

Alaska's suicide rate is three times higher than the national average, and the youth suicide rate on St. Lawrence Island is said to be the highest in Alaska. Drugs, alcoholism and violence are immediate and constant crises.

Apassingok sees a generation of young people who can't speak the native language of Yupik, and whose taste for chicken nuggets and pizza has replaced the taste for native, traditional foods.

"That space between the whale and me is a time honored space. I don't know if any one whaler can express accurately what goes on in the mind, but for me it's very, very deep. Because we dream about these whales. When you dream about something like that, there's a very deep connection. ... I think that connection, that deep connection with the animal. You know, it's not just nutrition, it's not just ceremonial, it's not just religious. That's how God made us. God created us. God picked us, hand picked us for this region, this spot right here," Apassingok says.

The distant island is changing in ways large and small. Leonard Apangalook, the man who has kept daily, hand-written weather logs for 20 years has put down his pen. This summer, he got a computer.

"We're more and more melting into the new lifestyle and I think one day we probably won't hunt anymore," Apangalook says. "That is inevitable and will be the situation hence. But we're not quite ready for that yet."