Accessibility links
Rookie Chicago Principal Faces Early Challenges In Chicago, where one in three schools has a new principal, Lisa Moreno is the new head of John D. Shoop Academy. Like many new principals around the country, Moreno faces a range of challenges — from curbing bad behavior to improving standardized test scores. 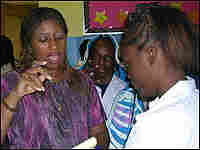 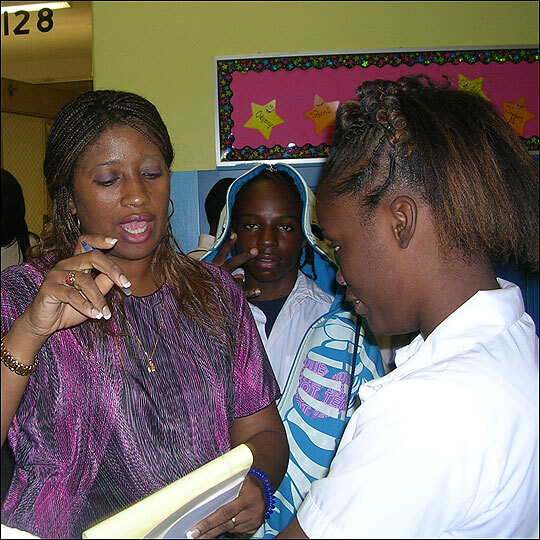 Lisa Moreno, principal of Chicago's John D. Shoop Academy, talks with eighth graders at the end of the school day. 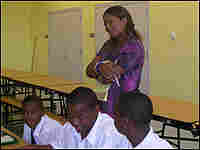 Moreno stands behind a table of eighth-grade boys. She says her presence in the lunchroom helps preserve order. David Schaper, NPR hide caption 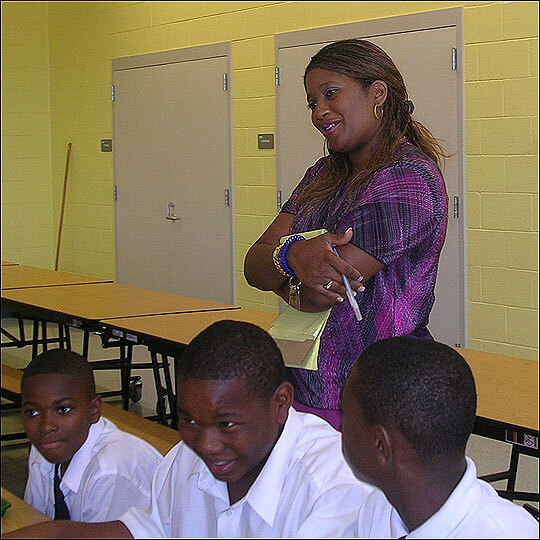 Moreno stands behind a table of eighth-grade boys. She says her presence in the lunchroom helps preserve order.

At the John D. Shoop Academy on Chicago's South Side, Principal Lisa Moreno ushers students inside for an early breakfast.

She greets her uniformed flock, then heads to the playground, where she keeps a close eye on some of the eighth graders who are already testing her staff.

"You just try to make sure that they don't think that they run the school," she says.

Moreno is one of 170 new principals in the Chicago public school system this year. Since 2004, more than 350 of the school system's principals have retired, taking advantage of early retirement incentives. Like Chicago, many other school systems across the country are facing the same turnover, as baby boomer principals near retirement age. And for the rookie principals, challenges come early and often.

In Chicago's system of 641 schools, more than one of four of those schools is being led by a rookie like Moreno. In the early days of class, it can be hard for a new principal to get ahead and focus on a primary mission: raising standardized test scores.

Shoop Elementary School has been on academic probation for four years for not meeting adequate yearly progress, or AYP, under the No Child Left Behind Act. All of Shoop's students are black, and more than 90 percent of them are low income, qualifying for free or reduced-price meals.

When Moreno returns to her office after breakfast, staff, parents and students pack the room; some of them are still registering for classes more than a week after school began. It's a frustrating problem that means some classes might grow too large, with students starting off behind the rest of the class.

After morning announcements — with a new public-address system that still has some kinks — Moreno answers messages, returns a few calls and completes some administrative tasks. Then she sets out down the halls, poking her head into classrooms. Moreno says it's important to keep a tight watch on what's going on in her building is important.

"I don't like suprises," Moreno explains. "So if a parent calls and says, 'My kid says they're not doing anything,' I like to be able to say, 'Well, you know, I was there yesterday and when I went by, they were working on fractions, or they were doing a writing activity.'"

Moreno says she believes one of a principal's most critical skills is interpersonal — being able to calm an angry parent, student or staff member and then motivating all of them to work harder toward improving classroom performance. But to do that, she needs to eliminate or at least limit the nearly constant outside distractions, from students' fights to trouble in the neighborhood and at home.

Balancing the various tasks is also a challenge, Moreno says.

"You are always multi-tasking," she says. "You are always present. You have to change at a moment's notice. Any time, you're asked to make several different decisions at one time."

"If we can just get the students to focus more on instruction and they are truly engaged, they are not going to get into the other things. The logistical things, they should work themselves out."

Amid constant interruptions — phone calls, deliveries, book orders and other issues — Moreno tackles one of her biggest challenges: student behavioral problems. She meets with a concerned parent whose 7-year-old child was allegedly sexually assaulted by an older student off of school grounds.

It's the older students who are her most vexing problem. Around 2:45 p.m., at the end of the school day, Moreno breaks up a fight among seventh graders. She says she's particularly irritated by the eighth graders, who she was hoping would act more maturely.

A half-hour later, Moreno sits down to take stock of her day. She rattles off a long list of tasks she didn't get to during the day — from planning the next day's school assembly, to figuring out whether to create a new mixed class of sixth and seventh graders to reduce overcrowding.

And she's keenly aware that she didn't get to spend much time on the one thing that will determine whether she keeps her new job for more than a year or two: Raising standardized test scores. But overall, Moreno says she's satisfied.

"This was actually a mild day. I've had some challenging days," she says.

So after a day in which she was part cafeteria manager, registrar, disciplinarian, social worker, procurement officer, nurse, human resources officer, and chief financial officer of a multi-million-dollar budget, she took some time to reflect on the primary job she has ahead of her this year: being the instructional leader of a school that must raise its test scores by 10 percentage points across the board, or face increased sanctions under the federal No Child Left Behind Law.

She acknowledges that there is "a sense of urgency" in the school this year, and that it's "really, really critical" the school achieves the required increase in test scores. But she adds, "I don't even want to think about the fact that if those gains would not be made .... I just think we can do it. I think we can make those gains."

"I think it's important that I don't focus on, 'Oh, if we don't make it.' Because if I spend all my time focused on, 'If we don't make it,' then we won't make it .... I'm expecting us to make it because [the changes] that we've made have been very positive and that they were made to set us up for success, so I'm anticipating making it."