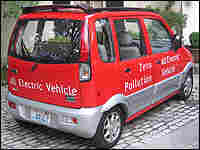 Miles Automotive's ZX40 all-electric hatchback is for sale at dealerships around the country. It runs for about 50 miles on a charge, with at top speed of 25 mph. Elizabeth Shogren, NPR hide caption 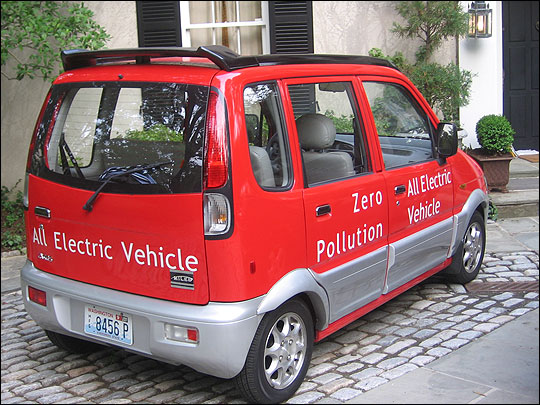 Miles Automotive's ZX40 all-electric hatchback is for sale at dealerships around the country. It runs for about 50 miles on a charge, with at top speed of 25 mph. 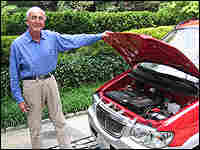 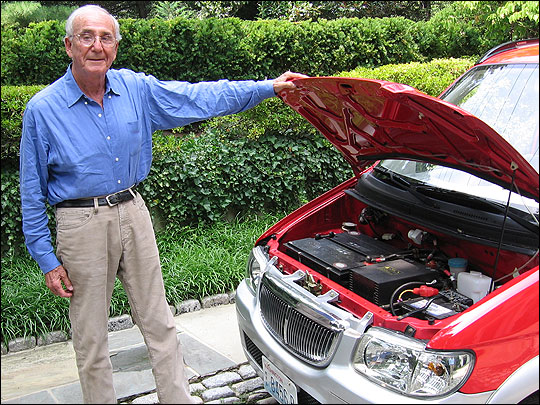 Miles Rubin opens the hood of the electric ZX40 hatchback. Rubin hopes to bring a highway-speed electric sedan to the U.S. market by early 2009.

Miles Rubin is nearly 80, but he delayed retirement to take the biggest challenge of his professional life: building low-polluting, electric vehicles.

Rubin is already selling a low-speed all-electric car, and he plans to start selling a highway speed sedan by early 2009. Rubin said the cars — which are built in China-- are his way of trying to fight climate change.

"I think everybody has to do something. We can't just depend on governments. Yes it will take government action to make a change, but we can't sit back and wait for Congress," Rubin said.

The electric car has been an elusive dream of environmentalists and automakers for decades. But with growing concerns about global warming, the idea is attracting a new generation of entrepreneurs who, like Rubin, are hoping better batteries will make electric cars practical this time around.

Rubin is a mega-millionaire who made his money trading Chinese silks and medical devices. In the '90s, he ran Ralph Lauren's Polo Jeans. Now he's putting money into his new company, Miles Automotive.

"Electric motors have great initial torque so as you start the car you're moving right from the outset almost at full torque," Rubin said.

A four-door hatchback Rubin called the ZX40 is peppy on flat ground, but it barely crawls up a steep hill.

It won't replace the family minivan, but Rubin hopes it will help him finally jump start the electric car market. It costs about $15,000.

Rubin has sold about 300 of them during the last few months. It's best suited for college campuses, military bases and corporate parks with low speed limits. NASA, the Navy and several universities have purchased the cars.

The car can charge by plugging it into any wall socket.

Electric cars help fight global warming because they contribute less greenhouse gases to the atmosphere than gasoline-powered cars, even if the electricity is made in a coal-fired power plant.

Rubin's plan to build these cars took root four years ago when he visited a Chinese factory that makes lithium ion batteries, which are used in laptops and cell phones. Soon he was urging the Chinese company to scale up the batteries for cars.

Rubin's passion for the environment dates back to the 1970s, when he worked with actor Paul Newman to get Congress to promote new sources of energy. But when the oil crisis lifted, interest waned. Rubin hopes this time around, the threat of global warming will keep people focused.

Rubin said he has spent $35 million of his own money, and he expects he will need to double that figure to get his new highway speed car to market. Rubin expects his speed car will go 80 miles per hour, with a range of 120 miles, and will cost $30,000.

Of course, Rubin's not the only one trying to build electric cars, but most of the other vehicles in the works would be very expensive. One of them, the Tesla roadster, is due out later this year with a price tag of $100,000.

Rubin admits he's faced some skepticism, even from his wife.

"She said, 'Miles what do you know that the auto industry doesn't know?' And I said, 'Nancy, very little.' Now that I think of it almost nothing," Rubin said.

"This is an enormously difficult industry to break into for an outsider," said David Cole, who heads the Center for Automotive Research at the University of Michigan. "A great many people have tried, have had very optimistic ideas about bringing a product to market, and it just hasn't worked out."

Cole predicts it will take several years before the lithium ion batteries are ready. Toyota recently backed away from one version. A big challenge is preventing the batteries from overheating.

Nevertheless, Miles Automotive has already signed dozens of dealers around the country.

"We do believe in the Miles product. And we believe that this will give us the best opportunity to get our message out there with partnering up with some body that we feel is steps ahead of everybody else," said Scott Sandler, who owns E-Car Auto dealership in Chicago.

Sandler has sold 30 of the low-speed cars already. He said Rubin personally won him over.

"He was the reason I was sold on his versus other people's [cars]. And we could have gone to many other distributors of electric vehicles. But I just felt that that Miles cared about what happens to the world, the economy and global warming," Sandler said.

And at 78, Rubin said he's already made a lot of money. Now he's hoping to make a difference.

"Things will happen very quickly," Rubin said. "And I hope we're on the leading edge of it, not just to be first, because I'd like to say in this point of my career that I was able to make a change that mattered."