Accessibility links
Judge Michael Mukasey Tapped for Attorney General President Bush nominated Judge Michael Mukasey to be the next attorney general. And if the Senate confirms him, he will have only 16 months on the job. That's a short amount of time to accomplish a long list of tasks, including restoring morale at the Department of Justice and domestic spying.

President Bush nominated Judge Michael Mukasey to be the next attorney general. And if the Senate confirms him, he will have only 16 months on the job. That's a short amount of time to accomplish a long list of tasks, including restoring morale at the Department of Justice and domestic spying.

President Bush nominated Judge Michael Mukasey yesterday to be the U.S. attorney general. And if the Senate confirms him, he will have only 16 months on the job. That's a short amount of time to accomplish a long list of tasks -as NPR's Ari Shapiro reports.

ARI SHAPIRO: When Judge Michael Mukasey spoke in the White House Rose Garden yesterday, he put his finger on a reality that any new attorney general will have to face.

Judge MICHAEL MUKASEY (Retired; U.S. Attorney General Nominee): The department faces challenges vastly different from those it faced when I was an assistant U.S. attorney 35 years ago.

SHAPIRO: Those aren't just big intangible challenges like restoring morale at the department, although he needs to do that too. There are also very specific, detailed policy challenges, like domestic spying. Congress passed a temporary fix to the Foreign Intelligence Surveillance Act but it's going to expire in January. The new attorney general will have to broker some sort of permanent agreement between the White House and Congress.

The attorney general is also in the crossfire on executive privilege. Congress wants documents from the White House about U.S. attorney firings and other controversies - the president refuses to hand them over. And then there are debates that have never stopped raging in the last six years about detainee treatment, interrogation practices, and other such issues.

The new attorney general will undoubtedly have public clashes with Congress and civil rights groups on these issues. And if the recent spate of tell-all memoirs from administration insiders is any indication, there may well be even more intense private clashes behind the scenes with officials from the president and vice president's staff.

For Michael Mukasey, who spent almost 20 years as a federal judge, this could take some getting used to. As a member of President Bush's cabinet, he may have power, but his opinion will no longer be the final verdict. 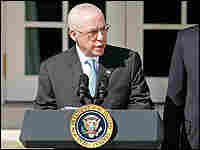 1988-2006: Judge of the U.S. District Court for the Southern District of New York (including six years as chief judge)

1972-76: Assistant U.S. attorney in the criminal division of the Southern District

Mukasey, 66, was nominated to the federal bench in 1987 by President Reagan. During his tenure on the bench, Mukasey earned a reputation as a no-nonsense law-and-order judge, steeped in the intricacies of national security.

For 19 years, he presided over a series of high-profile cases, including the 1993 prosecution of "the blind sheikh" Omar Abdel Rahman, whom he sentenced to life in prison for plotting to blow up several New York City landmarks including the World Trade Center. In the 1996 sentencing of Abdel Rahman and co-conspirators, Mukasey accused Abdel Rahman of trying to spread death "in a scale unseen in this country since the Civil War."

Mukasey's Manhattan courthouse was located just blocks from the twin towers that were eventually destroyed in the Sept. 11 terrorist attacks.

Born in the Bronx in 1941, New York is in Mukasey's blood. He earned an undergraduate degree from Columbia University and worked for a time as a reporter. Mukasey left journalism to pursue a career in law — attending Yale Law School.

Early in his legal career, he worked as a prosecutor in Manhattan, serving under then U.S. Attorney Rudolph Giuliani. The two New Yorkers remain close; Mukasey and his son are both legal advisers to Giuliani.

At times, Mukasey's professional life has spilled over into the personal. He and his wife have had around-the-clock protection from U.S. marshals for the past eight years due to the nature of his cases — an unusual but not unprecedented need for federal judges.

Mukasey's writings provide a window into his views on sensitive national-security issues. Commenting on the recent trial of Jose Padilla — the so-called "dirty bomber" — Mukasey argued that the guilty verdict was no cause for celebration.

"Current institutions and statutes are not well suited to even the limited task of supplementing what became, after Sept. 11, 2001, principally a military effort to combat Islamic terrorism," Mukasey wrote in the Wall Street Journal in August. He went on to offer tepid support for the establishment of a separate national security court "staffed by independent, life-tenured judges."

Mukasey is no stranger to the Padilla case. As district judge, he authorized Padilla's arrest in 2002. He backed the White House's view that Padilla could be held as an enemy combatant, although his decision was later overturned on appeal.

In a 2004 article, also in the Wall Street Journal, Mukasey defended the Patriot Act against charges that it eroded civil liberties. In particular, he defended "sneak-and-peek" warrants that allow agents, with court authorization, to enter premises, examine what is there and then leave.

"Here too, the logic seems obvious: If you leave behind a note saying 'Good afternoon, Mr. bin Laden, we were here,' that might betray the existence of an investigation and cause the subjects to flee or destroy evidence," Mukasey wrote.

Mukasey has often ruled in favor of the prosecution but, at times, has sided with the defense. Last year, he ordered a mentally ill woman released from jail after she was charged with helping an Iraqi spy agency under Saddam Hussein. Rebuffing prosecutors who brought the charges, Mukasey said, "there is no indication that [she] ever came close to influencing anyone, or could have."

Throughout his career, Mukasey has expressed strong support for an independent judiciary and bristled at perceived attempts by other branches of government to step on judicial turf.

"They [Congress] can have their blacklist but we have life tenure," he was quoted as saying in a 2003 New York Times article about congressional attempts to monitor whether judges are adhering to mandatory sentencing guidelines.

Support from Both Sides of the Aisle

Commentators on both ends of the political spectrum were quick to praise President Bush's choice to head the beleaguered Justice Department.

"He is intelligent and grasps very difficult issues very quickly," said Mary Jo White, former U.S. Attorney for the Southern District of New York, speaking on NPR's Day to Day program. She rejected suggestions that, as attorney general, Mukasey would merely speak for the White House.

"He is his own person. He deals with the issue in front of him in a very hard-nosed intellectual way, and with a ramrod sense of fairness," she said.

"While he is certainly conservative, Judge Mukasey seems to be the kind of nominee who would put rule of law first and show independence from the White House, our most important criteria," said Sen. Chuck Schumer of New York, a senior Democratic member of the Senate Judiciary Committee.

If confirmed, one of Mukasey's first challenges will be restoring morale among the Justice Department's 120,000 employees, after the troubled tenure of former Attorney General Alberto Gonzales.

Judging by the response of conservative commentators, Mukasey can count on their support during the confirmation process.

"My advice is this: Conservatives should hold their fire, support the president, enjoy watching Chuck Schumer hoist on his own petard, and get ready for a strong attorney general for the rest of the Bush administration," said William Kristol writing in the Weekly Standard.

Sam Buell, a former federal prosecutor, said there is little chance of a "Harriet Miers situation," referring to President Bush's ill-fated attempt to nominate his longtime friend and White House counsel to the Supreme Court.

"Even if there are people who are crying on the right, there will be other people who will say, 'Come on, this guy has a fabulous resume. How could you say he is not an appropriate attorney general?'"