Accessibility links
To Bill Belichick, a Question: Why Cheat? Leading the New England Patriots to three Super Bowl championships, Bill Belichick has a resume that any NFL coach would envy. So why would he tarnish his reputation by cheating?

Listen
To Bill Belichick, a Question: Why Cheat? 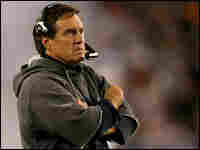 Head coach Bill Belichick was fined $500,000 and the New England Patriots $250,000 for videotaping the signals of the New York Jets during a game. The Patriots will also lose a first-round draft pick. Nick Laham/Getty Images hide caption 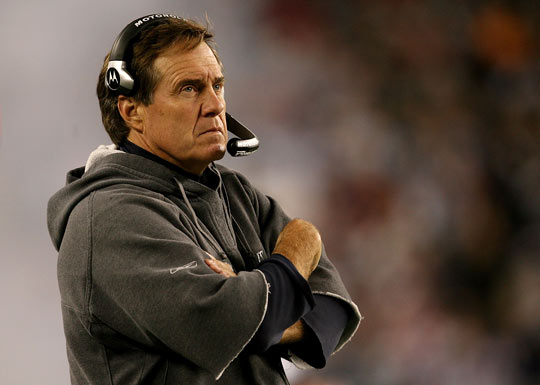 Head coach Bill Belichick was fined $500,000 and the New England Patriots $250,000 for videotaping the signals of the New York Jets during a game. The Patriots will also lose a first-round draft pick.

Talk About the Belichick Scandal in the NPR News Blog.

The New England Patriots' videotaping of the New York Jets' sideline in order to steal their signals calls to mind the rich history of cheating in sports. Read about some of the most notorious instances of sports cheaters.

Bill Belichick has a resume that any NFL coach would envy. In his first seven seasons as head coach of the New England Patriots, Belichick led his team to three Super Bowl championships, three conference titles, and five division crowns. Which leads Commentator Frank Deford to wonder why Belichick and the Patriots would steal signals from an opposing team.

I am always touched when, after all the savagery of a football game, the opposing players and coaches mingle pleasantly in the middle of the gridiron. So it is that my lasting image of Bill Belichick came at the conclusion of the AFC championship game in January after his Patriots had been beaten by Indianapolis.

The Colts' magnificent quarterback, Peyton Manning, spotted Belichick and sought him out in a crowd. But Belichick ducked away, brushing by Manning, refusing to pay homage to the man who had been most responsible for his team's defeat. The look on Manning's face: some embarrassment, but mostly, it seemed, disappointment mixed with surprise.

Somehow it struck me as all the sadder because Manning and Belichick were not just football ships passing in the night. They are shared heirs of the game. And more sweetly: they are triumph, the children of devotion — Manning, the son of the gallant Archie, who was himself a superior quarterback doomed to bad teams; Belichick, the son of a lifelong coach who toiled in the vineyards, never approaching the glory his son would enjoy. Belichick's biographer, the late David Halberstam, gamely played up this angle, desperately trying to infuse some warm blood into his cold, cold veins.

Now, though, we see Belichick as not merely surly and ungracious — a pigskin match for the diamond grouch who bares his duplicate initials: BB, Barry Bonds — but, likewise, a defiler of his game.

To me, in fact, Belichick, is most analogous to Richard Nixon. Both men were so smart, yet so uncomfortable. Both could never accept the success they carved out for themselves. Perhaps, even after three Super Bowls, Belichick never feels that he deserves to be in the best company, for he himself was no good as a player.

And for both, all so pointless. Everything else aside about Watergate, it wasn't necessary. Nixon was a lock to win the next election — and he did, taking 49 states. What intelligence could he possibly steal from the Democrats? Belichick's Patriots are better than ever. What could possibly be gained by stealing signals from some hopelessly outmanned opponent?

Commissioner Roger Goodell could have punished Belichick even more harshly than he chose to. But, then, why bother? The shame that Bill Belichick suffers is worse than any penalty. He cheated the game of football, tarnishing the one thing he seems to care for. His genius and his victories alike will forever be suspect. At least Nixon always had China.