Accessibility links
Kansas City's Wholesome Image Belies Mob Past Kansas City these days seems like a bastion of wholesome, Middle-American values. But from the 1920s to the 1960s, the city was a haven for gamblers, bootleggers and a corrupt political machine. 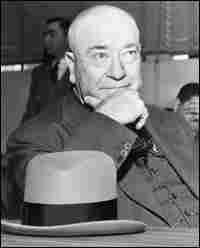 Tom Pendergast appearing in court in 1939, where he pleaded guilty to charges of income tax evasion. Pendergast ran Kansas City's political machine during the 1920s and '30s and had close ties to the mob. After Pendergast fell from power, his lieutenant, Charles Binaggio became the new leader of the city's underworld. Bettmann/Corbis hide caption 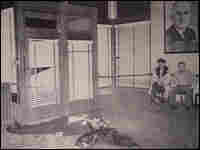 The body of gangster Charles Gargotta lies beneath a portrait of President Harry Truman inside the First Ward Democratic Club in Kansas City. Gargotta and mob boss Charles Binaggio were lured to the club by unknown persons and shot at close range on April 5, 1950. The case was never solved. The murders led Congress to appoint a special committee to investigate organized crime. Courtesy Terence O'Malley hide caption 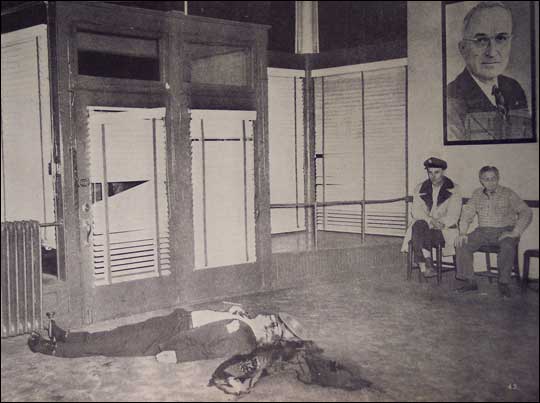 The body of gangster Charles Gargotta lies beneath a portrait of President Harry Truman inside the First Ward Democratic Club in Kansas City. Gargotta and mob boss Charles Binaggio were lured to the club by unknown persons and shot at close range on April 5, 1950. The case was never solved. The murders led Congress to appoint a special committee to investigate organized crime.

"Johnny Holiday" greets passengers with "How you's doin' today?" and "How are ya's?" as they step on board Kansas City's gangster bus tour.

The mob in Kansas City? It just doesn't sound right. But in fact, Kansas City has a rich history of very bad guys.

Johnny Holiday is actually Tim Phillips, a 36-year-old actor who adopts the wise-guy persona to lead these tours. He's dressed in a gangster-cut, '20s-era pinstripe suit and fedora.

"Al Capone, that's true," agrees Phillips. "Right up here is the Rieger Hotel, where Al Capone used to stay ... when he came here to Kansas City."

There's also the Bellerive Building, where Capone threw parties with entertainers like Frank Sinatra and Liberace.

The Hotel President used to have a popular speakeasy, with an underground entrance to tunnels that were used to smuggle in bootleg booze.

And then there's 12th Street, where a gambler named Slicey Sauly Weissman coined the colorful gangland term, "we're taking this guy for a ride."

If you're a mob nut, Kansas City is a very happy place to be. Ask Terence O'Malley. He's a local attorney, a reformed journalist and an amateur mob historian who is at work on a documentary about Kansas City's gangland past. O'Malley says during the Great Depression, the Sicilians ran crime and the Irish ran politics.

"Kansas City's mafia was so closely connected to politics during its formative years," he says.

The big boss was Tom Pendergast, a former city councilman who held onto power even after leaving office. He understood getting people together — say, mob guys from Sicily and Democratic politicians — to work on common interests. He may not have been running himself, but Tom Pendergast won a lot of elections and gangland politics was thriving.

Even during Prohibition, it was very easy to buy a drink in Kansas City — or company for an evening out on the town. And Kansas City was known for its good times.

"It's the music, baby," exclaims O'Malley. "That's just another thing that made it a raucous, wild, fun place to be. It was known as a wide-open town."

Seedy into the 70s

When liquor became legal again, the old speakeasies turned into bars and nightclubs, but the mob guys hung around. By the 1970s, a seedy-looking neighborhood called River Quay was a violent place. Charles Gray was a reporter on the crime beat. He remembers some of the more notable crimes.

"Nick Spero was killed and left in a car trunk," Gray begins the list. "David Bonnadonna was killed. John Broccato was found in car trunk. He'd been frozen, tortured and strangled. [They] shot Carl Spero in the back, severed his spinal cord. He was paralyzed for life, but life wasn't very long for him because they got him with a bomb later in his wheelchair."

"They have some quaint ways of dealing with each other," says Gray.

But the Kansas City gangsters who survived did well. They ran a skimming operation in Las Vegas and were the model for Martin Scorsese's mobsters in the movie Casino.

But in the end, that was pretty much it. The FBI eventually broke the skimming operation and rolled up most of the Kansas City mob. They went to jail. They died.

And Kansas City got respectable.